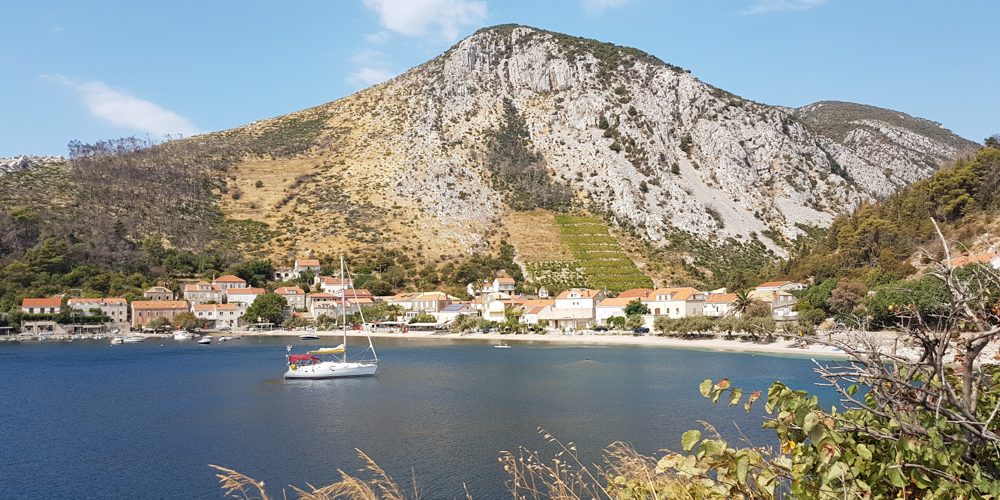 
It’s that stage in the trip now where it feels like we’ve been here for ages, yet how has the time gone so quick? Our final day of cycling takes us across the straits to the mainland, then over the hills of the Peljesac Peninsula to Ston. 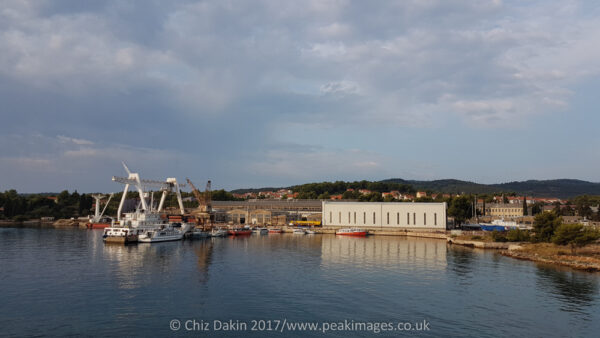 First though there’s the dilemma of which ferry to catch. If we go for the 9am one, we can have breakfast first. But we may be late arriving in Ston. So we opt for the safer (and cooler) option of the 8am ferry, collecting yet another chocolate croissant in Orebic on the far side. 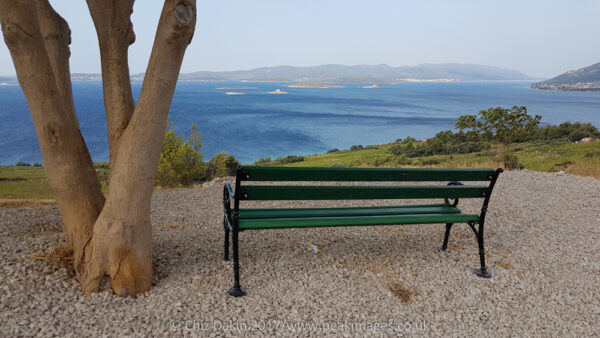 Looking back to Korcula from the outskirts of Orebic

And then the hills start in earnest.

It’s meant to be the toughest day of the trip though. 60km min, with a 4pm finish time needed and 1100m of ascent.

In 30+C heat, that’s rather more of a challenge! We met a couple of folks also using Meridien 10 at one of the beaches yesterday. They were going in the other direction, from Dubrovnik to Split, and had been glad to get the toughest day over and done with at the start. Me, I still think we did it the right way around for us. I struggled enough with the first hill that I’d not want twice or more the challenge on that first day. But now we’ve got used to the heat I think it’ll be fine. Particularly now we’ve gained an extra hour. 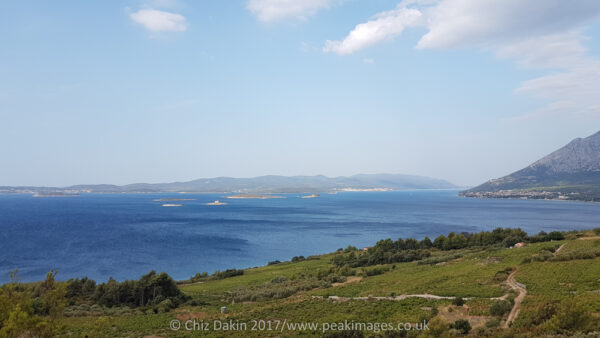 The early morning clouds are lifting, the view is great over the vineyards to Korcula.

The climb is moderate to start with, then steepens up. After the initial backroad from the ferry we’re now back on rather more well travelled roads. There’s also coaches to contend with now. Although that causes some amusement.

Just after we stop for a view part way up the hill out of Orebic, a coach pulls in from the other direction.

It’s full of South Koreans. Two of them instantly latch onto us, and want their photo taken with us. There’s a language barrier, but apparently it’s just because we’re cyclists! We think at first the guy wants a short test ride of my bike, but realise a bit later that he’s probably trying to say that he’s a cyclist too. They seem very impressed that we’re riding up the hill, and although they’re clearly friendly, it feels very very odd to be treated a bit like a celeb to be photo’d with! (Especially on an uphill!) 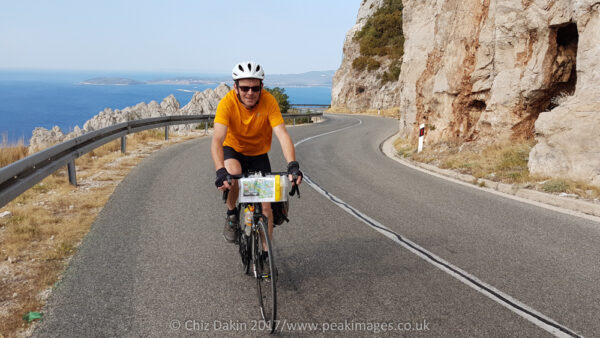 We soon continue uphill, the summit offers little more than a scrubby track end disappearing into the woodland as a layby.

The descent is good, but we’ve almost forgotten what traffic is on the islands – and once again have to get used to main roads – this time at full speed.

Once again though, virtually all drivers are very courteous. We see the American group again just as we turn off the main road in Potomje. Our turn to leave behind a cafe bar untouched, as we head through the tunnel ahead of them. Ah it turns out they were being rather ultra-cautious. They all had to wait for the SAG wagon to proceed through the tunnel ahead of them – a bit like a snowplough! But the tunnel was short and very very quiet. 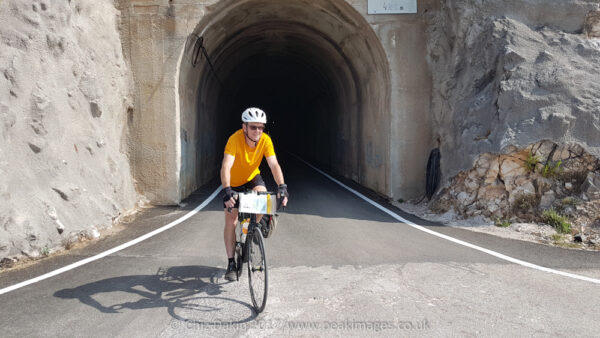 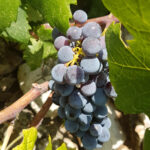 The Dingac tunnel is a winegrower’s tunnel. The climate on the coastal slopes is ideal for vines. Which are mostly red (Dingac and Plavac Mali – relatives of Californian Zinfandel – being a particular local favourite) on the Peljesac Peninsula, rather than the whites of Korcula and Hvar. The main road however, went on the inland side. So the Dingac vineyard had a tunnel cut through the rock for access to the better ground. Nowadays the back road on the far side of the tunnel is used by little other than the occasional wine grower. And several cyclists! 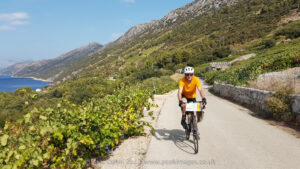 The Americans set off in front of us while I stop to get a photo of R, but once again we are more confident in descent than most and soon we’re in front.

The computer says we only managed 40kph at a couple of points on the road, but it feels faster than that! Although it’s steep enough that brakes are needed, and care needs to be taken on occasional bends/potholes.

But the views are great, despite a brief interruption through an area of an earlier bushfire, probably a couple of years ago – a stark reminder that the dry heat sometimes has dangerous results. Then it’s down hill once more – through more vineyard country all the way to the sea again at Trstenik. Where we stop for a well-earned drink. 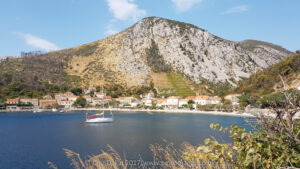 Looking back to the hill above Trstenik Bay

We follow the coast road to Zuljana where it would have been lovely to have stopped for a swim. But being over-cautious about the time we might take, I had eschewed the chance of swimming today, opting for reducing the weight of my rackbag by one snorkel, one pair of (heavy) sandals, one swimming cossie and one very lightweight sarong (as a towel) instead.

I really hadn’t thought we’d have the time for swimming en route, but we’re way ahead of ourselves already. Either the early start brought us fair winds (but we’ve got quite a stiff head wind, so can’t be that), cooler weather (a little) or we’re just getting well acclimatised to the heat now and making reasonable progress. 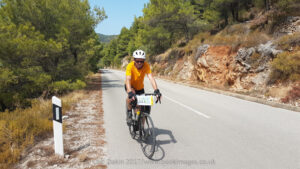 Quiet road to Dubrava with a gentle climb 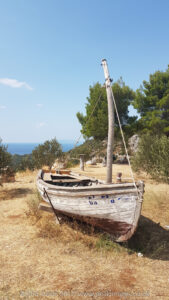 We now have a final steepish rise up to Dubrava, where we join the main road undulating along the centre of the peninsula, but the hill is tame by previous standards and the vineyards and olive groves come right to the roadside.

We stop at the summit layby. Complete with boat. Just as you’d expect!

Joining the main road, things feels a little less cycle friendly now. It begins to make sense why tour operators stop at Ston. I’d read from numerous sources that the coastal road from Ston to Dubrovnik is almost motorway like in its cycle unfriendliness and Ston was a good place to end the trip. But we’re on a downward slope again and it’s fast into Ston. A final hill just has to be enjoyed! 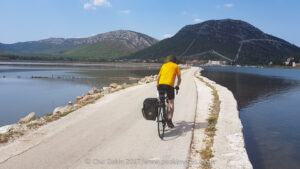 We explore briefly along the backroad by the salt pans on the edge of town but it doesn’t go anywhere so we turn around. There’s now a view, albeit in shadow, of the fortified walls of Ston – built to protect the salt pans in the times of Ragusan Republic. Apparently these rank second only to the Great Wall of China, as the longest fortified wall in the world.

We briefly wander through the town of Ston, but it’s actually surprisingly small. And having stopped, it becomes very hot and sultry in the still air of the town. We give in, it’s the end of the cycle tour, and we’ve earned a large beer! It’s the best thing to do while we wait for our transfer to Dubrovnik.

After a bit of liquid refreshment, I get chatting to the waitress. I’m curious as to why the town appears to be more than half abandoned. It seems the Croatian war of Independence (in 1991) reached this far and had an emigratory effect on the town as the bullets started to fly. And just as they were recovering from that, a major (6.0) earthquake struck in 1996, which structurally damaged 90% of the buildings/accommodation and the town was a prohibited area until repairs were made. It still looks as if it’s only just beginning to recover from this although our waitress says that folks are now moving back and things are improving.

We now meet Andrei, who will be returning our bikes to Meridien10 in Split and is providing the transfer to Dubrovnik.

Note for those looking for organise a Split-Dubrovnik tour on their own:

Although there are backroads that lead to the small village of Doli on the A8 as a way of extending the cycling a little further, it’s not a well-known destination like Ston and beyond this becomes extremely hard to avoid the main coastal road (A8). Which is indeed like a busy A road in the UK, with very fast cars and few bicycles, and gets increasingly busy as you near Dubrovnik.

Ston was a good place to end the trip, as most of the tours (self-guided and guided) in the region choose to end there! Clearly a transfer of some sort is needed beyond here, which isn’t easy to figure out on your own, as Ston itself is not on the main road. And also it’s very rare that buses have bike carriers in Croatia (Island Brac being a notable exception). To organise transfers yourself, my first suggestion would be to ask one of the many self-guided cycle touring companies in the region (like Meridien 10 for example) if they can provide this service – or if not can they recommend a local van/minibus shuttle service?