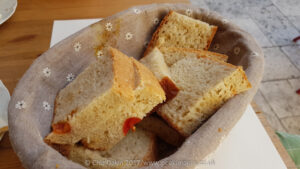 Tomato bread, an unexpected offering for breakfast – along with coffee of course!

Having encountered some unusual but not unpleasant tomato bread for breakfast, we discover that the Croatians have a healthy passion for coffee in the morning. It’s the first order of the day when meeting Ante from Meridien 10, who had come to deliver our bikes and talk through the route ahead.

And it’s strong stuff too – I was buzzing with excess caffeine by the time Ante had finished his enthusiastic and highly knowledgeable talk on all the places we should eat at (mostly) and visit, on each of the days of our upcoming ride. I suspect that even caffeine fueled, we would never be able to fit all his suggestions into three trips, let alone one, but it was great to see his obvious passion for the region.

We fit pedals and my seat to the bikes, and then its a quick spin around the square to test out fit. The bikes are rather sturdier than your average road racing machine, but given that they will be travelling on ferries, other smaller boats, and heading to the beach as well as more typical touring rides, then that makes sense. The bikes also come with solid racks and rear bags – well, you need something to fit the swimming gear and spare water in!

The triple chain ring at the front is also rather more real world than most road bikes giving a range of 50-30 at the front rather than 50/34. Eek – that means I have to remember how to use a front deraileur… (I’ve got rather used to the 1x system up front on my own bike). Just as importantly, the brakes appear to work well enough. They even have the nicety of a mid-bar auxiliary brake lever, which I grow to really love through the trip. 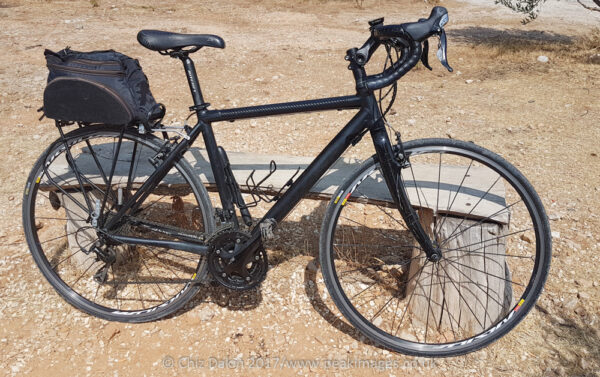 It does, however, take a bit of getting used to the brakes being reversed (to do with riding on the right hand side of the road), but I just keep telling myself “right then left” and practicing the motions. It comes easily after a while, especially once we get onto the road. Although I can’t help but feel the chain also ought to be reversed as I pick the bike up to descend the few steps out of the square and gain my first “cyclists tattoo” of chain ring marks! Overall though, I’m just excited – it’s time to test the bikes out on the local hill.

Marjan Hill starts about 1km from Split’s promenade along the stub eastern end of the coastal road out of Split. A steep rocky headland, 178m high with great views over the surrounding coastline and city, it was envisaged as a park for Diocletian’s subjects in the 4th Century AD. 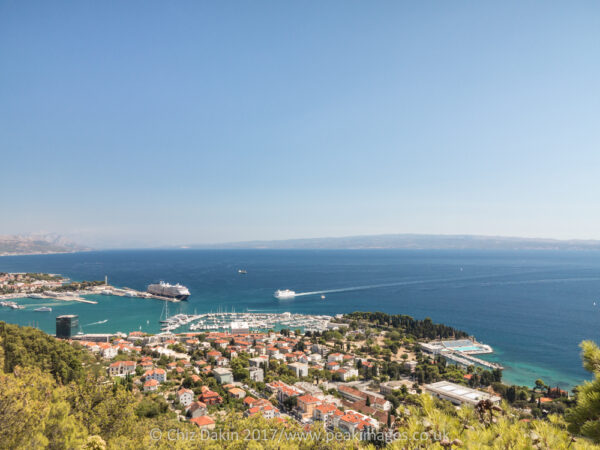 View from the summit of Marjan Hill, Split

It fell out of favour as a recreational area some time after his demise, but survived as a wilderness area on the edge of the city due to it’s vertiginuous and craggy limestone slopes, which made building almost anywhere else the easier choice. Particularly after laws were passed forbidding the felling of trees on its slopes in the 14th Century. 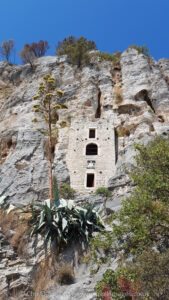 One of the hermitage caves, Marjan Hill

In the last 150 or so years, belvederes and leisure trails/attractions have developed to cater for the growing demand for leisure space. Of these the most enduring are the car-free trails around the base and to the summit plus the natural swimming spots, and the hill is now regarded by many as the symbol of Split.

We start on the Riva waterfront, taking the coastal road heading westwards and passing a small harbour. The road leads inland briefly, then back above the coastline and the popular Kazjuni beach. Vehicle traffic mostly ceases at a fork in the road with barriers across both ways. The climbing now begins in earnest, with a sharp hairpin after 100m. It’s 2km to the summit with a few bends along the way. And it’s getting warm. Much warmer than the previous day. 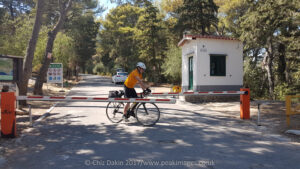 A perfect cycle sized gap between the barriers!

We’re grateful for several trees offering shade along the way, but the steps to one of the old cave-hermitages in the crags above are too much effort in this heat. We’re still really unacclimatised to that, so are glad today’s ride is just a short warm up one. Reaching the former telegraph station, now just a viewing platform on the summit, we have fabulous panoramic views over the city and harbour below.

But it’s one of the few areas on the hill with no shade, so we don’t stay long. We descend cautiously – it’s our first real test of the brakes and narrow (25mm-ish) tyres, but confidence grows as we descend and soon arrive at the vehicle barrier. It looks to block the whole road, until you are close when you can see it has a perfect bicycle sized gap between the two halves!

We stop in the shade by a T-junction – which way was that cafe bar with the great views? (Prva Vidilica). Ah, it’s just to the right, easy once we look at the trip notes from Ante!

The view is indeed great, but my choice of freshly squeezed “lemonade” turns out to be a local speciality. I had wondered why the waitress asked if that was what I really wanted when I ordered it… It turns out that it is freshly squeezed lemon juice diluted in water – not lemonade at all. It’s cool though and refreshing – if rather bitter. Perhaps a taste that I’m unlikely to acquire though, lesson learned! 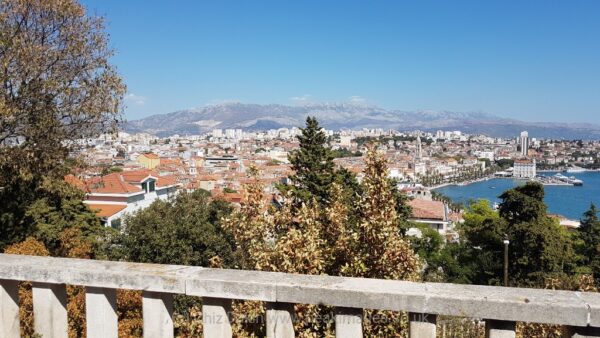 We wander briefly through some back streets, then back onto a cycle trail – one of the belevederes around the base of Marjan Hill. A turn off near the headland leads to Bene Beach – known mostly by locals, this is a lovely shady spot with a rocky entrance to the sea. We knew that Croatia has pebble or rocky beaches not sandy ones – but this at least means there’s no sand to irritate cycling shorts afterwards! Though sea urchins can be an occasional nuisance, which means it’s best to wear sandals or equivalent soles in the water. After a swim, we both enjoy the first of many of Croatia’s refreshing ice creams, before heading back to town.