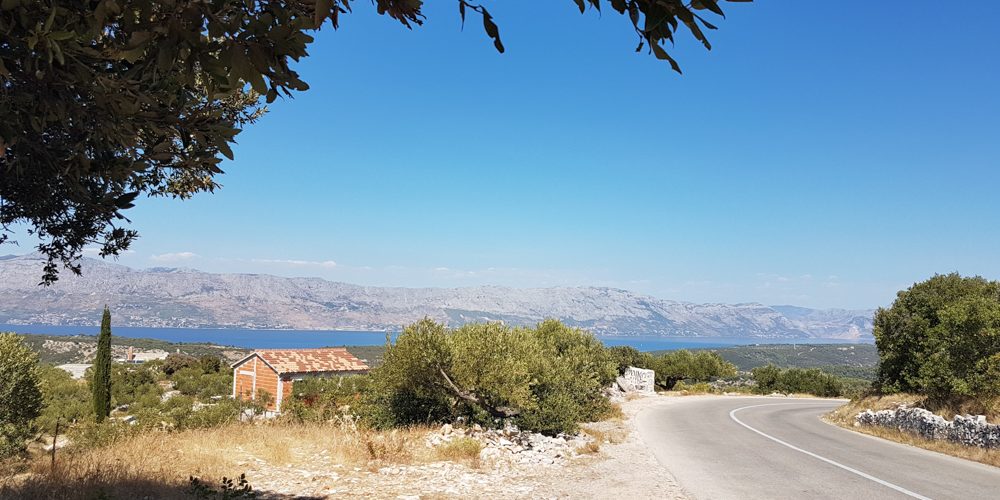 It’s an early start today, with luggage collected at 7:30am, as in this direction the ferries/boat transfers come first thing in the morning but leave us all day to get to our accommodation. But with the heat we need to make as much as we can of the earlier part of the day, so early ferries however painful when on holiday are a good move!

Split’s waterfront is long – the Riva promenade is towards the left of the image, the ferry terminal off the right hand end.

Unfortunately this also means breakfast cafes aren’t yet serving, but that’s not a problem when chocolate croissants are a staple of Croatian bakeries which are open. And freshly squeezed orange juice readily available on the Riva promenade. We enjoy both of these on the promenade, before discovering that the waterfront is much longer than we thought – especially beyond the promenade into the ferry port. Fortunately the signs for which ferry we need are good. Although we set off in plenty of time, we only just make it on board in time. And we really don’t want to wait an hour for the 10am ferry.

As I reach the top of the steps into the passenger area I’m handed a leaflet – clearly the local bus company (Autotrans.hr) would like me not to make it all the way to Bol by cycle today! Which makes me all the more determined I’m going to win against the forthcoming hill. (That said, it’s good to see the infrastructure exists to let you take your bike on the back of a bus if things work out too tough to get all the way – which can be very liberating for those unsure of their abilities). 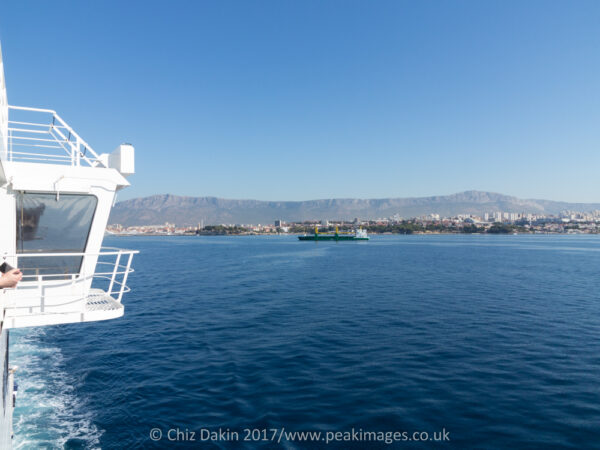 View from the ferry as it leaves Split for Supetar (Brac)

We take a brief detour to look around the pretty waterfront at Supetar – as much as anything to let the ferry traffic get out of the way. It’s a 46km ride today – gentle by home standards, but with 800m ascent more than double the previous day’s length and ascent.

Like much of the Dalmatian region, Brac was subject to several empires over the ages, although it missed the direct Greek colonisation in the 4th Century BC instead the Illyric tribes who settled in the Bronze and Iron Ages traded with the Greeks. Romans arrived about 2000 years ago, and Venetians and Habsburgs in the Middle Ages. Brac also became a place where refugees from the Ottoman Empire’s 15th/16th Century advances settled – the Ottoman empire never reached the island itself. 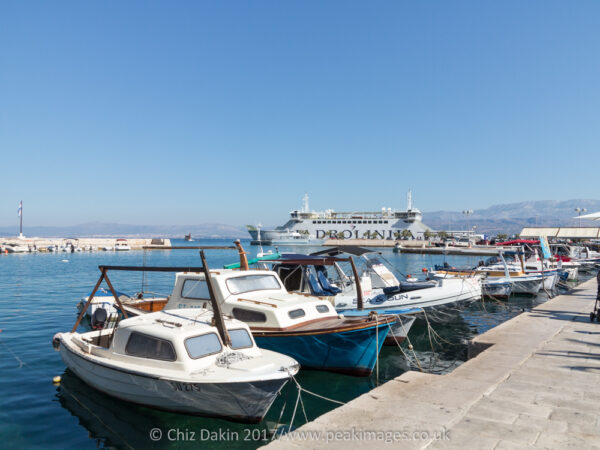 Perhaps they were after the high quality limestone – which has been used in the Diocletian palace, the White House in Washington and United Nations building in New York. Which is the essence of the hills ranging across the island. Even the supposedly “flat” start along the north coast to Splitska, Postira and Pucisca villages feels rather undulating. But the sky is blue, the water crystal clear, it’s currently warm rather than hot.

Away from the port and onto our first rural road, the traffic feels surprisingly fast (although vehicles are probably only going at 40mph or so whereas at home 50-60mph would be more likely), and a little unnerving. However, we don’t have to go far to realise that traffic is generally being far more courteous than in the UK, leaving plenty of space around us as they overtake. It does feel as if they understand the concept implicitly of leaving a gap of about a car’s width when overtaking a bike in a way that too many UK drivers don’t.

Most of our anxieties are really just unfamiliarity – a bit chaotic leaving the ferry, not being used to riding on the right, on skinny tyres and it’s the first island road so far. And we’re the only cyclists on the roads so far on Brac! 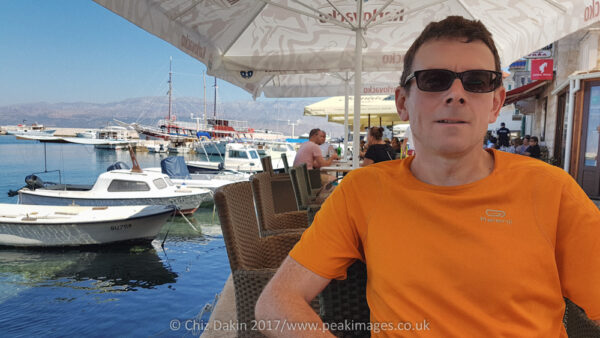 Konoba Vrsa on the Postira waterfront

We detour down some narrow streets to stop for a quick drink at a small harbour village of Postira, then decide to investigate a possible route I’ve seen on Open Street Map (via Viewranger, which I’m using to track our progress on my phone). This would stay off the main road and head through some shady woodland. 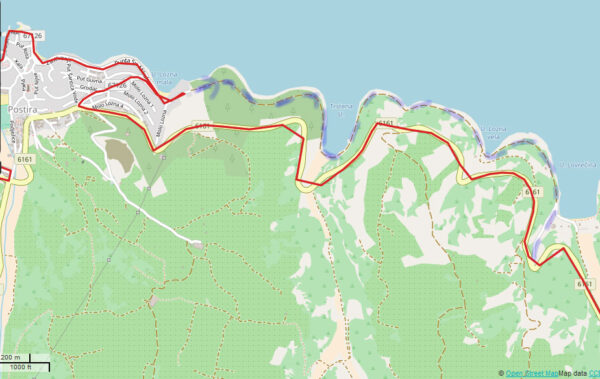 An alternative tarmac off-main-road option? (marked in blue – our track in red)

It looks promising at the start with a lovely tiny backroad, but we soon discover that the red dashes on the map really are gravel tracks. With skinny tyres, it doesn’t make sense to investigate too far and we reluctantly turn around. Meridien 10 hadn’t missed a trick by not suggesting this option for road bikes. It was the one time on the trip I really missed my gravel bike – which would have been perfect for it. (Next time I will win the family argument about bikes coming with us on the plane!) Instead we climb back up to the road, which now seems rather quieter.

By the time we reach Pucisca the sun is high in the sky, and it’s getting rather warm. Actually, hot. Nearly 30C. And that’s a little worrying for the hill ahead – a 400m barrier in the way between our arrival at Supetar and our accommodation on the far side of the island at Bol. Only one thing for it – time to find another bar to rehydrate before the climb. There is also where we see the first other cyclists on our tour – a group of German MTBers. 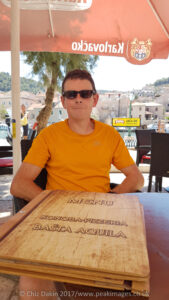 It’s the only day I really need a midday meal (spaghetti bolognese seems a good carb-loading choice!) but our “wise decision” to take a break “over the hottest bit of the day” didn’t work out. Looking back, I’m clearly dehydrated and un-acclimatised to the heat on this day during the climb, and we hadn’t realised that the temperature keeps rising through the day too, rather than being hottest between 12 and 2pm!It’s 7km from the edge of Pucisca to the summit with no refreshment stops en route. We’ve been warned to take plenty of water, so as well as loading up our water bottles at the Konoba Aquila we both discover the tap in the toilets is faulty… it seems to spray water all over our T-shirts 🙂 We hope this is enough to keep us cool on the start of the climb, but in the hot dry air, water neither stays cool nor provides a long-lasting cooling effect from evaporation. 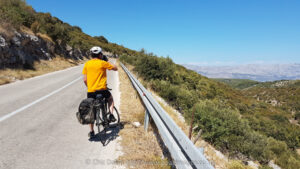 A welcome drink stop part way up the hill to Praznica

There are road markers counting off every km, but I’m now glancing far too frequently at the hire bike’s cycle computer. And cursing every excess gram in my pannier – snorkel and swimming kit for starters!

Every 100m along and every 10m ascent is a cause for minor celebration. I’m using my lowest gear right from the start, pedalling slowly but steadily, although we rapidly discover that the 30 gears have more quantity than range, and low isn’t that low a gear. To be honest I could do with another couple of gears at least on this hill, but I find this far less of an issue on later days.

I only make a couple of stops – for quick photos and to change over water bottles half way up the hill. But it’s definitely mind over matter and sheer stubborn-ness that gets me to the top of the hill. This turned out to be the toughest hill of the trip, despite not being the longest or highest day – lack of heat acclimatisation was taking its toll. 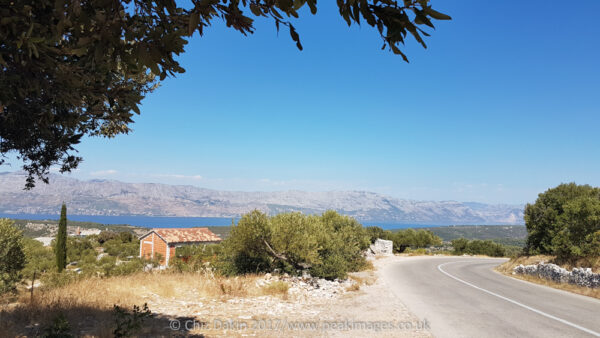 Much needed shade – nearly at the top of the Praznica hill

But now we’re on the plateau. There is an option to take a detour to Vidova Gora, the highest point of the island (at 780m, it’s one of the highest points on any of the Croatian islands). I’d have liked to do this on a cooler day, but it’s an extra 40km and that last 7km was tough. And any extra ascent isn’t really what either of us need right now. Fortunately the main route takes a fairly level 7km across the limestone karst plateau.

Near the Vidova Gora turn, R is puzzled an unexpected location of a new plantation high up on the hills beside the plateau. It takes just a few seconds to realise that it’s not a new pine plantation – it’s a young vineyard! Our first sign of local wine-growing, for which the islands and mainland Peljesac peninsula are renowned for. (Well, at least within Croatia, it’s an oddity that I’ve not found a good reason for, but unlike many wine growing regions, they rarely export their wine). 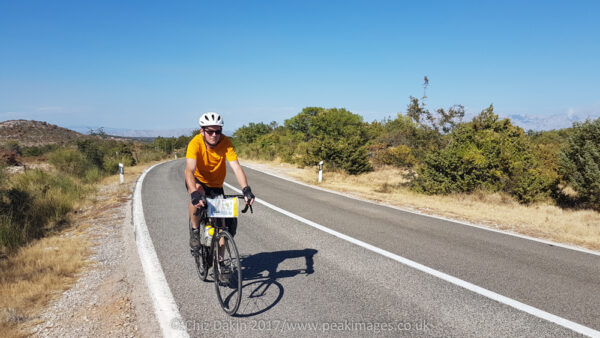 Near the end of the interior plateau

The plateau has olive trees in places, but seems to be quite a lot of scrubland. The locals have a never-ending battle removing limestone rocks to clear space to grow crops on the island, and here perhaps the stones have mostly won. A slight breeze across the plateau is surprisingly refreshing too, and I cool down more quickly than I’d have expected. But the quick drink stop at Nono Ban restaurant in Gornji Humac is much appreciated.

And then the fun begins. What goes up must come down, and a 7km descent is our reward for the climb. As with the ascent, its very well engineered, so it feels never-ending. But in this direction its amazing fun! We’re both still being fairly cautious with our brakes, but we begin to relax during this descent as we get a better appreciation of how the bikes handle. I make one stop to regroup with R, but picking the shade was a bad move for photography – and the hill was just too much fun to stop again!

Our accommodation that night is at Villa Daniela in Bol. Although it has a pool, the beach is a far greater draw when the water’s this clean and clear! And we had missed all the early chances for a dip before crossing the interior of the island. Zlatni Rat is supposedly one of the most famous of Croatian beaches – a natural triangle of pebbles formed by eddying currents. The 2km walk along the waterfront trail seemed a long way and was very busy. It was surprisingly windy when we got there, but it was obligatory to take a dip. The waves on the windy (but sunny) side were quite strong – like south coast beach-thumpers I’ve encountered at home. Unlike home, the water was a stunning azure blue – and after the first shock, really very refreshing. Definitely not cold but pleasantly cooling. 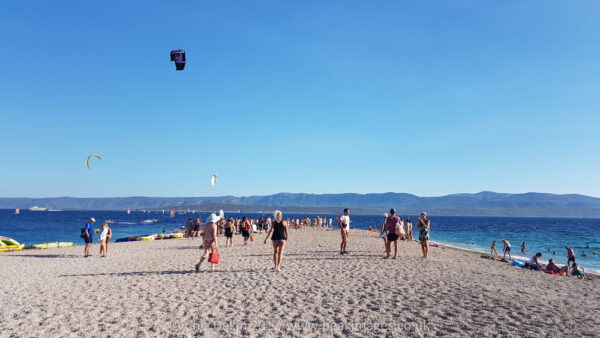 Zlatni Rat – that’s not sand you can see, but fine white pebbles.

We were again falling foul of Ante’s “do everything”. There wasn’t enough time. But it felt so relaxing on the beach that I wish we’d booked a day longer on the island. From now on we’ll have two nights in each place though, which will feel a lot less rushed.

We should also have gone via the “kuca u kuci” (a house within a house) the next morning on the way to the boat. Passing by in the dark on the way to dinner on the waterfront (tuna steaks at Topolino), it simply wasn’t possible to see much. But as legend goes, three rich seafaring brothers wanted to build on the land they owned surrounding a small property, but the smaller properties owner (“Vigourous Marco”) refused to sell his patch of land in the middle. Tensions grew, threats were made, Marco had to go into hiding, the sea-captain brothers were lost at sea fetching building supplies. Neither family left descendents, so the house within a partly built house remains locked off as a monument to building folly between neighbours.