It’s a much more relaxing day today – we can linger over breakfast without having to have luggage packed up and ready to move, and we don’t need to be anywhere before 9:45am. Luxury! Even though the beach for sea kayaking is the other end of town, we have plenty of time, and now we’re used to the early starts – although coffee still helps!

Arriving early at Krizna Luka bay we stop at cafe Conte – a lovely shaded bar with seats overlooking the bay. Having had coffee for breakfast, orange juice seems a good idea as we watch kayaks being unloaded before strolling down to meet the group. 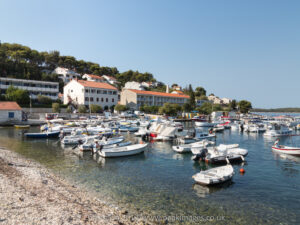 It’s a nautical maze launching a sea kayak off the Krizna Luka Beach!

Marco is our guide for the day and it’s the usual fare of how to get in the boat, how to hold the paddle etc etc at the start. Then we have an interesting game of thread the kayak through the moored boats. Of which there more than pebbles on the beach. OK, I exaggerate there, but there are a lot. Marco explains the local rules for this coastal maze – it seems it’s fair game to push against the boats with your hands, or nudge them (gently!) with the kayak, but don’t push off them with your paddle – that’s definitely frowned on. And we should head out to the concrete block on the far side of the bay – that keeps us away from the gas station which causes a busy shipping lane early in the morning.

Heading out past the SE arm of Marinkovac island

It’s easy going out to the islands, particularly with a sneaky gentle offshore wind blowing – which helps push us along but also makes the water seem deceptively calm. There is quite a mix of folks on the trip, from those that have never been in a kayak before to those who look  reasonable comfortable with them. It takes those newer to kayaking a bit of time to get used to paddling and balancing the boat, but they don’t fall in and after 30mins or so are keeping up with everyone as if they’ve done it all week!

R is as usual keen to explore every nook and cranny of the coastline – and finds plenty of entertainment, although he comments it’s not quite on the cragginess scale of ef Pembrokeshire. Meanwhile I’m enjoying being able to catch up with ease. It’s so rewarding mixing it up between the peace and tranquility of floating on the unbelievably clear water in the warm sunshine (being morning, the heat of the day has yet to really crank up) then putting in a short burst of effort to not fall off the back of the group who are being fairly sedate but constant in their paddling efforts.

Threading around the Pakleni islands by sea kayak

It’s a lovely relaxing half day – we thread in and out of a few islands (Jerolim, Marinkovac and an unnamed islet) before lunch by the beach at Mlini. A filling spaghetti is provided at Tri Grede cafe on the beach, it’s so filling that the best thing to do is to wander across to the other Mlini beach, just 100m along a gravel track that feels so Australian outback in character I’m half looking for snakes crossing the track! And then relax by the sea under the pine trees. The gravel beach perhaps isn’t the most comfortable I’ve found, but is remarkably peaceful, despite the other tourists. And once lunch has been digested for a bit then it’s time for a snorkel, then return to the kayaks.

Of course, that offshore wind has gathered strength a little with the early afternoon heat – and it’s tougher going on the way back. Perfect then to work off that lunchtime meal!