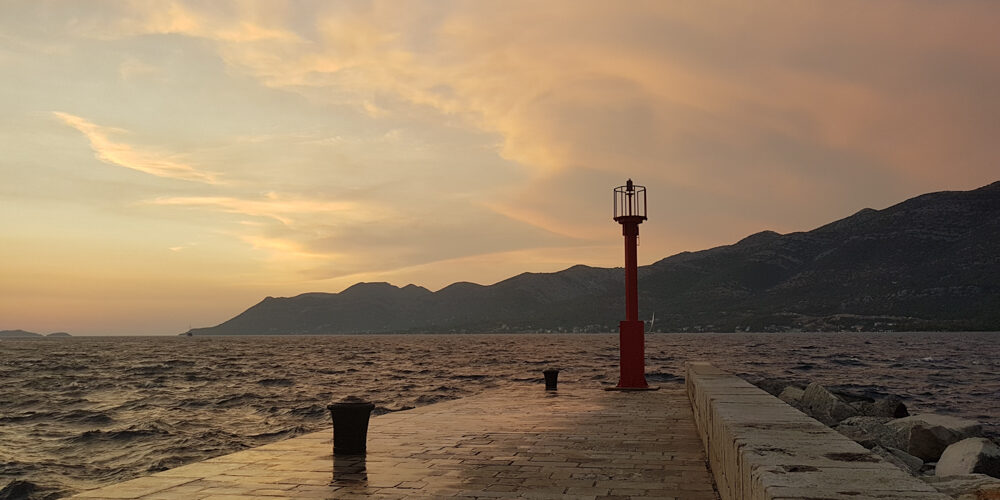 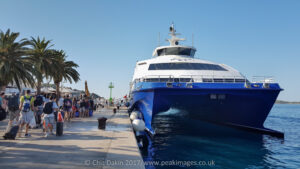 The large Jadrolinja catamaran passenger ferry to Split at Hvar Town docks was rather getting in the way of our boat being able to dock!

A familiar pattern is now emerging – and one that’s worked well on previous trips. That of a harder day followed by an easier day. Sea kayaking was pretty easy yesterday, so it must be a hard day today.

First though we had to wait for the rather large Jadrolinja catamaran ferry, which was in the way at the Hvar Town docks. Harbour space seemed to be at a real premium this morning – with two large ferries due and various other local craft arriving and departing. But eventually a space became available and a likely looking boat arrived. 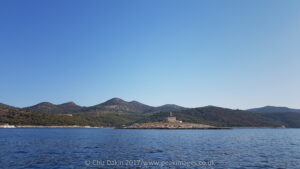 It was Frano with a long narrow speedboat, ready to take us, bikes and luggage to Vela Luka on Korcula Island. Once out of the harbour chop, the water is once again flat as a mill-pond. Surprisingly this doesn’t please Frano, but he explains his boat is built for carving through rough seas (it has a pointy front end to cut through the chop) and these conditions are boring! You can feel it too, in the way it easily slices through the one sharp wake we encounter. That would be useful on a rough day. It takes over an hour between the islands, even in Frano’s adventure chasing boat travelling at roughly 25knots. 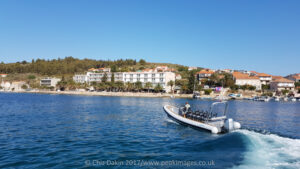 He thinks we’re mad cycling in this heat, although he was impressed we were going to Dubrovnik (three hours away by sea – even in his fast boat). I can see his point – it is a lot cooler on the sea with the self-generated breeze of our motion – although that’s also true of cycling! He does admit it isn’t as bad as a few weeks ago when it nearly reached 40C. At those temperatures, not only do bush fires become a serious potential problem but he says it’s been too hot for the vines and olive trees this year, and many harvests are failing.

As we reach Vela Luka, there’s confusion about where we want to be dropped. As “the gas station is the usual place” we head for there, and miraculously, once again a man appears as if by magic, ready to whisk away our luggage to our hotel for the night.

By now it’s 11am, and the day is already heating up. Vela Luka is more of a functional town, rather than the pretty harbours we’ve become used to on Hvar, so we don’t stay long and soon we’re in Blato. This feels to be an authentic rural village which has yet to see tourism as it’s income, unlike the former fishing villages we’d encountered in Hvar. But there’s a cafe-bar (M Caffe) with good shade and icy cool drinks. 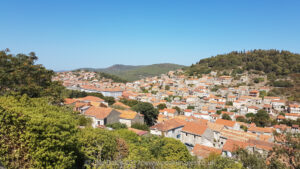 View from hill above Blato

We decide that we’re handling the heat well enough now that it’s worth trying the 10km extended loop, which takes in more of the south shore, before crossing over the central hills to Korcula Old Town. Of course, that also involves a 150m ascent over an additional ridge. Good thing this bar’s tap also develops a happy fault and manages to soak my T-shirt, hat and gloves with water. That lasts most of the way up the hill, before evaporation wins. The remaining ice cubes from our drinks last far less time – even with an insulated bottle.

The road bends sharply towards the top of the hill into more of the woodland for which Korcula is known. Then it’s another of the thoroughly enjoyable fast but moderate descents on the far side. I begin to look out for swimming spots, but sadly it’s all looking very private until we reach Brna – where the road starts to turn inland again. 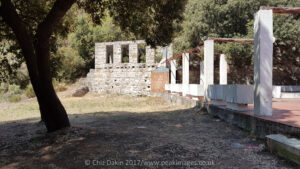 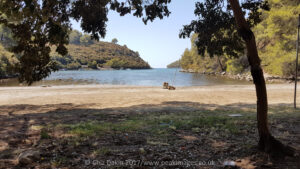 The only beach we’ve not been tempted to swim from. (Istuga Bay)

Here we find a little road that leads down into Istruga Bay. It’s clear that the cafe bar once here picked the wrong spot – the beach is the only muddy and uninviting one we see all trip, and the cafe long gone. It’s terrace provides a good wall though as we munch a small snack before the hill ahead.

We wander briefly through the pretty bay at Brna, I’ve given up on swimming by now as time is getting on, but could have found some lovely spots there. The village seems an unexpected mix of low-key tourism and residential village with agricultural produce for sale at almost every corner. But this is Korcula not Hvar, the feeling overall is much more low-key and relaxed.

The rise to Smokvica (one of the main wine producing villages of the region) is gentle enough. The village seems very sleepy and we struggle to locate the cafe bar which was just off our route as we entered the village. But it’s a good one, it even has driveway entertainment from some locals “not-entirely-successful” efforts with a broom to evict a kitten hiding from the midday heat under a car. The kitten is yowling with frustrated anguish as it doesn’t want to move. At all! But eventually it’s persuaded that the shade of another car nearby would be less troublesome for all and the driver can get on his way. The pizza is pretty good too – but a wish to stay upright on two wheels gets in the way of trying the wine. A shame, but with 40km still to go, that will have to wait til we reach our accommodation. 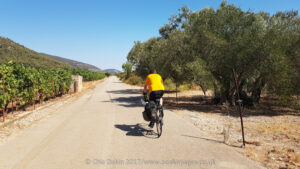 Back among the vineyards and olive groves after Cara 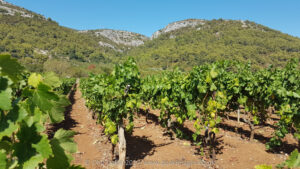 Vineyards on the central highlands near Cara

Then it dawns on us why it’s so quiet – it’s Sunday and they take that the old-fashioned way here, with Sunday afternoon closing outside the main tourist town. And we’ve missed the Sunday morning opening of the village supermarkets by more than an hour. Doh! We get our water bottles refilled at the bar (it’s a good move, the water is icy cold) but have to hope that our meagre emergency supplies will last the rest of the day.

From Smokvica, we rise gently through Cara on what feels like a rather main road, just very quiet. Shortly after Cara we turn off onto a really quiet backroad – and undulate gently through vineyards and olive groves again. All too soon, the road steepens for the big hill of the day with a series of hairpin bends gaining height quickly under imposing tree-lined limestone crags. We’re rising rapidly above the coastline towards Pupnaska Luka – allegedly the most inaccessible road-accessed beach on the island. If that isn’t some sort of contradiction in itself. 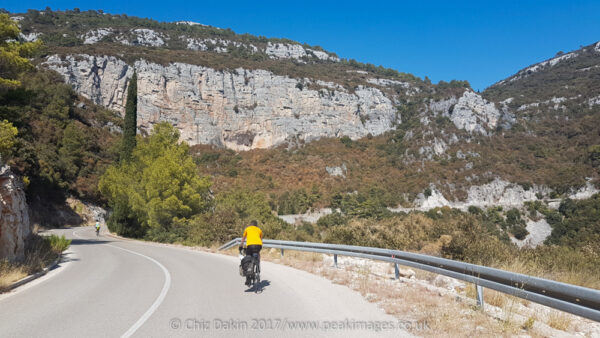 Hairpin bends leading up to Pupnat

Once again on the long ascent we meet part of a tour group. This time it seems to be an American group of road cyclists, some of who are going a little bit faster than their bodies seem happy with. We play leapfrog with those going at a similar-ish pace, then try and offer a bit of advice to try and ride slowly but steadily to one who has given up and is pushing the bike. There’s a surprisingly wide range of hill-climbing abilities within the group, perhaps wider than I’d have expected for an organised group. But although I’m being passed by several of the faster folks,  I’m happy with the climb today – I’m hot, but not overheating too badly and the gears feel reasonable. I guess acclimatisation to the heat does happen! 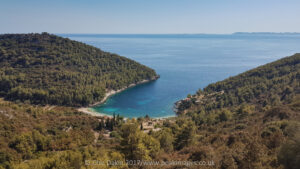 Pupnatska Luka from 250m above.

We reach a side road at a false summit. It had looked like the top from below, after the wide bend around a valley. But it’s the turn-off down to Pupnatska Luka. The American group take longer to decide it’s not worth the 250m descent and re-ascent than we do, but start to play leapfrog once again when we find the next shady spot for a quick drink! 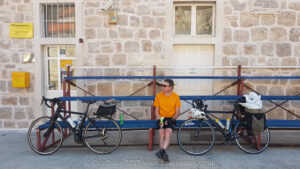 Pupnat post office square had a useful shady bench for a mid-afternoon snack. 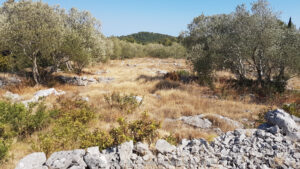 We find a shady spot on some benches by the post office, and enjoy the last of our snacks. I wander around the estivating village with camera. (Estivating? Well, it’s summer – not winter – but has all the feel of hibernation with barely a soul around. Clearly Sunday afternoon siesta time is taken seriously!)

Then it’s time for the last of our wonderful island descents.

I work out that the American group are continuing as they start to pass us during this time, but as we leave the village we’re surprised to see four turning back the way they’ve come. We shout at them, wondering if they are going the right way – but they can’t hear us. Perhaps they’re going a different way? No, as we descend and start to catch up the rest of their group it’s clear they are missing a few from the main group.

I mention to the backmarker that we think at least four have gone the wrong way and she says thanks. And to mention it to “the woman with the Croatian jersey” if we catch her up, as she’s the leader. I suspect the leader has a fair head start on me, but I’m enjoying the downhill and really surprised how much faster I am downhill than their group, compared to the advantage some of them had on me uphill. We’ve obviously become comfortable with the hire bikes as R isn’t a long way behind, and catch her up by a junction!

Later on, we meet her again at a junction, where she tells us of the “nicer way down” to Korcula Town via Zrnovo Banja – it’s steeper, but apparently much more pleasant than the main road. We take it, and discover there is a very fine view over the Peljesac Peninsula and Korcula Old Town. 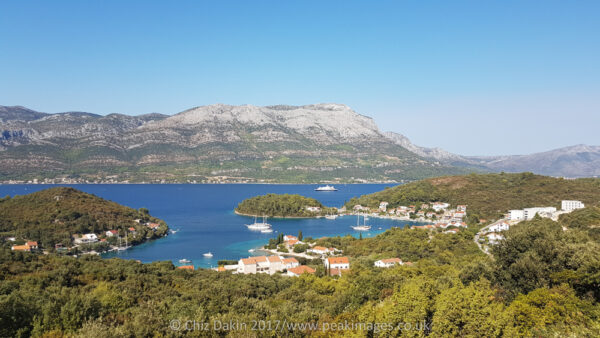 View from the steep descent to Zrnovo Banja

Judge for yourself, but I thought it was worth breaking the descent for – and it seems so did everyone who arrived in ones and twos behind me!

The final bit into Korcula Old Town was quite fiddly – with lots of turns, a one-way system and one awkward step with lots of chain ring marks at a road end that neither of us felt like testing our bunny hopping skills over. And the centre of Korcula offered some serious “pave”, with deep gaps between the stone flags! 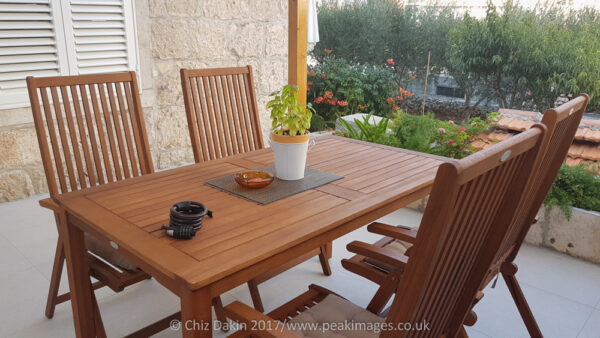 Our apartment was tucked away up a stepped pedestrian street at the back of the Old Town. Hidden behind a wall it had a lovely shady terrace area and all mod cons.

Of all the accommodation we had, this one was the best – it felt better value than a 3* hotel and far better suited to us than an overly posh (and expensive) 4* hotel. We could have affordable (ie shop bought) wine on the terrace after dinner and there was even a washing machine to refresh our cycling clothes in!

But first, there was the small matter of a dip in the sea (by the Old Walls) to have, and then the best sunset of the trip. 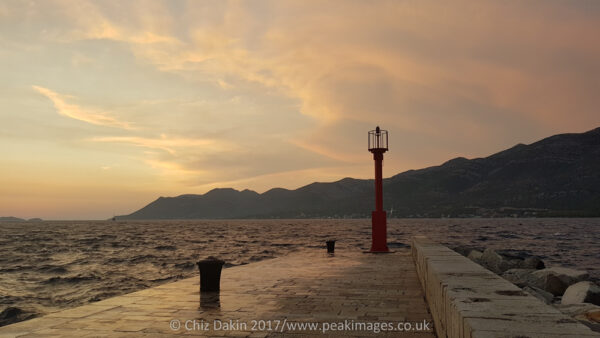