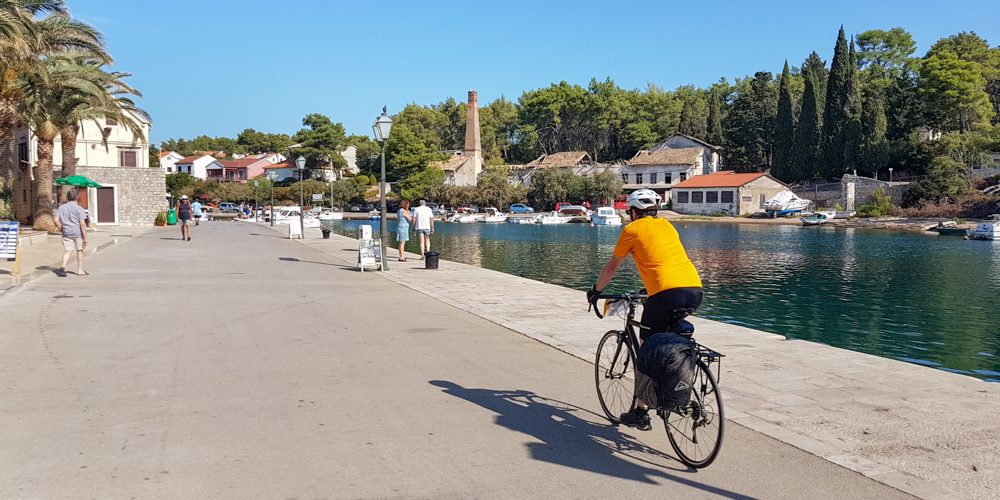 It’s already feeling a bit of a whirlwind tour – it’s early morning so it must be time to leave our luggage for collection, grab a quick breakfast, then a ferry! But we’re glad it’s a little less hectic than yesterday – we have a private speedboat booked for the short crossing from Bol to Jelsa on Hvar Island. We’re assured it will be going slow enough not to soak our luggage!

Sadly the winery on the harbour front isn’t open that early – I guess it would be a little early for wine! With a second day we’d have had chance to sample it’s fares. 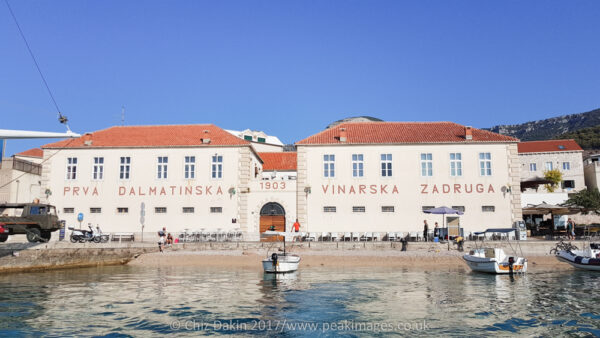 The “Stina” winery at Bol.

When the boat arrived, then came the puzzle of fitting bikes and bags in. Bikes in the middle, bags at front, us behind, easy! Skimming across the millpond flat surface of the Adriatic, we arrived all too soon at the pretty little harbour village of Jelsa. 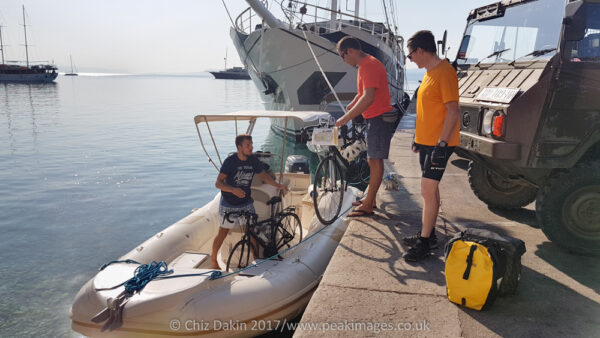 Our captain was unsure where to drop us, so dropped us at “the usual place”. Sure enough within a couple of minutes a couple of older guys came to help with the bags and bikes, and then they said it’s fine for us to go – our luggage will be sorted. With a degree of trust that came from the very safe feeling environment we’d encountered throughout Croatia so far, we left them to it! A brief wander around the old fishing village and our bags had gone by the time we passed by on the way out. (And yes, they arrived fine at our accommodation without any issues!)

Vrboska was the next village which formed a line of pretty housing and businesses surrounding a narrow coastal inlet with lots of moored boats. Once again, it felt a little too “harboury” to take a dip, and then we were out into the olive groves of the Stari Grad plain. 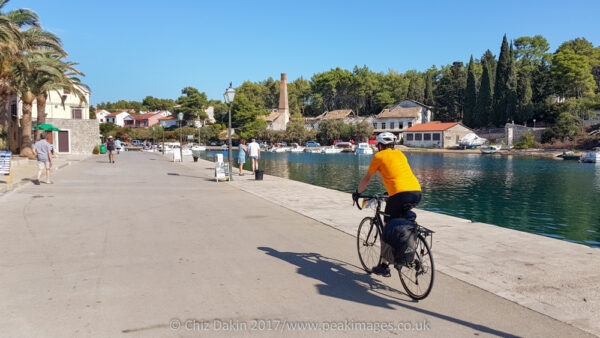 Heading through Vrboska – a pretty fishing village on a narrow inlet.

A gentle climb down lovely quiet and peaceful lanes, where the occasional tractor, lost tourist car, or farmer drives, but little else. Even the road signs seem to recognise cyclists and walkers as the main traffic! 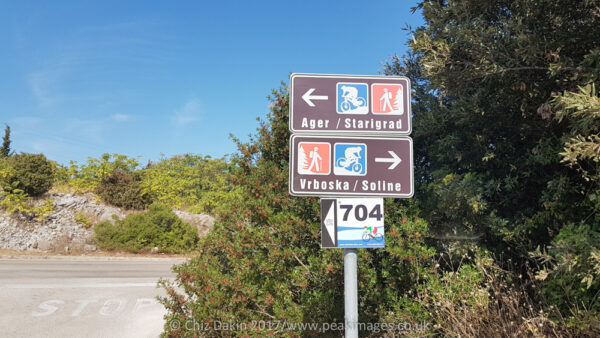 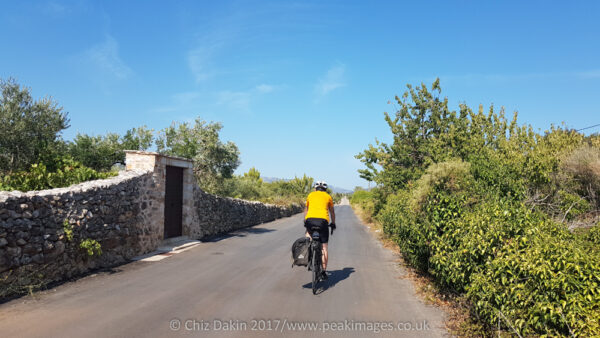 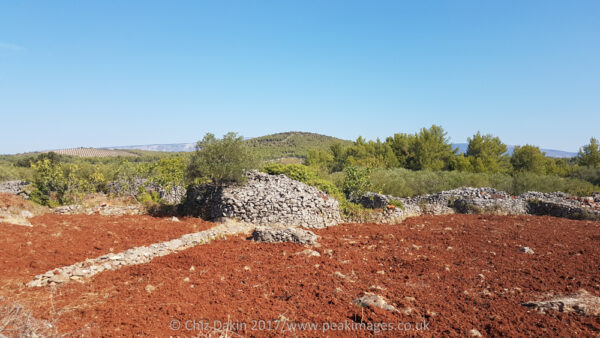 The going is easy today – I’m not sure if I’m adjusting to the heat, or if it really is easier, but the kilometers fly by and soon we’re on a gentle descent into Stari Grad. 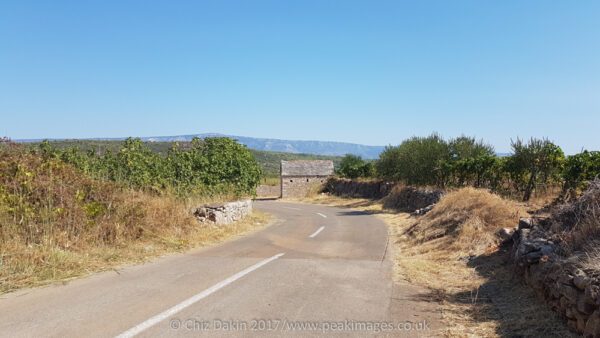 The quiet lanes of the Stari Grad Plain

Stari Grid is a local market town on a harbour – in fact the name means Old Town and it was founded by the Greeks in 4th Century BC. It’s well worth a wander around the backstreets, then enjoy an ice cream on the waterfront. It’s a race to eat it before it melts though! Then on the way out we pick up some chocolate croissants for later. 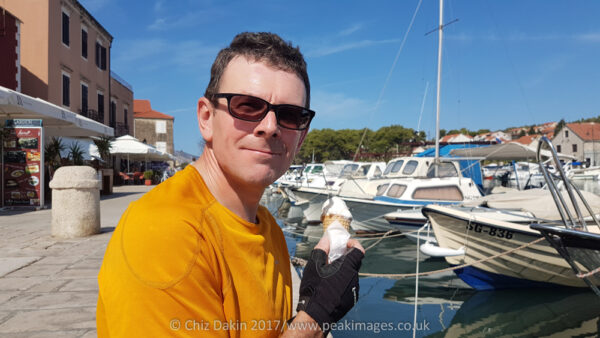 Suitably refreshed it’s time to tackle todays hill. Another 400+ meter climb, once again on very well engineered gradients. In fact, surprisingly well engineered given we’re now on backroads (the main road follows below the mountain road and through a tunnel) – back home such minor roads would probably take the steepest gradient possible (1 in 3 not at all uncommon) up the hill. 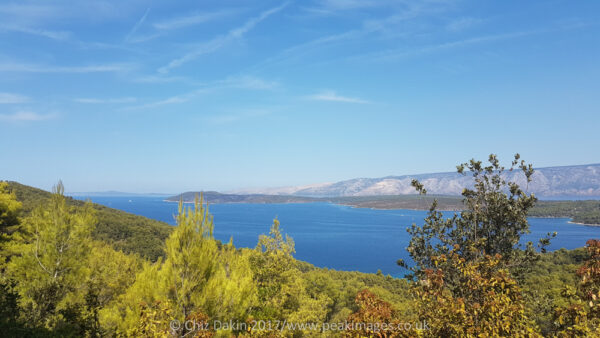 The mountain road from Stari Grad to Brusje (summit)

And today I’m feeling much better about the ascent. I’ve got a secret weapon too. None of this foam hat “magic bullet” wearing for me (even R gives up with that on the ascents in this heat). A mountaineering sunhat (tested to near gale force in the mountains, and secure without strangling chin-straps even at 30mph downhill) is the answer. The reason? It can be soaked with water all the way up the climb! I’ve now got a system going – one of my water bottles (the one with insulation) is for me, the other (which tasted foul on the first day) is for cooling my body. That way I make it relatively easily up the hill. 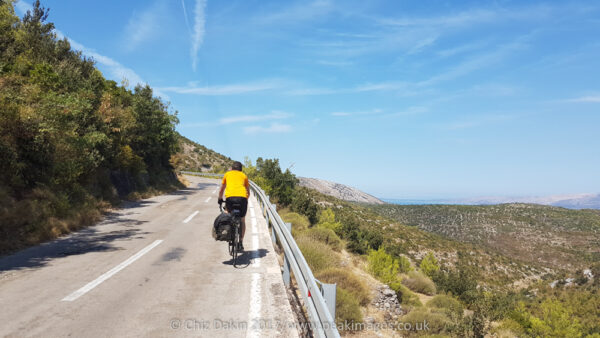 Some Germans – the same group as we passed the day before – come by in ones and twos. The first lad is very fit and strong and making easy going of the hill at speed. The ones immediately behind seem to be trying a little too hard to race. I play leapfrog with the group as we stop at different places on the hill for drink and view stops, but slot in with a small group of women who are taking things at a pace they look like they could keep going all day. R meanwhile is well ahead most of the time on the ascents – just as I am on the descents! 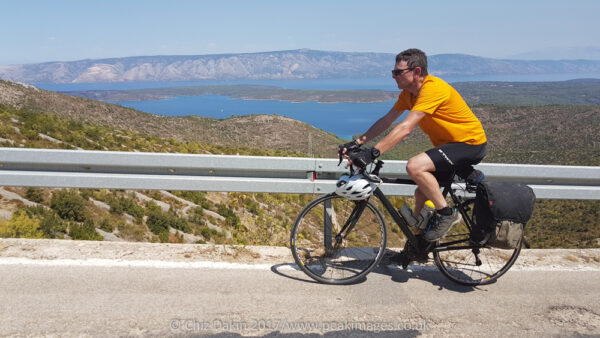 Too hot even for R to wear a foam lid! But the views are great

The fast lads make it to the top of the main ascent well before me – and nab the picnic table. I’m not bothered though, they seem to have missed the restaurant at the top with its shady tables and ice-cold bottles of Coke! The remaining ice cubes in our glass go in the water bottles and now we have cooler water for the final rise across the undulating plateau. 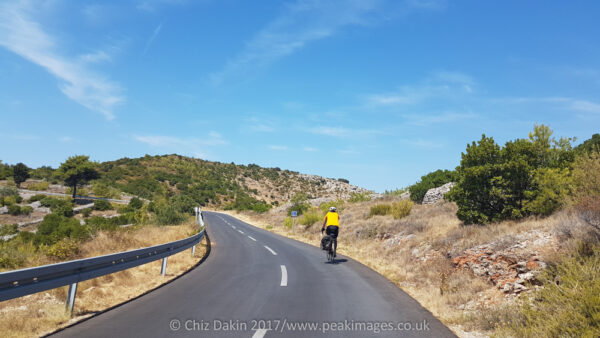 The summit of the mountain road from Stari Grad to Brusje is almost imperceptible – with a gently undulating plateau before the descent.

The plateau is cultivated at great cost – with limestone rocks piled into mounds everywhere to try and make useable growing space for crops. Sadly we don’t see any sign of the famous lavender this road (and the island as a whole) is known for though. But in late August the crop will long since have been harvested, you need to be here in early summer – well before mid July – for that. 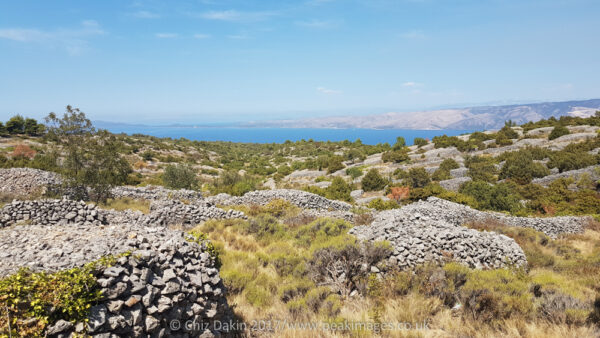 Then it’s another fantastic never-ending descent. Which starts off so gently we’re not sure exactly when we reached the true summit. We stop for croissants, just as it’s definitely beginning to properly descend, then enjoy the fabulous whizz down to the old town of Hvar – this time feeling much more confident in our bikes and braking abilities. 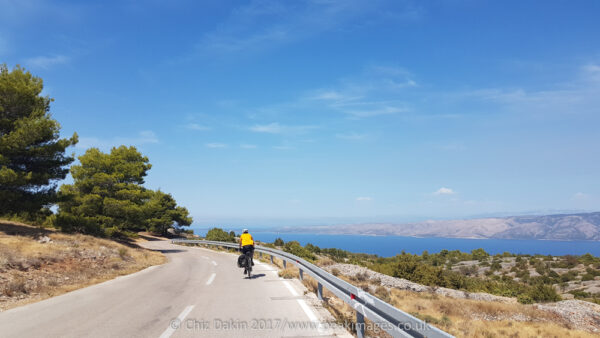 Start of the descent to Hvar Town. 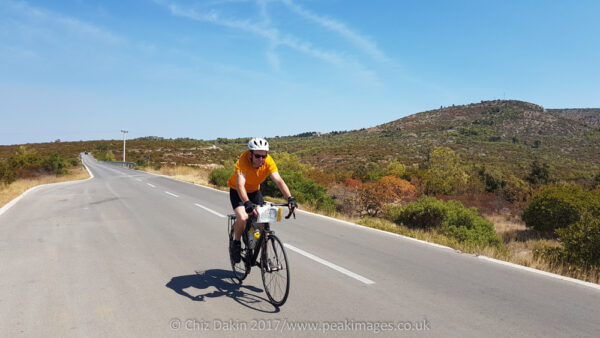 On the descent to Hvar Town.

Hvar Town is a fantastic place for history lovers – with all sorts of fascinating ancient buildings. However, if you’re there for the party – and many folks are in August – beware the town mayor. Who has (rightly so) become a tad irritated at drunken youths sleeping off their hangovers (and worse) in the Old Town. There’s now fines for wearing beachwear in town, sleeping in public, drinking in public places (but obviously not including the bars), or picnicking in the town centre. And the fines aren’t small, 500-700 Euros is the going rate. Obviously, we didn’t see things before, and we saw a few rules being flouted, but by and large the plan may well have worked. Although the party can be found if that’s what you want, it’s doesn’t currently seem to be over-running the Old Town at all. 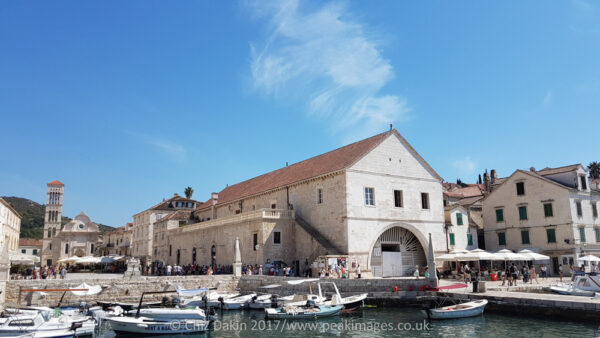 Hvar Town – the old Arsenal and Shipyard across the bay once fitted out Venetian war galleons, while a theatre (claimed to be the oldest in Europe) provided entertainment above!

Having stopped it felt overpoweringly hot without the self-generated breeze of cycling. And history wasn’t on the agenda in siesta time. Although we did manage to wander around some back streets before conceding the bar was the place to be!

Even the Radler Beer (a wonderful invention I’ve come across in Slovenia before – shandy but with real lemony lemonade – great for drinking in a hot early afternoon when the full strength stuff might send you to sleep!) was feeling distinctly soporific as we sat in the town square. 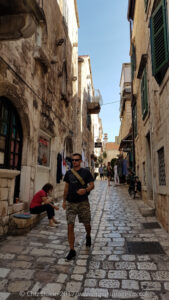 Back streets of Hvar Town 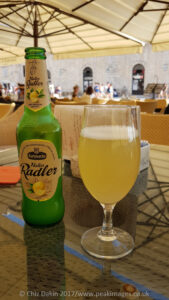 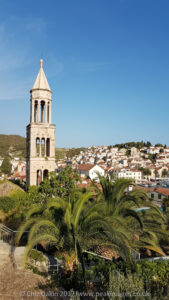 Back to our hotel on the hill, then off along some narrow contouring lanes above the town and up the zigzags to the Old Fort. From which it’s customary to watch the sunset. So customary, that it was rather hard to get photos due to the masses. We enjoyed a few minutes in the dusk, then set out for dinner.

To be honest we made a mistake with dinner. Good smells and lack of hassle from the doorkeeper at the busy central restaurant in the main square tempted us in. And then we went against our early learned “rule” that it really makes a lot of sense to drink beer with the meal but buy a bottle of wine from the local stores and enjoy on the terrace/veranda/balcony etc of your accommodation. (The average markup for wine in restaurants is about 5-10x that in the shops – or to put it another way, £40-£60 for an average bottle. Which compares very badly with the price of beer – well under £3 for a 500ml glass).

And then discovered – after the fact – that they don’t take credit cards. Which was an unpleasant surprise, especially having managed to miss the small print (very easily overlooked) in the menu that was the only warning. Had we known, we’d either have walked on (we should have, despite the smells that enticed us in the fileted sea bream wasn’t that wonderful either) or not had wine. We’d expected a lack of credit cards for the smaller bars off the main tourist trail, but not at a place like that and it left a sour taste.

But I guess an element of that is what you have to expect with a touristy place – we should have made more effort and gone further afield to eat.