UK to Croatia is a short flight – around about two hours, which puts it a shade nearer to home than southern Spain and barely further than Austria or Italy. It is after all just a short ferry crossing over the Adriatic Sea from Italy. There aren’t as many low-cost airlines serving it though – nor so many cheap deals. Having scoured the last-minute deals for flights meant we ended up flying from Luton airport, which wasn’t ideal. It’s a fair way from home, and the facelift currently in progress is very overdue. I can’t remember a more boring lounge to wait in than the downstairs, air-stifled, cattle pen without seats, that we were gradually herded into for a 45 min wait before the plane finally was ready for boarding. But hopefully the works will soon transform and modernise it.

Split airport is one with an “interesting” approach. Due to its position between the hinterland hills, coast and the curving around of the coastline (and it’s hills) between Trogir – where the airport is – and Split, planes have to fly in over the sea, then make a very sharp banking turn left to gain the single strip runway. While avoiding the hills that almost overlook the runway. It’s probably not one to do as a first flight if you’re a nervous air passenger, but reminds the rest of us how well planes can manoeuver when they wish to, rather than the very gentle, barely banking arcs they usually cruise round turns on. 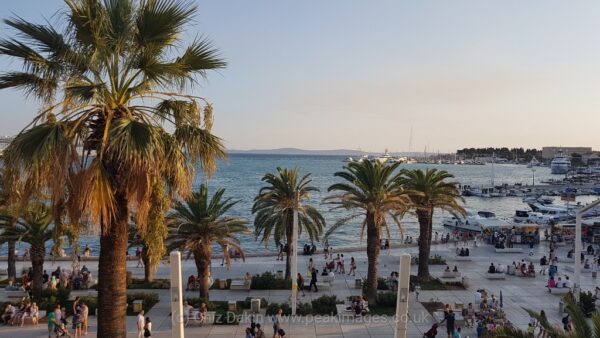 Not a bad view from the Riva apartments in Split

A quick transfer to Split soon has us walking to the apartment where we will spend the next two nights. Our apartment is a few blocks away from the road, but we don’t mind that. Especially when we discover that we’ve got a seafront view over the promenade! The apartment is lovely, clean and comfortable, with reasonably well sound-proofed windows against late night bar noise.

We arrive in the early evening, so set out quickly to explore the town. It feels cooler than expected, partly that’s down to being the coolest day we encounter in Croatia (25C), and partly the expectation that it will cool further as the evening arrives means I expect to get colder (it doesn’t cool until several hours past sunset). But it’s still warm enough to wear shorts out to dinner! 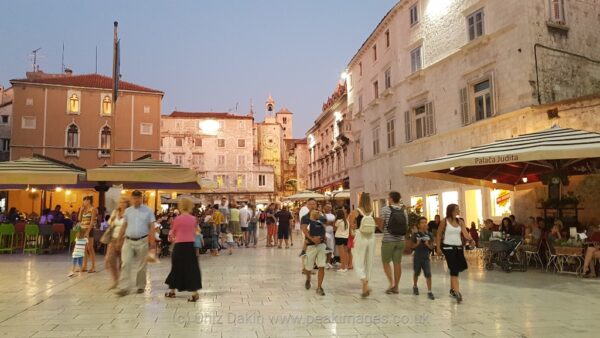 Inside the Diocletian Palace, Split

We wander along the promenade, then through the clearly ancient buildings at the back of the promenade (the Diocletian Palace). Far from being a fossilised relic from the past, this former Roman Emperor’s walled complex is a thriving district of Split where today about 3000 people live. Oh, and the occasional film crew use as a location. (It’s one of many places within Croatia where the Game of Thrones was filmed). It seems we walked near to Daenerys’ Throne room – the place where dragons are kept. (I’ve read the books, but must be one of the few folks on the planet not to have seen the TV series). 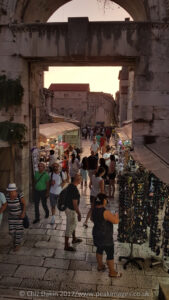 Back streets of the Diocletian Palace at dusk

This being our first cycling touring trip abroad (and needing to carry very limited weight over the hills in the heat) I was travelling extremely light photographically – most of the images are taken on my smartphone (Galaxy S7, which does a surprisingly good job) or occasionally an aging Canon G1x (frustratingly Fuji had my X-T2 back for warranty fixes yet again…). But there are limits to what both of these are capable of shooting, and I was definitely pushing them in the busy, dark, back streets of the Diocletian Palace.

Although Diocletian isn’t one of the more famous Roman Emperors taught about in UK schools, he achieved something very rare. Surviving long enough to retire from the job! The Diocletian Palace was built as his “retirement pad” in the 4th Century. Half of the walled city was his “palace”, half of it as accommodation and stores for his garrison. It’s perhaps not surprising that the stone flagged pavements are highly polished. It is a limestone area, and there’s been about 1700 years worth of people passing over it and polishing it with every step. Today it’s a mix of restaurants, bars, tourist shops and living space.

We haven’t yet adjusted to one of the down-sides of outdoors dining in a Mediterranean region – inside the Palace walls the smokers’ fumes seem to hang thickly. The promenade seemed better on that, even though the smell of the sea was, well, strong… It didn’t affect the busy trade the promenade restaurants were doing though, nor the mass of mostly walkers with a few runners and cyclists, enjoying some gentle evening exercise, and after a bit the nose does adjust. 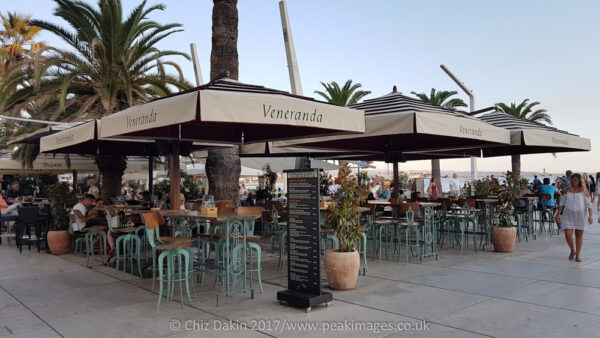 We end up in the last bar on the end, and almost as soon as we’ve sat down a crowd gather on the square to our right. A trio of street gymnasts have popped up with music and an impressive routine that involves a human pyramid, some amazing balancing (one younger, lighter member of the troupe upside down with their head cradled one-handed in the outstretched palm of a larger, stronger member of the group!) and some nifty footwork around a skipping rope.

Unfortunately the crowd quickly grew too large to see much, but the glimpses of the higher level acrobatics were very impressive! It seems they do this as a short routine, with a break to let the crowd disperse, then starting up again with a new set of tourists to hopefully impress enough to gain tips from. Sadly by the time I’d sussed this and could be at the front of the next crowd to form, some dull security-related jobsworths in suits turned up. Some paperwork appeared to be available for them to peer down their noses at, but all in vain, the trio were moved on. A shame as it was good entertainment. But it’s good to see the promenade and Palace are lively thriving areas, and Croatia feels remarkably safe from petty crime – a feeling that only grew throughout our trip.