This post only covers my trial pitch in the back garden (I’ll report on it’s use in the hills later), so I’m not making any serious comments about it’s use in the proper wilds (ie in strong winds or rain/snow on mountain-sides) but initial impressions are very good. 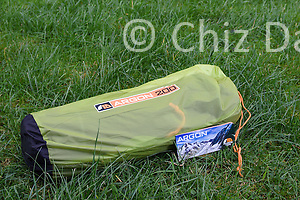 It’s packed dimensions are small – just 45cm long and far thinner than one of those old-style rolled up foam mats! But it’s the weight that’s a real surprise – just 1.8kg…  It really feels light, and I’m sure it’s lighter than my new sleeping bag (also from F10), which is a very odd sensation…  More on that in a bit…

The pegs are the smallest and lightest I’ve ever seen, and I would expect that they will need to be “rocked down” in practice. But pegs are carried weight in the rucksac, rocks for loading them with aren’t, so that’s probably a good saving – as long as there are good rocks around to weigh them down with where you pitch the tent and it’s not too bad weather… (According to the F10 website, they’re made of titanium – and only 2g or 5g each…) 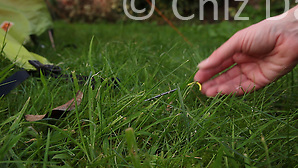 Another nice touch on the pegs is the coloured tips – which if you’re a clumsy butterfingers like me and prone to dropping one or several of them out their stuff bag onto the ground, makes it a lot easier to see where they’ve gone. Also useful when it comes to taking the tent down.

The interior of the tent is good and roomy for one – perfect for expedition/photography use. It would be a bit cramped for two, but if you’re travelling seriously ultralight it would be viable for short trips and better than some heavier alternatives. 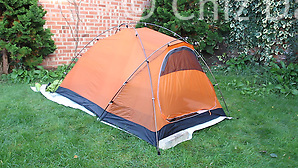 The axial-hub pole system seems rather unique to me, and makes a rock solid framework – which even stands up on it’s own without the tent! That gives me good confidence this is going to be a tent that will withstand some of the nastier weather a mountain can throw at it… 🙂 It also makes it surprisingly easy to pitch.

I’m not usually a fan of pitching inner first, but the inner looks to be sufficiently water resistant not to be an issue for the short time that pitching will take. (Five mins is the estimate on their website – after you’ve got past the first couple of “discovery and learning” pitches, which are slow for every new tent – I’d reckon that’s not at all far off…)

You might think that a reasonably water resistant inner would be bad for breathability… Well, I’m not going to lie here, I have seen more breathable inners… But they also weigh more, and are less good in hostile weather. I think F10 have the compromise right on the Argon 200 here – the inner isn’t the most breathable around, but equally there are far worse out there. And the mesh panel at front and rear (particularly with front panel and the excellent “hooded” opening on the front outer open) look like they’ll do a good enough job. UPDATE – in early use on the mountain, this does indeed seems to work well enough. 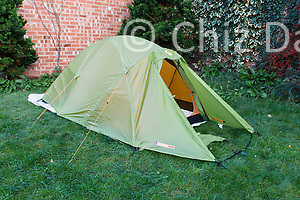 Final thoughts. I’ve previously had the Vango F10 Helium 200 (2009 model, not the latest superlight carbon one) and while it’s an amazingly light tent, the porch really doesn’t cut it for me. No room at all. Think of the Helium 200 as a posh bivvy bag with room to sit up in, and use it accordingly, and it’s great. But not for extended time on the hills in winter and in rough weather…

The Argon 200 is a massive improvement over this, particularly with it’s generous sized porch and that means that cooking/wet gear has ample room. And only a 400g weight penalty is very liveable with for the advantages it gives (1.4kg for Helium 200, 1.8kg for Argon 200).

The pole construction (interlocked and crossing over) is another real bonus of the Argon over the Helium too – I expect this to mean the tent is significantly more stable in any level of breeze.

PS Please ignore the odd white “groundsheet” (actually some mountboard wrapping) under the tent. Call me odd, but I wanted to pitch the tent for the “first proper time” on the mountain rather than in my garden and this meant I could do a test pitch (and this write-up) before I set out 😉