Home » Reviews » Vango F10 Argon 200 review – on the hills
As I write this, the wind is howling around me, every so often a stronger gust comes and rattles the top of the tent. But I’m not worried, or cold either.

You see, I’m snuggled down in the Vango F10 Endurance 1300 sleeping bag (yes, it is the top bag in their range – lucky me 🙂 But it’s needed, honestly. This night-time timelapse game is a cold business and I really do need a warmer sleeping bag for this than I’d use for “ordinary” trekking or backpacking in colder climes. But more on that later 😉 )

And surrounding my cosy environs is the Vango F10 Argon 200.

The weather was so clagged in 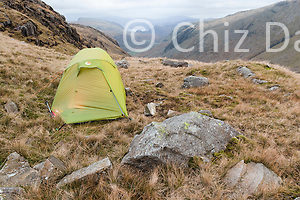 earlier today that I’d thought I was staying put at last night’s wildcamp for another night. Fortunately it cleared up enough to feel it might be worth a leisurely “pickup and move base” to a slightly different viewpoint in the hope of a chance at further timelapse shooting if it cleared overnight. (And perhaps get some mobile signal in the tent, rather than five damp and windy minutes walk away… if its feeling kind and reaches this far at all…)

Sadly (but perhaps unsurprisingly) the weather had other ideas for the evening. Timelapse shooting was put on hold for the night. No point risking the cameras in the clag, rain and Force 6 gusts when they can’t see more than 5m into the murk… But I was very cosy and able to relax in a way that can only happen when you have complete confidence that your tent is capable of standing up to the conditions out there.

My early thoughts on the good design of the tent can be found here. But having now used it in anger on the hills (in a variety of conditions) I would add the following:

Joined up thinking on the poles. Those joined-together poles seem like a seriously clever invention. Much kudos to whoever came up with that idea! The addition of those “looks simple, but are deceptively complex” hubs makes a very simple-to-use but rock-solid framework out of just three lightweight poles. And as soon as you plug the pole ends into the groundsheet tabs, you’ve got a rigid semi-geodesic frame to connect the rest to. In very calm conditions, you can erect the whole tent without a single peg! (But do peg down the windward edge before engaging any of the poles and clips if there’s even the slightest sort of breeze – you wouldn’t want the wind to pick up the tent and blow it away across the hills!) 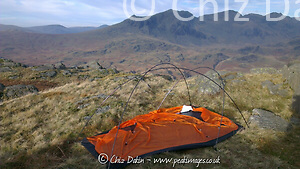 Footprints made easy. If you’re not entirely sure of the tent’s footprint size and shape, once those pole-ends are engaged you’ve got a lightweight frame that can very easily be shuffled round over potential pitching spots until you find the flattest, softest and rock-free spot that it fits well in. Then peg down the six tabs, clip the inner to the frame, the outer clips to the tabs and frame, and finally remaining peg points and guy ropes. And less than five mins later you have a comfortable home in the hills 🙂

Ditch the “toothpicks”. (The tiny yellow tent pegs and even the slightly larger blue ones). Yes, they look very fancy, and are incredibly light, but they’re a weight saving at the expense of solid confidence in strong winds. And for sure, they’ll be good enough in calm conditions, and yes, you can stick rocks on them to aid their strength. But really, they’re too small to be of real use in the rough stuff. Replace them with some longer stronger pegs – 18cm is a good length that doesn’t weigh too much, yet still feels surprisingly strong.

I have various sorts in my peg bag – some are Vango F10’s 18cm alloy pegs, others are some rather unusual yellow plastic “glow-in-the-dark” ones, (which seem a lot stronger than you’d expect for plastic!)

But if you really must save a few grams of weight at the expense of confidence in stronger winds, then take the blue ones rather than the yellow ones (and longer stronger ones should still be used on the corners and porch outer plus guylines) and rock them down well.

Stability. Making sure the guy ropes and porch vestibule pegpoints are taut makes a surprising difference to the overall stability. Get that right and it’ll be a lot more comfortable whatever the weather throws at you.

Central hook for damp clothes. That little central hook is great for taking one of those stretchy washing lines. Loop it over the porch pole (though the inner porch zip opening) and back to the hook and you’ve got a good amount of space to hang damp socks, gloves, etc.

Vertical walls. Unlike so many tents I’ve (failed to) sleep in, the walls are relatively vertical and (pitched right in even moderately strong winds) don’t suffer much from outer sag. Which means you can really use most of that inner space without fearing the dreaded wet walls as outer touches inner and soaks it through.

Sharing with others? That said, it’ll be a tight squeeze for two. Not really an option if one of you (like me) is carting an obscene amount of camera gear as well. Or if either of you have one of those nice wide Exped inflatable mats. Or you don’t want to be so close that you might as well share a sleeping bag 😉 But if none of those apply and weight (and bulk) is at a serious premium, you could get away with it on a short trip. But that probably depends a lot on the personalities of the two of you and how much you value room to breathe over extra weight… UPDATE it takes two quite happily on shorter trips – as long as one of you isn’t carting the obscene amount of camera kit I was last winter 😉

Going solo? For one, particularly on an extended trip, or with a lot of gear, the space is fantastic. Room to really have things organised and spread out without the thing you want always being at the bottom of the rucksack 🙂

Condensation? This is a tent which is designed for use in moderately high winds and is designed to be as light as possible while still being strong in rough weather. As such condensation is inevitably a bit more of a factor than in some heavier but less stable tents. Keeping the inner porch open as much as possible overnight, and the ventilation flap in the outer (which is good in all but horizontal rain!) and choosing your camping spot so that there is some airflow (while protecting the tent from serious (ie storm-level) gusts helps a lot to keep this to a minimum.

Inner Porch Zip. The design of the inner porch zip means you have easy access when needed, but also minimal risk of be interior getting wet when cooking in the porch in wet weather. I’ve seen an awful lot of worse designs here 🙂

I could go on, but my sleeping bag is calling the small bit of me that’s outside it, typing type this up on an iPad mini… As is the last bit of the tiny amount of red wine I carry into the hills (that makes the thought of carrying a 25+kg rucksack more bearable on the walk in). That reminds me, I really must tell you about this wonderful sleeping bag next… But that’s for another day now.

As often happens on the hills, the wind woke me up that night as it picked up 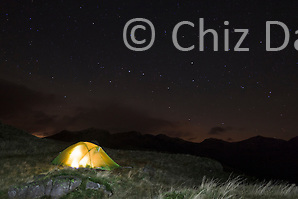 some strength and started to hit the tent sides with some degree of force as a minor gale arrived. (I reckon it was about a steady Force 5-6, with strongest gusts being anywhere between Force 7 and 8. Strong enough that walking is hard in such conditions, but not a serious full-on storm). In every other tent I’ve been sleeping in when this has happened, the inevitable next stage is “ok, which pegs do I have to repeg/rerock and which guys do I have tighten further…” or even “is the tent going to survive this…?”

Not so in this case… I shine my headtorch around the inside of the tent, the walls are shaking a bit as the strongest gusts hit, but nothing much. No need to venture out into the cold wind and wet. Really, I can just turn over and go back to sleep, confident that the tent will be fine ’til morning.

Now that’s really rather remarkable in a tent that only weighs 1.8kg… (well, OK, perhaps 1.9kg now I’ve put some heavier pegs in it!)