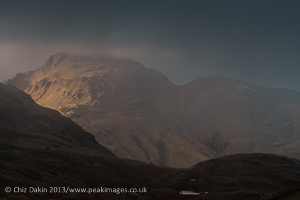 Home » Photography » Disaster on the fells…
It was briefly a gorgeous afternoon – the clag had lifted, the sun was out, and I even had some company of a fellow hill-walker for a short while. I’d gone up to Esk Hause with the intention of a quick suss out of a few views for later on, but got side-tracked on the way as the clag wavered above the Borrowdale valley and then Great Gable. 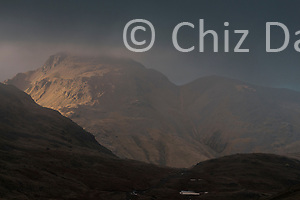 But I couldn’t stay long at Esk Hause – although I had the rare luxury of the tent already being pitched, I had a timelapse to set off that evening, and I still needed to collect some water for the night’s camp. Fortunately there was a fast flowing stream coming from high up on the fells on the way back to the tent that I’d noticed earlier. Time to part company with the fell-walker and get on with things.

I filled my water pouch, and then the sun sneaked in to give another cracking view across to Great Gable. Stopping hastily I grabbed some more shots, and a few clips of video too. Onwards Chiz, you need the daylight for setting up those cams!

But alas it was a case of more haste, less speed. Distaster was not long to strike. As I was stomping down the main path to Sprinkling Tarn, the water pouch was being awkward in my hands. And then fell on the floor. Putting the tripod down, I bent down to pick up the water pouch.

And then I realised Disaster #1 had happened – the pouch had gained a huge split in it’s bottom, and was gushing like a waterfall as I tried to lift it up. Putting it down hastily in the hope it wouldn’t leak further (at that moment I had no other means of carrying water back to the tent for the night) I then heard an almighty crash. 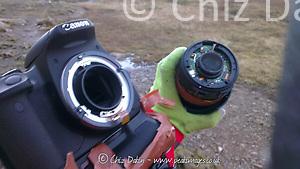 Disaster #2 was much more serious. I still have no idea how it happened, but my tripod and camera were on the ground, and far more seriously, my lovely Sigma 17-50 f/2.8 lens (that has become my workhorse lens since gaining the 650D) was now in two pieces. I can survive (albeit unhappily) without water for one night, but that ruined my chance of both photos and a second timelapse that night.

Fortunately I’m carrying two cameras on this trip – and the 5mk2 is still safely tucked up with it’s Sigma 20mm f/1.8 lens. That means one timelapse is still possible, but no photos from the time I set it up (before dusk) until I retrieve it in the morning and replace the batteries. And collecting my pan from the tent solved the issue of collecting the water remaining in the pouch – although not what to do with it when I needed to cook dinner without using all of it at once…

As for the timelapse, frustratingly once again the weather had other ideas… Having set the 5mk2 up on the hills above me (unusually for this one, there was no place anywhere close by to camp) the clag came down thick and fast with nightfall. I crossed fingers and toes that it was just temporary and it would clear again early enough in the timelapse to give enough useable footage by morning.

And then staggered down through the rapidly closing in murk to the tent. Although I normally rate myself as reasonably competant at navigation, I was glad I’d marked the tent and camera positions on the GPS – in the dark and clag I found myself straying far too far left – and hitting the path near the tarn much lower than intended. Definitely time for food and probably some chocolate too! Then to send an email to find out how expensive the lens’s situation was going to be and if I (as expected) needed to summon up the courage to speak to my photographic insurers…

(And got a remarkably fast answer from Sigma – it may not be as bad as I think – but need to speak to the service team in the morning.) The next morning the clag was still thick, but worse still the rain was now horizontal and the wind had changed 180degrees – no chance even to have the outer vent open in the tent, let alone the porch open to brew a coffee. And the mobile signal (which hadn’t been bad the previous night) had all but vanished too.

It took longer than it should have to pack the tent up and collect the camera. And I was unsure whether to be happy that my broken lens hadn’t missed any great shots overnight, or even more frustrated that it had most likely been completely clagged in all night (UPDATE: It had been clagged in all night :/ ). But eventually I was down at the Wasdale Head Inn, drying out my outer layers by the fire while making use of their payphone by a lovely warm heater in the bar. The Sigma design appears to have helped significantly with my lenses accident. Unlike Canon or Nikon – who only make lenses for their own cameras – Sigma make lenses for several different manufacturer’s camera bodies. Which means that each lens has to have a point where the specific manufacturer’s connecting ring joins the lens assembly. It seems that my lens sheared straight off at this point at it hit the ground, making the repair remarkably straightforward. And most likely coming under their fixed rate fee of £100. (UPDATE: It did!)

Better still, if I can get the lens to them by tomorrow (Fri) they are confident they can get it back to me before Christmas (ie Tues – Xmas Eve!) Now that is seriously good service 🙂 And faster than Canon’s own pro scheme would normally have managed had it been a Canon lens. (Never mind the 650D body, which for some really frustrating reason, doesn’t come under Canon’s pro scheme – but miraculously appears to have escaped unscathed!)

(UPDATE: Lens returned on Xmas Eve – in time for commissioned shoot between Xmas and New Year!)