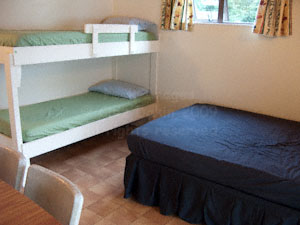 I’d been hoping to continue the diving adventure on the Rainbow Warrior, but after 4 days of phoning 3 different operators and always being told that conditions were too rough to operate (“we’ve got 2.5m swell in just the bay, let alone out in the ocean – so we’re not going out to the Rainbow Warrior tomorrow or the next day!) and a poor forecast for the week ahead, I gave up and headed to the Coromandel, where the forecast was better.

A basic cabin at a holiday park in Whitianga.

But oh no! NZ forecasts are as unreliable as the UKs! (some thing to do with being an island nation at the edge of a large ocean perhaps?) and by the time I got there, so had the bad weather 🙁 However, that didn’t stop DiveHQ in Whitianga from saying right up until 0715 on the morning of the dive that they were still running the trip and they’d find somewhere sheltered from the weather and good for photography. And then the phone call came – “sorry we’re not running the trip today”. I’d been awake about half an hour by then, and the rain had been drumming on the roof of the cabin I was in pretty hard, so it wasn’t a complete surprise.

Having said that, I would call them a bunch of wusses scared of getting wet(!), but I guess the East Cape did get washed out by the storm (albeit it’s over 300km away!),  and DiveHQ’s boat is very little, so it would have been a very wet and cold trip. But that’s still no reason not to listen to the forecast and save folks from driving all the way out to the Coromandel, when it’s obvious the trip’s highly likely to be cancelled the next day. (It seemed fairly obvious from the forecast once I got to the Coromandel, but when the locals reckon they’ll still be able to run in the face of a bad forecast, you have to assume they know local conditions better than a general forecast – until its proved otherwise!)

So sadly I can’t report on the Rainbow Warrior, Alderman Isles or Mercury Bay dive sites from this trip – that will have to wait til a return visit to NZ. I was intending to stay for a while in the Coromandel, but the forecast was looking dire for a while, and after a drive back to Auckland to drop off the underwater flash, a 3-4hr drive back again on fairly narrow and winding roads wasn’t too appealing. So I ended up in Devonport for the night.