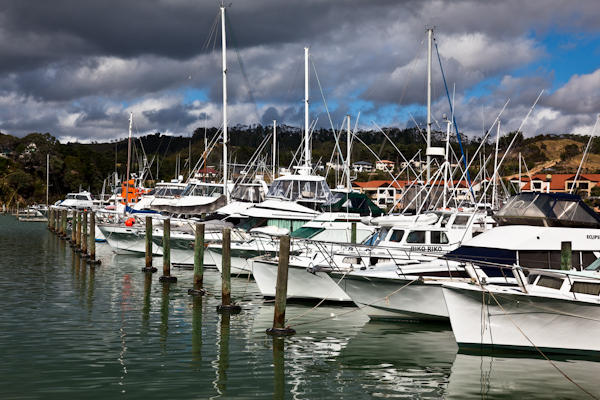 I hired some Ikelite underwater flashes, and took them to a place rated as one of the Top 10 Dive sites in the world by the late Jacques Cousteau. It’s somewhere I’ve been wanting to come to for a long while, having not managed to get here 10 years ago when I first qualified as a diver. The base village (with a campsite, village store, cafe, 1 posh hotel, angling clubhouse and a pizza place that’s only open Thurs-Sat) is Tutukaka, just 2-3 hours up the road from Auckland and roughly 1-2 hrs south of the Bay of Islands.

[singlepic id=1824 w=320 h=240 float=left]There’s a number of different dive operators working out of Tutukaka. However, something to be aware of is that many of the charter boats in Tutukaka operating live-aboards on the Poor Knights are “whole boat” charters only – ie no use to the individual diver! The only other way to get out on a live-aboard is that some of these whole-boat charters are occasionally booked out by Auckland-based dive shops, and individuals can book through the dive shop… assuming they know which dive shop has booked which boat, when!!

The main exception is Ocean Blue Diving, they are hard to find out about, but run live-aboard trips open to individual divers. Poor Knights divers are usually the cheapest and sounded a good option – sometimes they have a special offer of $150NZ for 2 dives including all gear! Dive Tutukaka is the main operator though, with a good base in the marina, several boats, and more well-trained staff than I can count! Their 2-dive offering will set you back $225NZ including all gear.

In 5 days, with 2 different boats, 5 different skippers, nearly always a different crew on the boat each day, and different buddies/groups each day, I’ve managed to get to 12 different sites (sometimes we covered two in a dive – they can be that close together!) – and not a single one repeated! That’s quite impressive, and each one has had its own special attraction.

And after that amount of time diving in the location, I now realise why folks say the Poor Knights deserves its top 10 world dive site ranking. It’s not that any one site is so gob-smackingly awesome that it makes it on it’s own merits (though some are pretty awesome – Northern Arch was one of those for me!) – it’s the sheer quantity of dive sites that are all good, spread across such a small area. There’s more than 60 sites to dive, and not one of the 12 dive sites I saw were uninspiring.

Crinoid Cliffs (locally known as Paranoid Cliffs due to the closeness of the anchor point to the island cliffs) was close enough to the Blue Mao Mao arch that it would have been rude not to have dropped in on that one while we were there! It was quite tough getting into the arch – there was a significant current running through it – but the rewards of a stingray and a school of trevally were worth the struggle. And I pretty much flew back out of the arch on the return – current surfing can be very cool!

Northern Arch was another site that had a significant current running when we visited. That one was a little more dangerous – the current was running away from the boat, and proved very hard to swim back against. Another issue with Northern Arch to be aware of – it’s very easy to get far deeper than you intended! I had roughly 4 mins left before the dive went into deco time… not exactly what I intended – but neither was the 30.1m depth logged either! That said, as long as you are aware of the potential issues on this site, it was one of the more awesome locations in its own right – and the schools of fish and a couple of stingrays hanging round the arch definitely made up for any diving-related issues!

Trevor’s Pinnacles, Landing Bay Pinnacle and Mary’s Wall had lots of morays (yellow, grey, stripey, mosaic etc) and scorpion fish. Gardens was good for having a fantastic cave with a large school of blue maomao and just one stripey fish in between them all! And diving in Rico Rico cave was an experience like no other – and good for wide-angle pix of divers silhouetted against the cave entrance!

The sites were all good for photography – some were better for macro, some better for wide-angle, and some had too many damselfish getting in the way of shots of more exotic creatures like scorpionfish (a relative of the Australian stonefish, but much less dangerous!) and lobster.