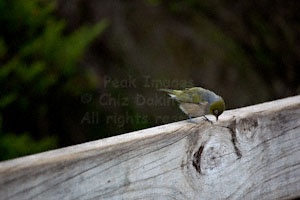 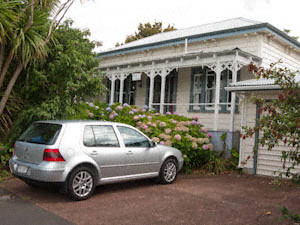 Having fallen on my feet with an I-site that’s helpful and knowledgeable in Devonport, I ended up at the one and only affordable B&B in Devonport – the Secret Garden on Eton Terrace. Run by the friendly and knowledgeable Xenia and Tony, it was really nice to have a proper double bed and homely bathroom after so many nights spent in either hostels or basic campsite cabins. Though I think I was quite lucky to get a bed at such short notice for two nights there – they’ve only two rooms and are now fully booked up til March 2010!

But staying in Devonport meant the next day I could visit one of the Huaraki Gulf Islands (the islands in Auckland’s Eastern Bay) – the volcanic island of Rangitoto in fact. Staying in Devonport was a very sneaky move for being close to Auckland City Centre (its only 10mins away by ferry, which runs frequently throughout the day and late into the night) yet being totally out of the city centre hubbub and party hostel scene.

Although there’s no reduction on the cost of the ticket ($NZ25) for the shorter journey, the ferry out to Rangitoto from Auckland stops off at Devonport on the way, making it far more convenient than having to find a day-long parking place in Auckland city centre that doesn’t require a mortgage to pay for it! The journey out to Rangitoto is short, roughly 20mins, but can be quite chilly – often quite a contrast to the heat of scoria-strewn Rangitoto.

Rangitoto is the newest island in the Auckland Bay area, being Auckland’s most recent volcano. Auckland lies on a volcanic hot-spot, part of the Pacific “Ring of Fire”, and the remnants of previous, but now dormant, volcanoes can be seen all around the city – such as One Tree Hill, Mt Eden, Auckland Domain, Mt Wellington and Northshore’s Mt Victoria. Rangitoto first started to appear roughly 600 years ago and it must have been quite a shock to the Maori inhabitants of the neighbouring Motutapu island to see a new island appearing with violent eruptions just offshore from their settlements. 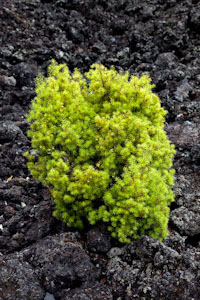 Early colonising shrub growing on the lava of Rangitoto Island

The island itself, not surprisingly, is largely made up of lava (or the aa variety) and scoria – or volcanic cinder. Related to pumice and basalt, scoria is full of interconnected holes, formed where gas bubbles were trapped in the cooling rock. The inter-connectedness of the gas-bubble holes and the greater density of the rock means that unlike pumice, where the holes tend to trap pockets of air underwater, scoria does not float on water.

Cheeky little waxeye eyeing up some crumbs on the boardwalk

There are several walking tracks on the island, although the early time of the last ferry back (often 1530) and lack of any form of accommodation on the island (although neighbouring Motutapu has a DOC campsite several hours walk away), means that it is hard to do the further or longer walks round the northern or western part of the island. So most folks tend to do the summit track – roughly 1.5 to 2.5 hours return (depending how hot and humid the day is), followed by the crater rim (15-20 mins), a diversion to the lava caves and a couple of other diversions on the way there or back – Kidney Fern Glen, or the historic preserved bachs being some of the more popular side-tracks. The summit walkway gives an excellent view over Auckland on a clear day, and also is home to a whole tribe of cheeky little waxeyes waiting to steal any crumbs you drop!

It’s worth taking plenty of water, sunscreen, sunhat and windproofs. When the sun is out, it can be very hot and humid, and the scoria reflects the UV rays very effectively, making it very easy to get sunburnt here. But when the clouds roll in, and the wind picks up, or it starts to rain, it can feel quite chilly – truly one of those awkward weather destinations where taking all the clothes necessary for all the conditions that might be encountered can make the rucksac unpleasantly heavy! And while it is thought that there is a large lens of fresh ground-water underneath the island, there’s no fresh drinking water on the island at all – it’s too soon for streams to have formed.

The vegetation is a botanists paradise. Being such a new island this is a fantastic place to see colonisation and evolution in action. There are many unusual varieties of plant already in existence on the island – from the Northern Rata/Pohutukawa tree hybrids to the alpine lichens growing near sea level, whose unique behaviour on Rangitoto is not known anywhere else. And DOC states that Rangitoto has already acquired the largest forest of the red-flowering pohutukawa trees in existence – making it quite a sanctuary for this beautiful but threatened iconic tree of New Zealand.

The island is also undergoing final pest eradication courtesy of DOC – the removal of rats, possums, wildcats and other exotic mammals is  allowing native NZ birds such as the kaka to find a pest-free sanctuary here, in a similar way to Tititiri Matangi island, further north in the Huaraki Gulf.

2 thoughts on “A Devonport hide-away and Rangitoto Island – Auckland’s nearest and most recent volcano!”