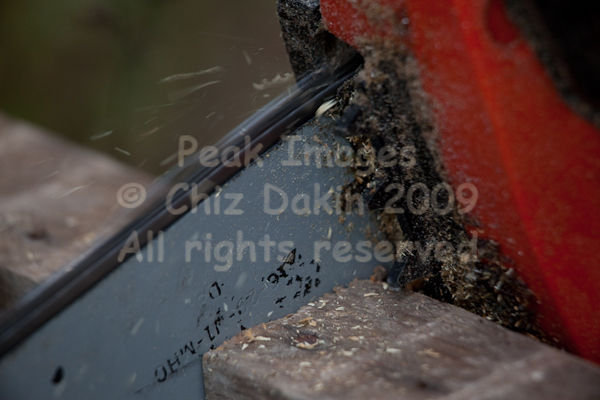 Learning about depth of field and lens apertures can be daunting to the novice photographer – for starters it all seems back to front that a large large number for the lens aperture means a small hole! And that large holes mean only a small area in focus…

Putting together a series of images that tell a story in pictures can be just as daunting – where do you start? But shallow depth of field is a good technique to learn, and practice makes perfect. Better still, there are plenty of opportunities for practice without even setting foot outside your garden.

Take this morning for example. We are fortunate to have an open fire in our house, and recently a friend has been clearing out the garden of their new house. Which has given us such a good supply of wood that we’re almost struggling to keep up with supply! So when my husband donned the bright orange safety gear to do some chainsawing, it seemed a good opportunity to take some pictures and put together a short tutorial on “Shallow Depth of Field” and “Story Telling With a Series of Images”. 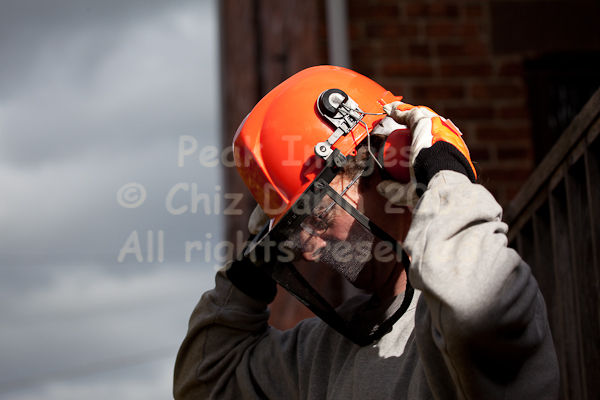 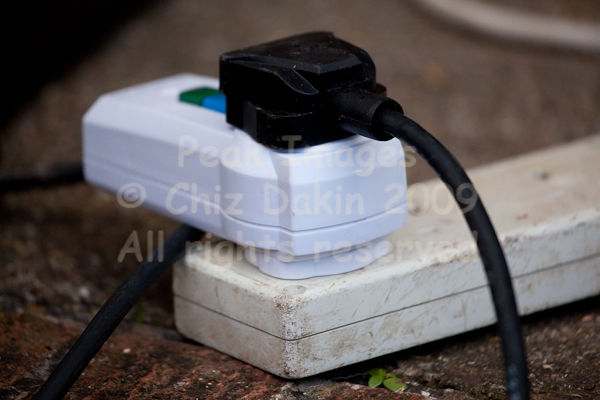 First task is to set the scene – chainsawing is a dangerous business so a picture of some of the safety gear is a good idea. And it’s important that the worker doesn’t forget to plug the chainsaw into a remote circuit breaker too!

A large aperture (small number – in this case f5.6 at 120mm) gives good focus on the head of the worker, but allows the background to be pleasantly blurred out of focus. The angle and colour of the sunlight falling on the worker’s helmet was of course what attracted me to doing this short series of images in the first place! The depth of field (amount in focus) on the RCB is also kept to a minimum to highlight the plugged-in bit (and it was a rather boring shot otherwise, so this helps to add a little bit of creativity!)

The next logical image for the story is a wider-angle view setting the scene of the activity as a whole – of course this is when the sun went in – seemingly for good! 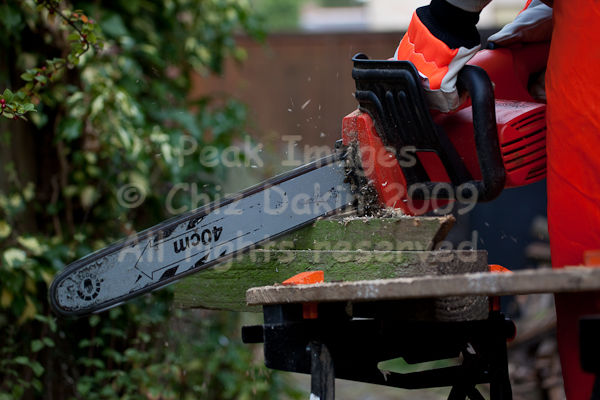 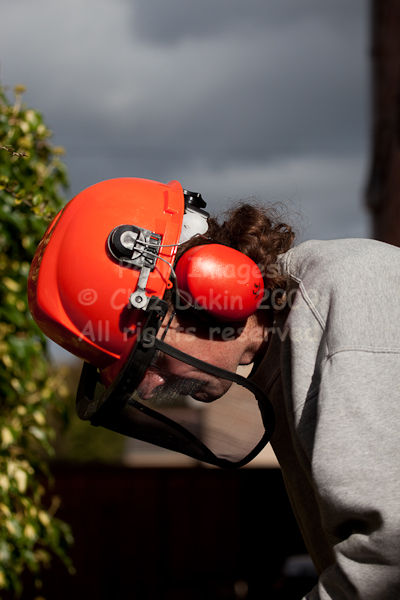 But although there were no longer the nice sunlit highlights, the low contrast was actually a bonus – the reflective hotspots of the gloves and leaves were much better contained in the flatter light. Again the shallow depth of field is attained by a wide aperture (f4.5 at 105mm – nearly the widest angle my 100-400 will go to!) and this helps focus the viewer on the action taking place. The background adds to the context, but by intentionally blurring it, it doesn’t take attention away from the main activity.

The concentration it takes to use a chainsaw safely was another image I wanted to capture. And this is a good example of how the order in which you take the images doesn’t have to be the order in which they will finally be used. My husband was just getting on with the work while I was playing – not being a posed model in any sense (other than changing the direction his workbench was facing, so that it was better lined up against the sun!)

While I was taking a shot of him putting his safety gear on, I realised that later in the story I’d want an image of him concentrating on the task. So it made sense to shoot this at the same time, as it was quite a similar set-up and didn’t involve me finding an alternative position to shoot from (necessary for other shots in the sequence). So this image makes it appear as if the sun was going in and out frequently – it wasn’t, when the big cloud came in that was it 🙁 But it was a shot that the sunlight would make or break, another reason to get it “out of sequence”. 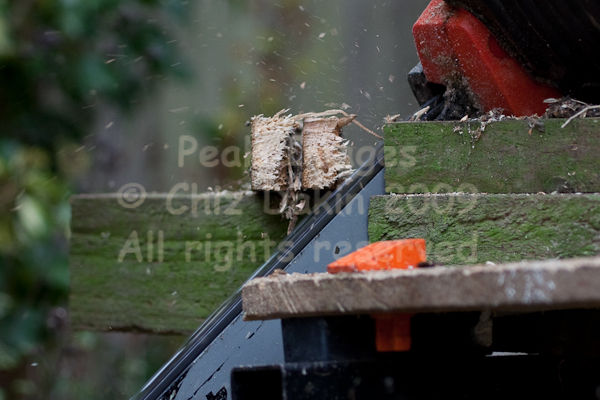 The next step was to get a good shot of the chainsaw cutting through the wood – this time I wanted the focus on the cutting point, and the parts of wood and chainsaw nearest to this in sufficiently sharp focus, but the background blurred out. This helps concentrate the viewer focus on the important part of the image – the wood being cut. I tried several shots but eventually decided I wanted to be closer to the action – though not TOO close! – to emphasise the chainsaw cutting through the wood, yet still show a bit of background context. 100mm was the focal length, the widest this lens goes, but using feet as the zoom improves the composition far better than just zooming in with the lens! And by keeping well to the side of the chainsaw (and trusting my husband’s skills!) I felt I was far enough out of the way to keep safe.

But of course, I wanted to zoom much closer in, to really show the detail of the blade in motion and all the little chips of wood flying out of the blade as it cuts the length of wood. I tried 400mm on the lens, but that wasn’t enough. So an extension tube is the answer, to bring the lens’s nearest focus distance down to roughly 1m, still at f5.6 for minimum depth of field and maximum background blurring (f5.6 is the widest aperture this lens can have at 400mm). The shutter speed was only 1/250s which handheld was quite a challenge with a lens of this weight! This is where a lens with image stabilisation, a steady hand and recent camera’s ability to shoot acceptable quality at high ISO levels (this was shot at ISO800) becomes a real help to getting sharp enough results. 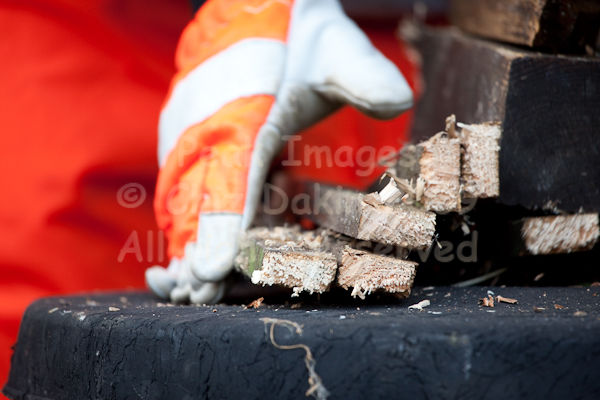 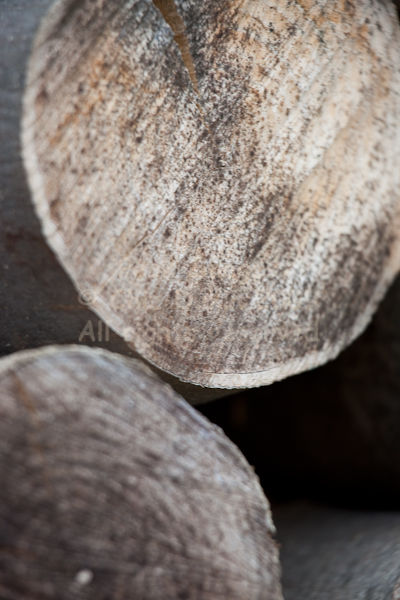 Now the story needs finishing off – so think about what happens when all the wood is sawn up… It needs collecting and stacking, so a close up of my husband gathering up a few smaller chopped pieces tells that stage of the story. Again it’s the smallest number on the Av setting (f5.6 – or wide-open aperture) to keep the focus firmly on the wood being collected and to minimise the overpowering colour and distraction of the safety chaps. Shooting this image in flatter, cloudy light also helped with this by reducing the risk of highlight hot-spots on the gloves and chaps caused by reflected sun.

And finally the finished woodpile – well-stocked for winter 🙂 Some folks may argue that I should have taken a wider view of this, but the amount of clutter around it didn’t make for the best image!  And again this article is really about shallow depth of field – used in this case to make a more creative image of an otherwise rather boring subject.

As I write this, I also realise that I didn’t take the real final image of the story – my husband slurping a well-earned tea at the end of the job! But he’s now washed and changed, so that will have to be a thought for the for next time I shoot a series of images of him working!

And that brings me to my last point – after doing a shoot like this, think back on the images you have taken, and what might work better for next time!