Home » Other » Peak District doodled, err Googled… then “Trekked”
No, wait a minute, that was doodled, Google Doodled! The Peak District became the first UK National Park to be featured in the Google doodle today.

As Jim Dixon, chief executive of the Peak District National Park Authority, explains “I’m really excited that Google has chosen to reflect the Peak District National Park on their home page. The ‘Google Doodle’ has become an institution since Google’s founders began to change the famous Google logo to reflect different stories.  As the World now increasingly uses the Google search engine to go about its business, being selected to be a ‘Doodle ‘ is very prestigious.  Across the World only a very few national parks have featured, including Yosemite on its birthday and Mount Fuji when it achieved World Heritage Status.  In the UK iconic places such as the British Museum and Dr Who have been ‘Doodled’.” 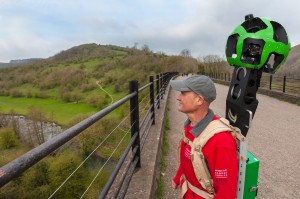 The doodle commemorates both the fact that it is exactly 63 years since the creation of the Peak District National Park, and (I rather suspect, more importantly in the eyes of Google) it’s also the first day of the park borrowing the Google Trekker to map some of the National Park’s outdoors trails in the same way as Google have been mapping roads with Streetview over the past 5 years.

The Doodle is a graphical representation of the ‘Salt Cellar’ – a gritstone pillar on Derwent Edge set inside a typical Peak District millstone balanced on a drystone wall.

The Google Trekker perches on top of a specially designed backpack, fitted with a 15-angle lens camera, which takes 360 degree pictures every 2.5 seconds. These are then added to Street View, available through Google Maps.

The Trekker is being loaned to the national park authority, whose rangers will be out using it. Some of the places expected to be “Trekked” include