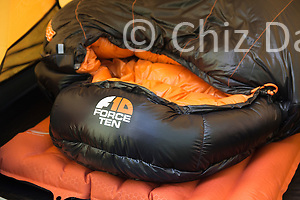 This sleeping bag (and the weather over the winter of 2013-14) has changed my thoughts on how warm I like to be overnight in the hills! I have to admit that when it first arrived, I wasn’t 100% convinced that it was the best one for the job, I actually thought it would be too warm for me. And that made this review hard to start writing.

But fast forward a few months and some heavy usage later, and I begin to suspect that Vango/Force 10 actually had a much better idea of the conditions I was going to be encountering than I did at the time it arrived. 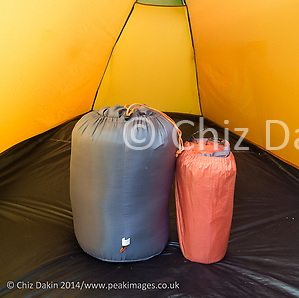 Comparison of size with an Exped 7 synthetic sleeping mat

First of all though, lets get something out the way. Yes, this sleeping bag isn’t the smallest or lightest 4 season bag that exists… But you’ll also be hard pressed to find one as warm, without going to serious Everest-level gear. Someone who sleeps warm may find it’s suggested upper limit of +10C a bit too cozy in above-zero temperatures, but those who sleep cold will really appreciate it’s rating to -25C (with -45C as an extreme risk level). Or indeed, those that are stupid enough to faff around with cameras in the freezing night without a down jacket (like myself…). But this sort of warmth isn’t ever found in a tiny package.

As another way of comparison, I used a Corinthia sleeping bag system in South Georgia, and compared to that, its positively svelte in size. Albeit the Corinthia was synthetic rather than down, the conditions expected were remarkably similar – temperatures +2 mizzle/rain to -10C whiteout all with howling gales. Although there was no escape option in S. Georgia. It’s not easy to compare across a time gap, but I think the Endurance 1300 was a fair bit warmer than the Corinthia, despite being a single bag rather than a double bag system. But in South Georgia I had a pulka (sledge) to carry things in, which meant that weight and bulk wasn’t (much of) an issue, whereas in the Lake District this winter, the Endurance 1300 had to fit in my rucksack along with wildcamping gear and night-time timelapse gear. And that meant it needed to be a lot smaller than the Corinthia!

So it was that every time I packed my rucksack for another trip to the Lakes, I questioned whether I shouldn’t try and take a  much less warm bag to save space and weight. 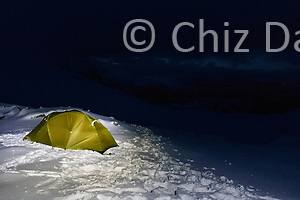 And every time I was on the fells, having spent the time it takes to set up the timelapse gear in howling gales and close to or sub-zero temperatures, I was always extremely thankful that I hadn’t compromised on warmth for smaller rucksack space. On more than one occasion I crawled into the Endurance 1300 too cold to think, too cold to light the stove for a warm drink and just huddled in it until I’d thawed out a bit.That thawing out probably wouldn’t have happened without additional sources of warmth (eg hotpads or a hot drink/water bottle) in my lighter-weight bag. 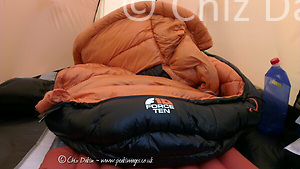 Quite aside from its sheer snuggly warmth there are some really nice features on this bag too – the little inside pocket is a great place to keep a mobile phone/wallet out of any overnight condensation in the tent, or to stow a headtorch overnight. The baffles over the zip are excellent at keeping out draughts. And the “dotted” patches on the bottom of the bag help to keep it from sliding down a sleeping mat in the (fairly common) situation where the ground isn’t completely level. And, perhaps most importantly, the outer shell is made of water-resistant material, which really seems to work. (The Endurance 1300 seems a lot more tolerant of claggy, mizzly, humid, damp, high condensation conditions (ie typical UK winter) than any other down bag I’ve used in a tent).

While the majority of the bag is down, there are a few places where a small amount of synthetic filling is also present – the toe box, the chest panels and hood, so if the bag is unlucky enough to get damp the synthetic bits will make a real difference to its ability to still keep you warm. 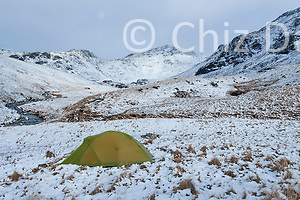 Being part-synthetic, the toe box is tolerant of putting dry-bag wrapped boots in, to stop them freezing overnight, which can be essential in the kind of conditions this bag is likely to encounter. (This also has a side-benefit for those of us that are significantly less than 6 foot tall – it fills an otherwise hollow gap at the bottom of the bag, which brings its warmth back to that expected!)

There are also a couple of handy hanging loops on the toe. Not a requirement for my uses but I suspect for multiday climbing (ie pitching on the route) in cold conditions, these would be very useful for security on a porta-ledge.

In summary, if you sleep warm, and aren’t doing activities which require you to setup gear outdoors at night in highly inclement winter conditions, this bag may be too warm for you in all but the worst of a UK winter. (In which case its little brother, the Endurance 800, looks like a very good option). But if you do need the warmth it provides (perhaps if you’re off to higher altitudes or latitudes, or doing cold work overnight which you need a good bag to help you thaw out from), and weight and bulk isn’t at an extreme premium, the Endurance 1300 is a fantastic option which will fit in an 80l rucksack with enough space to spare for the rest of your winter wildcamping gear and is well worth every gram and cubic centimetre it takes up.