Home » Cycling » Discovering road bikes with the Norco Tactic 105
While in Perth I had the chance to hire a carbon fibre road bike. Not normally the sort of bike I’d have chosen for a variety of reasons. 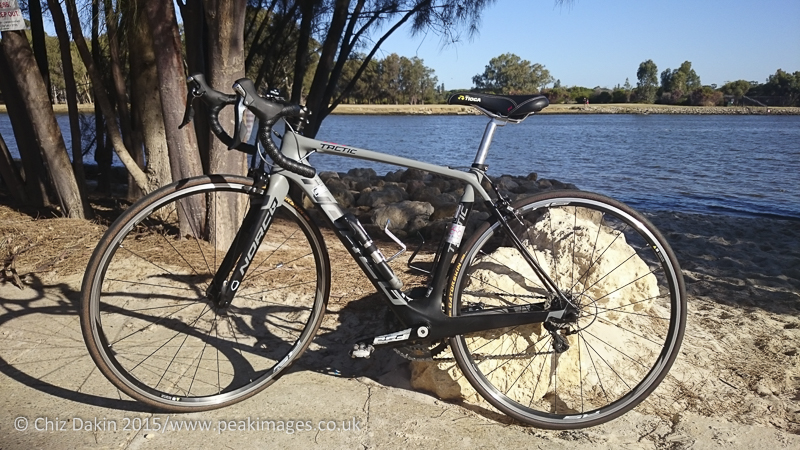 After all it’s a road bike. And having ridden MTB/MTB-touring bikes for so many years now, until I rode this one I really didn’t get the point of road bikes. After all, compared to an MTB, they have no brakes to speak of, their tyres are thin to the point of daftness (won’t they puncture just by looking at them?!), the gears are set stupidly high so that no mere mortal has a hope of getting up hills without seriously and unnecessarily stressing the thighs (or giving up and walking), the drop handlebars are in a daft position that will knacker the back etc etc.

Ok, I was clearly a tad biased and out of date on my opinions! And while many of those points may have been true until the 90s (the last time I seriously looked at one, with the intention of riding it myself) things have moved on rather a lot since then.

And so I thought I’d give the Norco Tactic a go as it was the first chance I’d had to try a carbon road bike. It was a 2015 model (I think) with 105 setup. So good components, but not silly money.

The gears took a while to get used to as I’ve never used combined brake shifters before, but weren’t hard to get the hang of (even if it took a bit longer to figure out which was up and which was down – opposite ways front and back just for double confusion!). The tyres and frame were very stiff – but that translated to a springy fast accelerating ride, which felt very nimble. Cornering was fun and on the few hilly bits I could find (I hadn’t yet discovered the Perth hills – way out east of the city) the light weight of the Tactic really helped reduce the effort.

But it was loading the bike in and out of the hire car and carrying it over my shoulder up a flight of stairs to our apartment where I really noticed the lightweight advantage. It was so easy! Could almost hold the bike on one finger! Not like my Raven which fights me every step of the way into the car and feel like a lead weight if I have to carry it up over any obstacle. (For comparison the Raven is 15kg and the Tactic about 7.5kg!)

Result: grin factor enormous. n=1 concept dead in the water. Do I want a road bike as well now? Quite possibly! And I promise I won’t diss them as not being for me any longer!

But I still want the opportunity to explore a bit off-road too – even if I’d limit that to easy off-road/trails with anything road-bike-based…  Could a cyclocross bike be the answer? Would that perhaps combine the best of an all-out lightweight racer like the Tactic, with just enough strength to handle gentle off road? Or would something entirely unexpected fit the bill better?

Updated 2017: The gravel bike was indeed the answer – and it seems it’s a fast growing trend. With good reason!