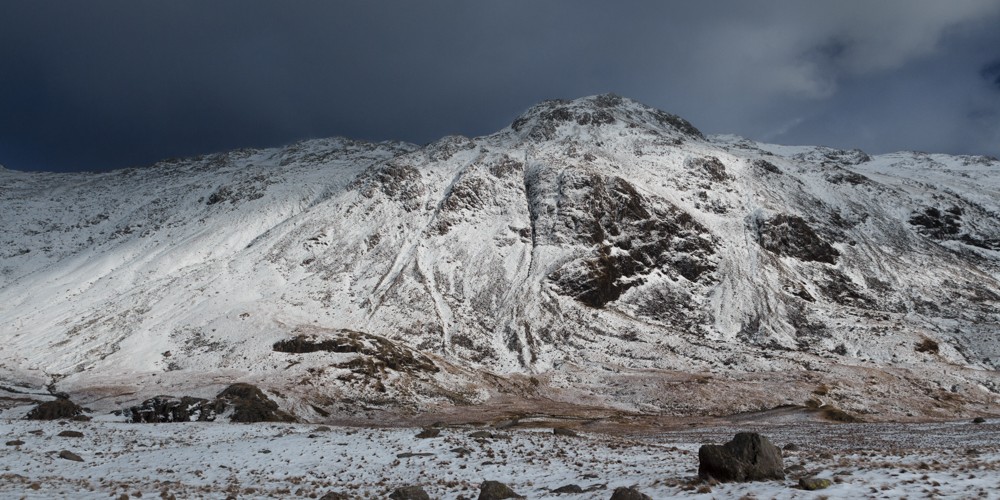 Home » Photography » A wild 24hrs on the hills 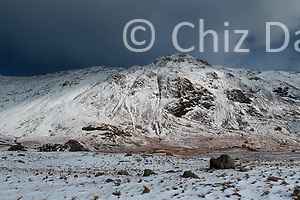 It wasn’t meant to be windy tonight, that was meant to have been this morning. But as ever weather forecasting for the mountains is a very imprecise art. So the first snow of this trip had come in the morning, but not the wind. That arrived just before dusk and, of course, just before I’d got the tent pitched, rather than after it was up!

It came initially as a squall, inky black clouds racing across the horizon with rocket-speed and bullet-hard hailstones falling from the leading edge. Only half a pea sized, but very painful when 1000’s of them land on you – in your face, eyes, fingers, everywhere in fact. And the thinner the layer of clothing, the more they hurt! Time to hide behind a boulder while this passed through, then find a good spot for my tent. One good thing about it though – it showed up very clearly the spots that were least protected from the wind – and exactly which direction it was blowing from. 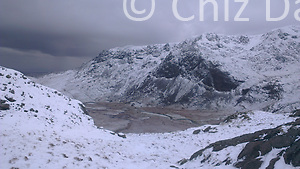 flat spots lower down for being too little protected from strong gusts. But, although quite high up, there was a nice spot just behind a small outcrop, sheltered from the current wind direction and nicely flat. In fact there were two spots, the one nearest the outcrop initially seemed best, but the one a tad further away was where I ended up pitching the tent.
The better choice too as I discovered later… the snow on the first spot was quite deep and very easy to break through while walking across it. My chosen spot was still well covered with snow, but not so prone to making holes in with pressure of feet, hands or even knees or hips (as I snuggled into my lovely warm sleeping bag later on).

Once the tent was up, it was time to continue my hunt for some good timelapse spots, and also for mobile signal. I’d not had that for a while, and I was keen to check the weather forecast, although it had been promising when I set out for all but this morning. I was still hopeful of light winds once the squall had passed – probably it was just being a bit later than forecast – nothing unusual in that. 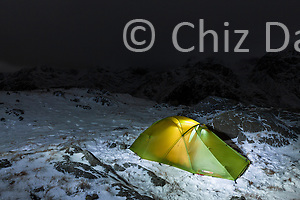 I was in luck – a small bit of signal could be found – albeit in a very exposed and windy spot on top of the crags. Err, hurricane-strength gusts forecast for tomorrow. Oh ****. That wasn’t expected…

Another, do I stay or do I go moment. While I’ve been wild-camping in fairly daft conditions trying to get timelapse footage this winter, hurricane-strength winds are a different order of magnitude to most of the gales we’ve had, and are not to be taken at all lightly. So getting off the hill in advance is the only sensible choice.

But they’re not due until late tomorrow. And the stars are playing with me – hinting they’ll come out, then disappearing.

I make the decision to stay until the timelapse is done, then see what the weather is doing. Descending in the dark isn’t fun, but it may be wise to get to lower ground – after all I’ve still got an awkward river crossing to pass on the way out.

But it clags in, and when I collect the camera later on I discover that the remote control battery has failed (there’s no way of telling how long they last or how much charge there is left – eventually one will fail. As it just did). The wind has dropped though. The crag behind me is protecting me once more from all but largest of squalls, which seem to have died down. 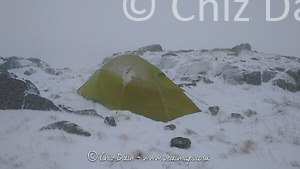 As visibility isn’t great and I’m well sheltered for the time being, I decide to delay packing up until its light. Will be easier to see what I’m doing and safer to descend in the light and hopefully the storm won’t arrive much earlier than thought.

Although the wind howls around the valleys from time to time, nothing troubles the tent, other than having to knock bits of snow off the walls every so often. In the morning though, the wind is picking up and the temperature is rising fast. No longer snowing, but sleet at c550m.

I pack up the tent quickly, and start to head downhill. The sleet turns to rain quite quickly, and yesterday’s snow is melting fast, becoming very slushy and skiddy. In no time at all I’m down at the river crossing, where to my delight, yesterday’s bridge (a load of stepping stones) is still looking good – although already under roughly an extra 2-3inches of water. I waste no time in getting across, and head down to the junction with Mosedale.

The wind is getting really strong now – it’s not often it’s capable of blowing me over or pushing me completely off-course with this timelapse-kit/backpacking rucksack on my back (it adds an extra 25+kg to my weight!) But today it’s being a complete bully, blowing me all over the place and knocking me over frequently, even on what should be the lee slope. 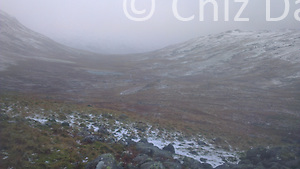 Mosedale was meant to be my “easy retreat” option – even though it would require walking up and over the Hardknott pass on the road. But the wind and incredible boggyness makes it anything but. I lose count of the number of times I’m blown over. As I reach the col, I feel like I’m in one of those wind-tunnels they use to test jet-engines and race-cars with. I can barely stand, and it’s going to be into the wind all the way now. The bog becomes part-lake and I begin to edge up the hillside. 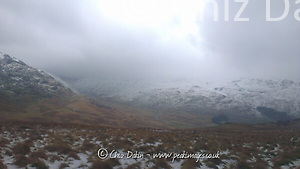 I make a calculated decision to take a “short-cut” across the corner of Mosedale – dropping down to the road much higher up. Of course, I’d forgotten the deep ravine created by the stream running parallel to the road. It probably would have been a lot quicker wading through the bog on the “main path” (which is anything but) to the road, than the windswept hunt for any safe route down from above the crags of Hardknott/Border End. Eventually I find the descent route to the summit of the pass – covered in snow it looks very different to when I’ve ascended it in the dark and rain on previous occaisions. And it’s nearly dark now. 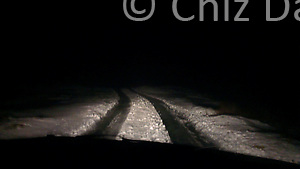 Definitely time for a drink at the Woolpack, before escaping back over the passes to a nice warm bed before a meeting the next day.

Although the Hardknott pass was just very wet, the Wrynose was a little more awkward… Fortunately it was (just) passable…