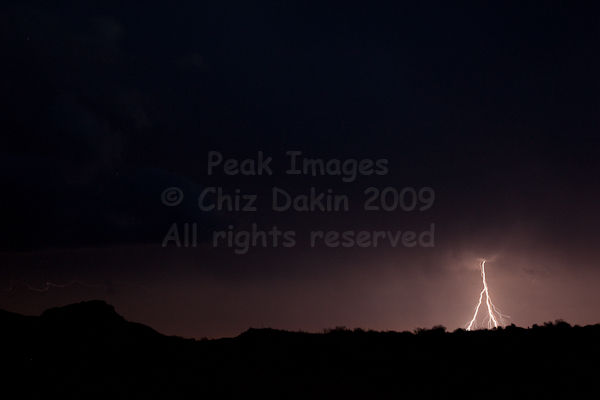 In the end I couldn’t go past Quijadas National Park at nearly sunset without trying to get some pictures and see the red rocks glowing at sunset. It was a bit later than I’d intended by the time I got there, as it had taken longer than I’d anticipated from San Juan.

But it wasn’t to be – my plans were scuppered by a large bank of cloud moving in from the west – which rapidly completely obscured the sun for the critical time of day where the rocks glow red – in a similar way to America’s Bryce Canon etc. Not good for awesome photographs of an entire range of rocks glowing bright red at sunset 🙁

But the cloud had a hidden bonus – it was the start of a very impressive thunderstorm! I had been planning to camp in the National Park, but advice from the friendly park wardens (one speaks quite good English, the other was able to understand most of my broken Spanish!) suggested that the rain can be very heavy. He wasn’t wrong – that was the heaviest rain I have ever seen, and I’m very glad I decided to push on to San Luis that night.

The thunderstorm was very impressive – and it took a long time to cover the first 5km, as I kept being tempted to try and take pictures of the amazing lightening. It wasn’t really dark enough at first, I knew that, but when faced with such conditions you still have to try even when you know its unlikely to work!

Roughly 30mins out of Quijadas National Park, the rain began, and the thunderstorm got going in earnest. Lightening flashes were running at roughly 5-20 per second at its peak, from every direction, some as forked lightening, some just as daylight bright flashes within the clouds.

And the rain. TOrrential doesn’t begin to describe it. Something more like a mile-wide fireman’s hose on full blast comes closer. It was so heavy that driving became imposssible – at it’s worst you just simply couldn’t see even if the road was flooded or not – or where it was – visibility had become that low! The wind was pretty impressive too – rocking the car quite violently at times. So I pulled over towards where I hoped the edge of the road was, and hoped that any traffic trying to continue would see my hazard lights in time!

Eventually the rain eased slightly, and a lorry came along, fairly slowly. He was obviously able to see more than me, but by following his tail lights it was possible to make slow progress. At one point when the rain increased briefly I began to lose him – I think he must have realised I was blind without his lights, as he slowed down so I could catch up again – very friendly and helpful!

And as for that orange light – it stopped when the car was down to running on vapours roughly 20km from San Luis. Good thing too, my phone had no access to signal in San Luis and at half past midnight I was amazed to find a petrol station open. Stopped in the Quijadas hostel. I think I was the only one there that night – it felt very much an old somewhat rundown and very institutional hostel, but it was a bed for the night at a time when I thought I might have been sleeping in the back of the car!

One thought on “Thundering through Quijadas National Park”