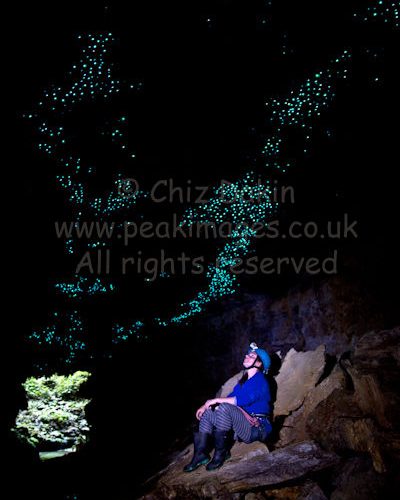 Home » Photography » Greenglow – glow-worm photography and caving
When I reached Waitomo, I was really looking forward to taking photos of glow-worms in the world-famous caves there. But it nearly wasn’t to be… It seems the main caves have decided that in the rush to get as many (ticket-buying) folks through the system as possible, taking of pix is no longer allowed in the glow-worm caves themselves 🙁 (But you are allowed to purchase your mugshot from them afterwards!)

A cynical view? Mebbe, but fortunately there is an answer. Paul from Greenglow adventures runs the antidote to the mass-market get as many folks through an expensive tour as fast as possible approach. He only takes one group a day, even if that group is one solitary photographer! (although the solitary photographer does have to pay his minimum 2person charge) And most importantly, photography is not only allowed, but actively encouraged!

If you want to spend all your time underground creating fantastic photos (he even provides a couple of flashguns and good knowledge of their use in caving photography), that’s not a problem – it’s your (small) group, so you set the pace and he enables a fantastic experience. Want to spend all your time abseiling without waiting for the rest of a large group – I get the impression that wouldn’t be a problem either.

I feel very fortunate to have been told about his business from the B&B I ended up staying in (Waitomo Caves Lodge – also a really nice place, though more expensive than I’d normally want to pay – there wasn’t a lot of options when I arrived in the evening in Waitomo, but it worked out well in the end). Despite only phoning Paul first thing in the morning he managed to fit my trip in that day with an afternoon-evening special.

So after a quick visit to the Natural Arch in Waitomo to fill-in time in the morning (well worth a visit to this FREE cave – and glow-worms can also be seen here in the evening!), the afternoon started with putting up my tent in the basic but free campsite Paul can offer to his customers (near, but not next to his house!).

Then, after sorting out some thermals of the right size, wellies and harness for me, a brief bit of hedgehog medicine as we discover that Prickles (a baby hedgehog that’s kind of adopted Paul’s family over the last couple of weeks), has suffered at the wings of egg-laying Australian green flies. He’s got covered in their eggs, and will be eaten alive if we can’t get rid of them before they hatch:( We’re not sure what we can do to help him, but try bathing him in some diluted Dettol in the hope that will kill the eggs, but not harm Prickles. (NB DON’T try this – we now realise that that hedgehogs and even very diluted Dettol appear to be a bad combination 🙁 )

Then we drive all of 5 mins to a nearby farmers field – very convenient! The trip starts with a 40m or so abseil – it feels very strange using the cavers version of a descender – quite a different bit of kit, but it offers more flexible options for speed of descent. I get very sidetracked by some amazing green-coloured water drops on some vegetation over the stream, before realising that it’s an impossible pic I’m trying to take without flash – freezing a water drop on vegetation with flowing water in the background! That’ll need serious flash set-up and we’re supposed to be doing cave photography not getting side-tracked this early!

The entrances to caves seem to provide the best opportunities for photography – especially as it gets towards dusk. The lower light levels allow the green glow (where Paul’s co name comes from, not from the glowing cave-worms that everyone assumes it’s from!) of the vegetation to expose well against the silhouettes of the cave entrances, and painting with flash-gun lights allows us to pick out interesting stalactites, rocks, or even ourselves in the foreground.

We carry on to take pix of glow-worms forming a milky-way effect overhead, stalactites and have a second abseil. Abseiling in caves seems much easier than on sea-cliffs – it’s much harder to see the bottom, so seems less scary! We’d hoped to get some pix of the glow-worms “fishing” for insects, but sadly they’re not playing well for photos tonight. Then we crawled through a narrow passage to get to a lake with amazing reflections. Rather muddy, but quite fun!

Finally we finish off with a cave-full of stalactites, including one that looks like a carrot on steroids, and a few minutes sitting in silence under the glow-worms. It was midnight by the time we returned, fairly muddy but with some great images in the bag, and having had a lot of fun exploring. Sadly we learned on our return that Prickles (the baby hedgehog) had died. That was a sad end to the day, but the memories (and photos!) of so many glow-worms in the caves will remain with me for a long while to come.