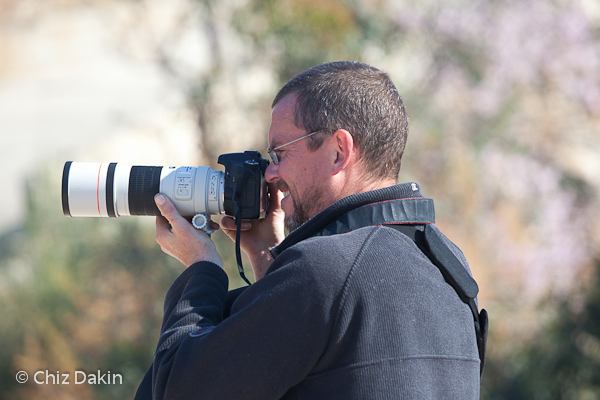 This was intended to be my winter recce trip, to see how locations changed in winter time, prior to running a workshop later on in the year. But then Kiersten of Spanish Highs contacted me to say a couple of local folks (including Ian of Birdwatch Alpujarras, who’d recently updated his camera equipment) were asking if I would run a couple of days tuition while I was out there, and could she have a refresher course to remind her of all the techniques she’d learned the previous November too…

The day dawned bright and sunny – a good start for the course. I had a brief wander down to Lanjaron Castle, which I planned to use for the day’s activities, as we had one participant who wasn’t a keen walker, and it provides a range of views and subjects that’s great for teaching both aperture priority and shutter priority techniques. Thinking how cold it was the previous night, I thought I’d better put several layers on, but all too soon I was sweating in the beautifully warm sun – there was a temperature gradient of roughly 10C between shade and sun! The location looked similar to how I remembered it from previous visits, but a new path has been created at the top, which seems to lead up to a park with small stream near the western end of the village. The view from the top of the castle ruins back to the village was also great at this time in the morning.

Having satisfied myself that nothing major had changed, it was then off to the El Volante cafe bar at the eastern end of the village to meet my clients for a quick coffee and introduction. Sadly I then discovered that one had dropped out – of course it would be the one who didn’t want to walk, which had limited my choice of location – but we still had two happy smiling faces looking eager to learn!

We briefly discussed what each of them wanted to get out of the day, where their current photographic skills were at and spent a couple of minutes covering basic details about how the camera decides what to set as the correct exposure (when left to its own devices) and what three things we could take control over in this process; it was then time to finish off the coffee and head back down to the castle, just 10mins walk away.

There’s a great wide flat space at the top, with benches around the edges, so this was a great place to chat about aperture – how taking control over this hole in the lens that lets light through to the sensor enables creative control over the look of the image. I then set them various tasks and exercises to investigate and learn how taking control over the aperture (aperture priority) can alter the effect of the image, and having reviewed the results with them at each stage, it was time to let them loose to play with choosing what aperture to use on their choice of images in the area.

All too soon it was time to break for lunch, and we repaired to the Health Bar in the centre of Lanjaron. Some of us stuck to the Fanta Limons, others had beer, but the temptation of the quesadilla (a kind of double tortilla with tomato and cheese inside) was too great! Only 3 Euros for a plate filling portion, it was a great value and fairly healthy lunchtime snack. The home-made chips tasted pretty good too, although probably were rather less healthy!

Next blog: the afternoon session…