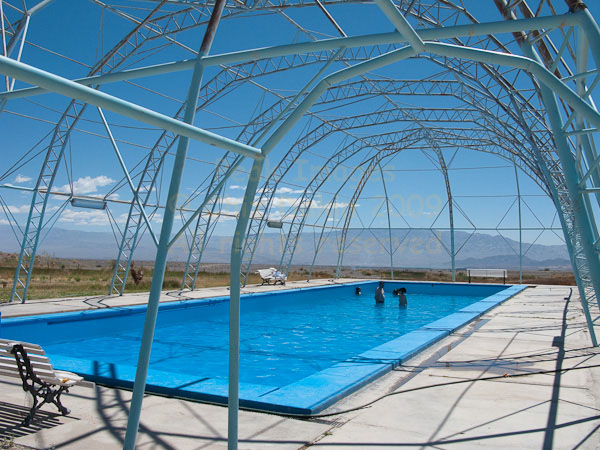 Home » Photography » Across the Andes to Mendoza, Argentina

Three flights in one go was a looooong way, but I reached Mendoza in Argentina eventually. The flight out from Heathrow to Sao Paolo was very uneventful – being a red-eye it was best just to try and sleep as much as possible to help the bodyclock adjust as much as it can.

Quick transfer to the Sao Paolo to Santiago flight, no nasty customs or immigration to do just for transiting the airport here 🙂 But there was a minor sting in the tail – with less than an hour to spare between landing and take-off we had to do a terminal change. Fortunately, also asking the way was a woman originally from Santiago, who’s been living in London for the last 23 years – so she spoke fluent Spanish. Which was a great help as the gate number changed along the way from 16 to 20 to 25 in the end, and even the British pilots by one of the gates weren’t aware of the second terminal! (Fortunately the gate staff were!)

Crossing the Andes on the flight from Sao Paolo to Santiago

The highlight of that flight was definitely near the end – crossing the Andes. The landscape had been amazingly flat all the way from Sao Paolo until shortly before the Andes. But the aerial view of Aconcagua and the surrounding mountains was awesome.

One tip to make sure you get the best view – sit on the right hand side of the plane heading towards Santiago. Contrary to some guidebooks, the plane doesn’t normally circle Aconcagua before landing at Santiago airport, but you may get lucky if there’s a queue of planes for landing! (We didn’t, but the aerial views of Aconcagua as we flew past were still spectacular). The “normal” oddity of mountain weather was well and truly in operation – as soon as we crossed the divide into Chile, the cloud obscured most of the views until we descended below it, having been completely clear and sunny on the Argentinian side.

I’d originally considered taking the bus back over the Andes to Mendoza, my intended destination, but the way the flights worked, I wouldn’t leave ’til mid-late afternoon. And as that apparently has no views due to cloud and darkness by the time you reach the interesting section, it seemed not such a good use of limited time in the area. So on to the third flight of the day – across the Andes from Santiago to Mendoza. The views were less good this direction, partly due to having to get through the cloud before you could look back at the views, and partly there seemed to be more cloud. Also I was in a right-hand-side-of-the-plane seat again, which wasn’t so good for aerial views of Aconcagua (ie read no view!) in this direction, though Tupungato did briefly poke it’s head though the cloud on my side.

Car rental with Sixt easily sorted at Mendoza airport, then onto the Hostal Alamo. It was a bit out of town, some 7-8 blocks from the centre, which was good for being a little bit quiet and having cost-free street parking reasonably close to the hostel. Very useful for being right next to the Carrefour supermarket too. Dario and Luis the hostal staff made me feel very welcome, despite the hostel seeming very quiet when I arrived. (I thought I had an 8 bed dorm to myself – but the Santiago-Mendoza bus had been delayed by an oil tanker that had overturned on the Andes pass, and nearly didn’t make it through. So waking up this morning I found a couple of folks had arrived at 2:30am – some 7 hours later than scheduled – they must have been thankful for the 24hr reception at the hostal Alamo!