Home » Fitness Training » Expedition Fitness Training – a home made kettlebell and other weird words!
UPDATE – Do NOT try this exercise if you have any niggling (or worse) injuries to the lower back… You will likely end up just keeping your physio in business! It is far more powerful than you’d expect and the leverage effect of the swing can really aggravate back injuries. (I got off lightly with only a minor setback (I was careful not to start too quick on this one), but I hear others haven’t been so lucky…)

When embarking on a goal that’s significantly more than you’ve done before training becomes important. But if you’re like me, fitness training isn’t something that comes naturally. Either I’m out there enjoying the outdoors and it just happens along the way, or it’s really tedious and potentially expensive. (You may already have guessed that I’m not a fan of gym memberships that cost a lot and lock you into a year or more at a time!).

But when taking on a challenge, you sometimes have to accept a bit of tedium in preparation to be able to give the challenge a good shot at success.

I must admit when a friend (and team member on the expedition) posted this blog article by Amar Dev Singh as advice on getting fit I hit a familiar brick wall. I didn’t understand half the terms used nor did I really have any enthusiasm for something that looked as if it would take a lot of tedious effort, and potentially require an expensive gym membership as well.

And initially rejected it quite strongly without reading it properly… Persuasion from Kiersten got me to re-read it, and I think I’m glad I did. I still don’t understand half the terms, but this kettlebell thing is potentially a useful idea for someone like me who needs to up their core fitness in a hurry. Especially as it targets all of speed uphill, endurance and weight carrying ability in one go – although pure simple stubbornness does get me further in endurance than I have any real right to! 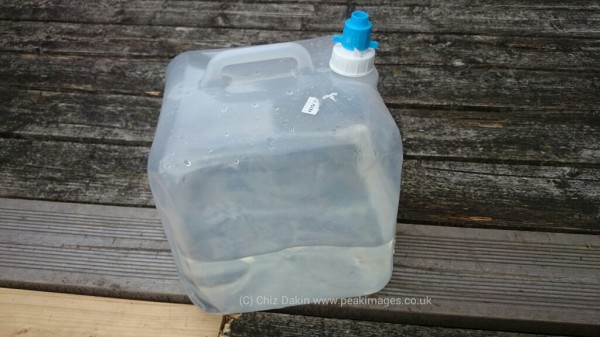 Then there was the awkward issue of “what size kettlebell”? As I’m still recovering from injury, the last thing I want to do is overdo it, which means starting more gently than most.

But equally, the last thing I want to do is spend lots of money on a range of fitness gear which I may only use for a few days or weeks, before moving onto a heavier version. (They’re “only” £20 each, but times by several weights, it all adds up. And to someone that doesn’t do “conventional fitness training” that’s a big chunk of money that could be spent on outdoors gear or activities!)

Some head scratching then followed, before a lightbulb moment. My husband has long jeered at my 15l water carrier (which I find very useful when wildcamping for photos (with the car as transport between roadhead-bases) or if the campervan’s water tank isn’t smelling so good). It’s not too far off the shape of a traditional kettlebell, and has the bonus of being able to change its weight (by adding more or less water). The downsides – well two. The handle’s not great and that changeable weight is very sloshy inside.

First trial – I followed the advice of repeating groups of swings of 10, 15 then 25 with 30-60 seconds gap between each group (and a few stretches in between). But didn’t manage the full 500 that’s apparently the ideal quantity. I stopped at 150. And boy am I glad I did. I may not have perfect technique (Can anyone tell me what a “silverback position” is? Other than apparently the “starting position” you’re supposed to adopt). But this is a seriously effective exercise. Too effective in fact! I was briefly out of breath at the end of 150, and my legs were noticing the effort. Later on my back became quite sore, and three days later has just about recovered.

Result? Well far too soon to really know, but I’d advise anyone new to this to take it extremely gently, especially if returning from injury – it’s a remarkably powerful exercise! But done in moderation could be very helpful to overall fitness.