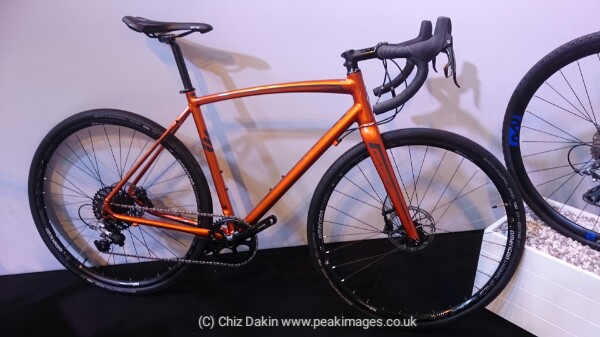 Home » Cycling » Gravel Bikes – and ponderings on whether the cycling industry is doing too well at marketing the extemes?
As I return from the Cycle Show 2015 I have very mixed thoughts…. Chatting to folks there and looking around it certainly seems to have been very successful… For some… 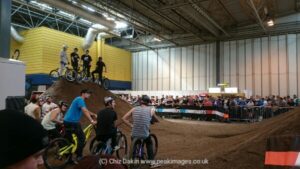 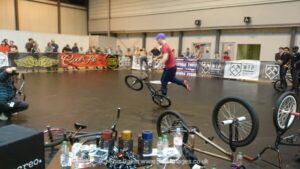 It’s the first time I’ve been to this show, so I wasn’t entirely sure what to expect. Some of the stereotypes I feared might be there, were indeed loud and present. The pro “event” areas were indeed all filled exclusively with male competitors… (Come on, I know the ones I saw were BMX and dirt bike riding, but please don’t try and tell me there are no female pro riders….!) And a very high percentage of those visiting the show seemed to be male… Chicken, egg? (Not that I have anything against male cyclists, just women are half the human race and I don’t believe we’re still less than 5% of the cycling population, so where were the rest of us…?)

But the triathlon “have a go on a miniature indoor circuit” area was busy with kids of kids of all ages, and surprisingly nearly all those playing at the time I passed were girls. Which bodes well – for the future of triathlon at least.

Then there were the bikes. At first I wondered if the show was aiming exclusively for the pro road-only raceing fraternity. Oh hang on, there are some seriously fat tyre bikes too. 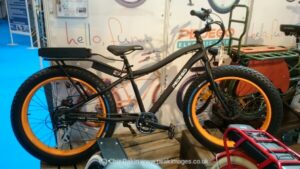 Actually I was quite intruiged by this one, which was very unusual – the hugely wide tyres looked fantastic fun for off-road downhills, but adding an electric motor to it counters the real issue with such downhill-oriented bikes – which are really not at all optimised for going back uphill on!

So both stereotypes are well catered for, both the “100miles on A roads before breakfast, clad entirely in club or pro-like sponsored lycra” gang and the “hurl yourself off a mountain, the rougher, tougher and more suicidal the mud, rocks and gradients in descent the better” gang.

Sorry, I sound really cynical here. It’s just that those are the two extremes that seem to feature heavily in cycling magazines, with little else seeming to get a look in. Mere mortals that just enjoy being out riding middle length distances seem very hard to find in the cycling press… Is that how things really are? (From what I see around me in Derbyshire, I really find it hard to believe) Or just a sign of how successful the manufacturers are at convincing everyone to have a specialised bike for each sort of cycling they do (the n+1 rule). And hence, forcing most folks into whichever variety of cycling they’ve bought their first bike for, as it’s less good at the rest and most of us can’t really afford more than one? Many riders I see locally in Derbyshire do seem to stick to quiet lanes and tarmac/smoothish cycle tracks as their road bike doesn’t really like going off road – or have a mountain style bike that covers all terrain well, but they don’t have any interest in joining the 100 miles a day club. But I guess there are a substantial number of club road racers too…

But there were other bikes there, if you looked hard enough. There was a sizeable e-bikes village. Although some might regard them as being the zimmer frame of cycling, they are fantastic for those that are beginning to struggle with the effort of ordinary cycling, but don’t want to give it up completely (or are taking up cycling for the first time late in life). And Trek’s motto of

was spot on. “More people on more bikes more often” requires bikes to be fun to ride, and one of the key things on that is gears that are suited to the terrain (why are road bikes so highly geared? It’s always puzzled me how many folks end up having to dismount for hills, simply as they haven’t got a low enough “road” gear, when MTB gears will still get you up to a good speed on road as well as up those pesky steep hills…)

And as I started to look closer, I began to see there are several other bikes hiding among the race-ready road bikes. One type that I’ve been half thinking about getting myself is a cyclocross bike. Why? Because cycling magazines seem to only want extremes of road cycling or MTB. And I’ll never be an extreme MTBer (although I enjoy the easier end of that). That said, mid-range road cycling and cycle touring (eg 30-70 miles a day) is well within my normal capabilities. But having an obviously MTB-oriented bike (it’s actually an endurance touring bike, a Thorn Raven Catalyst with Rohloff hub, and I love it to bits!) isn’t helpful. It seems I’m going to struggle to break into the cycling magazine article market if the bike “looks” wrong. I can’t say I’m happy about the idea of changing my bike to meet others photo desires… But if I’m going to consider that, then the last thing I want to do is lose the ability to go off-road at all without having to change bikes.

I had been assuming that a cyclo-cross bike might be the best compromise of a “road” bike that isn’t restricted to just roads. Until I had a really useful chat with the folks from Raleigh, and they told me about “gravel” bikes. 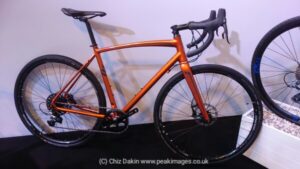 The differences? Cyclo-cross bikes are apparently designed for an hours thrashing around a muddy field, with twitchy geometry designed to help pick a route between tree trunks and plenty of space and features to deal with the inevitable clogging of mud. Gravel bikes are designed for all day riding on a mix of country lanes, bridleways and forest tracks. They can take panniers (ie good for touring) and have a bit more relaxed geometry to make them more friendly for most mortals looking for a good but not overly twitchy response to off-road obstacles.

And they’re light. Seriously light! 9.5kg light if you must know, but they’re so easy to lift up with one hand! About the only thing I really dislike about my Thorn/Rohloff bike is its weight… Which is over 15kg… And the difference in the strength required when lifting them feels much greater than that. 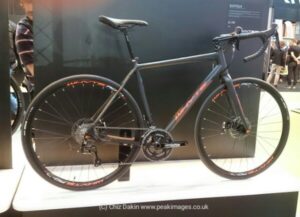 There were other “cross” or “gravel” type bikes too. I was very tempted by a few of the Whyte bikes as well, until I discovered that most have very limited options for attaching pannier or even mudguards… (C’mon folks – these are supposed to be off-road/touring capable bikes… aren’t they?) The Suffolk cross being a noteable exception, which does have braze-ons for panniers – yay! I also should have gone back to the Trek stand – their 920 adventure tourer also looks an interesting “road” ish bike that’s more than capable of the rough stuff too.

But I’m left wondering… Am I really the only person out there that just wants to enjoy riding? Without it “having” to be extreme? And who doesn’t want to be restricted to tarmac by my bike – but wants to ride nice off-road sections in the same route as that which uses quiet roads? Am I the only person that hates A roads, and dislikes “sponsor-covered” lycra. Or will never jump off 3m gnarly rocky drop-offs? Am I really that unsual?

Or have the cycling manufacturers done too good a job at selling us road racing and extreme MTB bikes? With every other niche requiring a seperate bike, but those niches being too small for mainstream media coverage?

Or it is really the case that everyone else only wants the two extremes of road-racing and as rough, muddy, technical and extreme as possible off-road riding? And I’m just the odd one out? I find it hard to believe, but I am left wondering about that…?