This article is a simple guide to improving your flower photography. I’ve used snowdrops as the example throughout as they have particularly awkward characteristics, but several of the points mentioned are relevant to any sort of macro flower photography.

Problem #1 – How do I avoid avoiding overexposing white petals?

The simplest trick to this is to use centre-spot metering in your camera, and point the centre of the frame at the snowdrop while you freeze the exposure values with exposure lock (typically done by either half pressing the shutter button, or sometimes with a dedicated * or AE-L button) before moving the camera to recompose the image to the view you want.

However, this can be a pain when using the camera on a tripod, or even hand-holding if it locks the focus at the same time. This is because…

Problem #2 – How do I avoid the key part of the flower moving out of focus when recomposing an image? 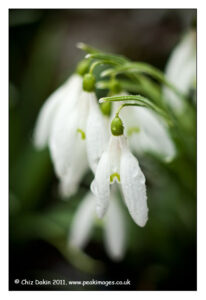 Snowdrops – only the front flower is in sharp focus

Macro flower photography requires very accurate focusing, and movement of even a few millimeters can change the part of the image in pin-sharp focus to outright not-in-focus. And macro photography probably suffers more from this effect of small changes of distance changing the focus point than any other type of photography.

In practice, the easiest way to get both the exposure and focus right is to use manual settings. Set the camera into Manual mode (often this is M on the circular dial, sometimes it’s buried away in menu settings). Then take a couple of test shots to work out the correct exposure settings, then set the aperture and shutter speed accordingly. Use the camera mounted on a tripod to prevent photographer-motion (aka camera shake) affecting the focus. Then use the liveview screen to magnify the image to give best possible sharpness on the right area when setting the focus manually. And keep the ISO on the lowest value possible in the circumstances to reduce noise in the image – unless of course you’re wanting a very grainy image!

Of course, if the light changes, you will need to re-experiment to find the correct exposure values for aperture and shutter speed, but it avoids the issue of needing to set up the camera to lock focus and exposure separately (which some camera, particularly compacts, simply won’t let you do!)

Problem #3 – How do I cope with snowdrops that hide in dark corners?

Snowdrops have a tendency of hiding in dark corners. That can be helpful sometimes (it means harsh sunlight is less likely to fall on them, making it easier to avoid over-exposing their white flowers) But less light means that macro flower photography is harder to do hand-hold, as there’s less light. Whether you see it as an advantage or not, hand-holding the camera for macro photography is best avoided anyhow. The amount of the image in critical focus is so narrow that hand-held camera movement can unintentionally change the point of focus from where you intended. So the macro flower photographer has two choices – either add in more light (with a reflector, or flashgun or two) or if it’s incredibly calm (in a greenhouse perhaps!) shoot with a longer exposure. (Although you can fairly much guarantee that even if there isn’t a hint of any wind when you find the flowers, by the time you’ve set up the camera it will be blowing half-way to a gale!)

Such is life, but Saturday fortunately had very calm weather, and I was able to get some shots when there really wasn’t a breath of wind to move the petals around. Thus avoiding having to use flash. The downside (there always is one!) – it was raining. But that was solved with a large umbrella and the raindrops on the petals were quite pleasing!

If you do use flash, ensure that it is positioned sufficiently far away not to overpower the foreground, and over-expose those delicate white petals. Placing greaseproof or tracing paper over the flash-head is a cheap and simple way of reducing the power of the flash if neccessary.

Problem #4 – How do I get very small flowers like snowdrops to fill the frame? 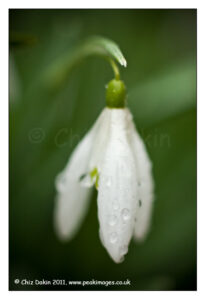 Small flowers like snowdrops are difficult subject to get close enough to to fill the frame with. I’ve tried in years gone by to capture snowdrops with just a standard 28-105 lens, and been very disappointed with the results. I’ve later tried with a 100-400 lens, only to not be able to focus sufficiently close enough to do any better than the 24-105 (which replaced my 28-105 a few years ago). Finally I’ve even tried close-up filters to get closer, but never really been happy with their focusing capabilities (or not!). So what’s the answer?

This year I have two solutions. Either a 100-400mm lens – IF an extension tube is added to it. This allows the camera to get much closer, sufficient to let the flower reasonably fill the frame. Alternatively, the best solution is a perhaps the 100mm macro lens – just make sure the focus limiting switch isn’t switched on, or you’ll be wondering why you can’t get close enough focus to fill the frame! I found the 100mm macro was the best in this instance, but in other circumstances, the 100-400 could do nearly as well.

Problem #5 -How do I get a good composition when snowdrops tend to group together in awkward clumps?

This is a difficult one to do much about, it’s how they naturally grow! However, being able to get close with a lens that gives very shallow depth-of-field (such as a macro lens) will make it much easier to focus out distracting elements of the composition. But look around too – occasionally you can find one snowdrop separate from the main group, and that makes it a lot easier to focus out everything but the flower itself.