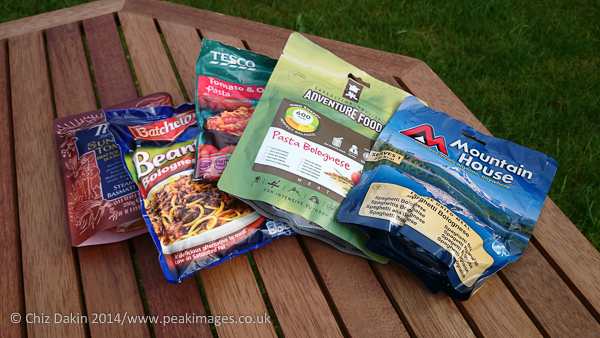 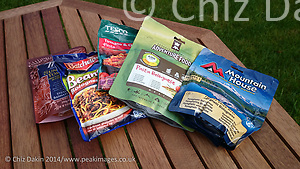 Food is one of the most important things on an expedition. Having something tasty and filling to look forward to can make the effort required to put one foot in front of the other in the face of howling winds just that little bit easier. Conversely, knowing that you’ve got something tasteless, or inadequate facing you for dinner can sap whatever remaining strength you have. 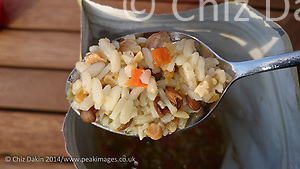 But few of us can manage to carry and cook the best cut of steak, or fillet of fish (or nut casserole) when on the mountains. Especially on a multiday trek where you have to carry all your supplies on your own back, and there’s no option for resupply. Fresh food of any variety, let alone gourmet specials, is just too heavy and perishable. If you’re really lucky, you might manage to take some for the first night or two, but beyond that strength, crushproof space and cold enough conditions to keep things fresh are usually a problem.

So it’s not surprising that there’s a whole bewildering range of dehydrated food out there. And a wide amount of variation between different versions in taste, quality of ingredients, calorie content and flavours.

Everyone has different tastes so I wasn’t going to mention individual options, but why not? You can always disagree with my choices, especially if you happen to hate the main ingredient. Regardless, the main things I’m looking for in expedition camping food (particularly for the Patagonian trek, but not exclusively) include.

It amazes me just how variable this is, and how short on calories some items are. If you think that a sedentary adult in “office warmth” needs 2000-2500 calories a day, then a hard-walking expeditioner in near-freezing or colder conditions clearly needs substantially more. Perhaps double that. And the meal at the end of the day may well be the main source of calories, as it’s likely you won’t stop properly for “lunch” and breakfast may come too early, or in too much of a rush, to get much down before moving on each day. Many supermarket pasta/noodle meals tend to be too low in calories on their own for a main meal on a multi-day trip. (Most are really designed to be eaten as part of a main meal, not the whole thing). Cous cous similarly is moderately low in calories on its own for a main meal (typically about 400 cals per pack), but may make a great breakfast or part of a meal if you’re willing to do more in the way of cooking.

My personal minimum for a main meal is 600 calories, and more than that is better. But look at every packet, as even within a single manufacturer’s range, the calorie content can vary wildly. 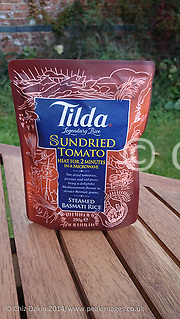 Some “expedition” foods aren’t really dehydrated and weigh signficantly more. For a short trip or one where others (or even pack animals) are carrying your kit that may not matter. For trips where you carry everything, they’re just too heavy. (And I’ve not yet found any that taste better than the dehydrated packs!)

On the other hand, some hydrated rice pouches, such as those from Tilda, are very tasty and filling. On an overnight or short trip these are a mainstay of my main meal, usually with precooked chicken (if the temperature isn’t too high to make that unsafe) and a small amount of red wine (to aid cooking… honest 😉 ) 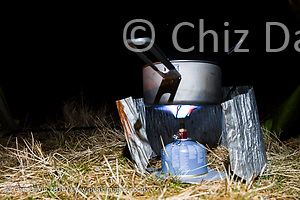 Tinned food is too heavy and leaves behind awkward empty jagged tins. Excess packaging on expedition food is rarley an issue these days and many simply require you to add water to the package and allow to rehydrate. But experiment beforehand, as often the levels suggested are inaccurate, leading to pasta soup!

Anything requiring “proper” cooking in a saucepan will be more timeconsuming and more hassle to clean up afterwards. (But may taste better, depending on recipe and cooking ability!)

Some of the newer “mug on a cylinder” types of stoves such as the Jetboil series, may find “proper” cooking more awkward than just water boiling. 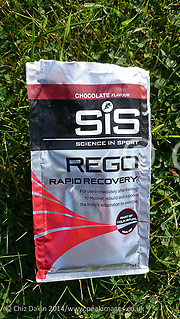 Expeditions tend to push most of us physically compared to what we’re used to. Even with training, that usually means we’re building muscle as we go. For that protein is essential. I’ve found in the past that after just 4 days of cycle touring (with easy resupply) I need a protein breakfast. Either that, or I simply don’t function well. Meat is an obvious source of protein, but don’t overlook nut based items (typically cashew and peanut) or leguminous veg-based items (lentils, peas and beans). The downside of lentils on their own – they require a lot of cooking time (they’re unsafe to eat raw). And it’s very hard to find dehydrated items based on them – although this is getting easier.

I’m currently investigating the SIS rego range of after-exercise protein drinks…. these may be a useful addition for later on in the trip.

Expedition foods with a bit of veg in their mix may be a good option (much as I personally will avoid anything with peas or mushrooms in it!) although how much they really provide in the way of nutrients after cooking and dehydration isn’t at all clear to me. But realistically the majority of “veg” is likely to come from trail snacks.

If you’re eating rehydrated meat-based meals with limited veg for several days on the trot, you may find adding a multivitamin useful while on expedition, but see snacks below.

One of the best ways I’ve found of replacing sweated out salt is eating salted nuts. (Salted crisps just turn to shrapnel after a day in the sack…) My personal favourite are salted cashew nuts from Costco, as they’re good and salty and come in an economical 1kg tub which can be decanted into ziplock bags for travel. But any economy sized bag of salted nuts will do. Do decant into ziplock bags though, as resealing the pack is often ineffective against atmospheric moisture.

Electrolyte tablets (not to be confused with after-exercise protein drinks mentioned above) such as Zero, SIS, Nuun are also useful for adding to drinking water – either as an end-of-day salt replacement, or as you go, depending on personal preference. Most of these have zero calories, which is normally good, although on expedition it may be worth looking for those with calories as you will be using more than you’re consuming! 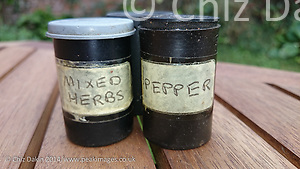 Adding mixed herbs, curry or chilli powder, salt, pepper, spices or even nuts and dried fruit can be a way of adding variety to the same base meal each night.

Herbs, spices and seasoning can easily be carried in small plastic bottles or ziplock bags (an old-school film canister can be useful for those which you might use a reasonable quantity of, eg mixed herbs). Dried fruit and nuts are heavier and on some trips will be too much of a luxury, but if they’re an option, can be well worth adding. Sometimes that simply means adding a few extra to those you’d carry as trail food for during the day.

Dried fruit is a good option if you can manage the weight. Likewise malt loaf (which is particularly good in drier climates, especially if staying hydrated is hard enough that you begin to lose your appetitie). Salted nuts and seeds, and muesli bars tend to be lower in weight for the calories they provide. I also find Jelly Babies fantastic for an instant sugar hit when getting knackered and chocolate excellent when getting cold and tired. But Jelly Belly Sports Beans may be more weight-economical than Jelly Babies – the jury’s still out on that for me, as they don’t taste as good. That might mean I don’t munch through them so quickly though!

So far this is Expedition Foods 800kcal per (larger) pack range, which taste better than most. Although the Chicken Tikka can be quite spicy hot, that’s a good thing after a few days on expedition! Also avaialble in 1000kcal packs.