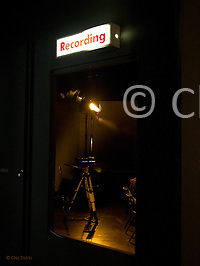 Peering into the filmset of the Derby Soap Opera

I’ve just had a very hectic couple of days working as a camera operator on the Derby Soap Opera filmset, and it’s been a fantastic experience. Very very different to the sort of stuff I usually do – as far as you can get really from either the sort of photography or video work that I’ve done so far. It’s:

And I’m still wondering slightly how I managed to talk my way into one of the camera operator’s (CO) roles so late on in the process (scriptwriting and filming started three months ago), especially in the week before the serious movie filming takes place, but very glad to get involved, as this is experience that money can’t buy.

The way it seems to work is that Marinella Senatore (the Italian director) brings across a few key people (Ramon the acting trainer and co-Director, Javier the sound engineer and Constantine the principle actor in particular) then gets as much of a community involved as possible, effectively making a mass-participation film. So all the co-directors, script-writers, camera crew, and actors are volunteers from the community, and apparently over 15,000 people have been involved from Derby so far – I believe mostly as potential actors or dancers in the casting sessions. 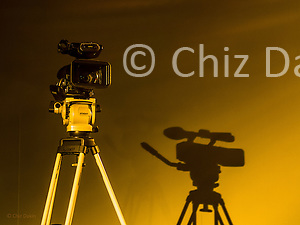 The camcorder I was using

I was involved with recording much of the 2nd public castings (for acting roles of secondary characters and dancing roles) over the weekend and it was quite daunting at first. Yes, I’ve shot the footage for my own doco already (“In Shackleton’s footsteps“, still awaiting editing), and spent a fair bit of the last 18months getting to know the basics and more advanced concepts of movie-making, but it’s actually another thing entirely to be handed a very unfamiliar camcorder and told to get on with it on a film set! Let alone have a microphone of the local radio station thrust into my face within 10mins of arriving on set (Andy Potter of Radio Derby had been sent to interview us and try out as an actor himself – he looked almost as nervous about that as some of us were about being interviewed on radio!)

But back to unfamiliar camcorders, and fortunately, Paul (the other camera operator on set) has been around the set since the beginning and has figured out some of the basics of the controls already.

First of all we clean the tape heads…. Err hang on, we’re using tape??? Oooh, camcorders really are in the stone age still compared to DSLRs aren’t they! Ok…, this is going to take some adjustment, so concentrate Chiz, a lot of this is going to be new to you…

We label a new tape and drop it in, before setting “bars”. These are like the old test card that used to appear in breaks in transmission on TV – we record those for a few seconds. It’s a bit like shooting a white card for later post-production on a photographic studio shoot. Then Marinella comes over and reminds us of the shutter speed she wants. I’m a bit puzzled by it at the moment as it seems to be different to the 1/50s that the standard 180degree rule I’ve come across would suggest for European broadcast, but I suspect it may have something to do with the dancing that will feature in a fair bit of the movie later on. Hopefully all will become clearer in a bit. 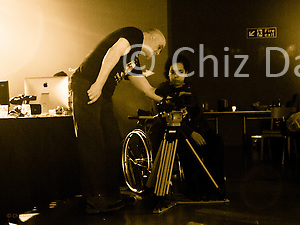 Paul in tuition mode - teaching Jenny some of the camcorder controls

So that leaves gain which seems to be measured in db… (Camera senstivity measured as a noise??? Very strange, we leave that alone for the moment, fingers crossed it’s already set for us, as it’s not being very intelligible and we don’t want to break it) and iris to set the exposure with. Only the iris control is very well hidden. Doh! Fortunately Marinella can show me where it is on this camera, and then I’ve got that to play with – only to discover that I’m up against the zebra…

(Even if the camcorder’s new to me, I’m very glad that I already know about these film crew words for photographic terms:

as otherwise my head would be spinning far more than it is already).

Overnight I download the camera manual for something that looks similar enough to help. And discover useful things like the H,M L switch that gives 3 different pre-set levels of gain. (L for Low is the one I needed, but it had been switched to M on the camera I’d been using – that explained why it was having trouble with zebras/exposure levels in the harsh lighting). But just as usefully, I discover the inbuilt ND filters – a really nice touch – which would have been the next stage to solve the exposure problem if I’d already been on L gain. 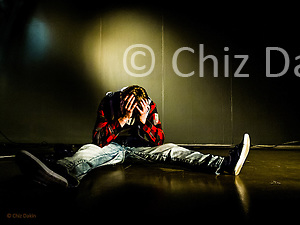 It feels a lot easier on the second day, it certainly helps being more familiar with the camera, but I’m probably also more familiar with what Marinella and Ramon want from the footage, and how the style they want (which is very different to my personal style) is achieved. And it feels like me and Paul are working much better as a team, rather than me having to ask Paul every step of the way “what does this control do, how to I do this, where do you want me to stand?” etc

Sun is a very long day – an 8am start and both me and Paul were supposed to finish at 4pm. But no-one comes to take over as CO for either of us, so we stay on. Casper (an enthusiastic helper) provides entertainment with the clapperboard and in the breaks. Not only is he quite photogenic, but being somewhat vain he’s very keen to have his picture taken – just what photographers like!

It’s very hectic in the middle of the day, just enough time to change batteries, tapes, reposition and re-level tripods etc between takes, but tails off towards 5pm. But there’s someone booked for 7pm, so we have to stay. Really glad I did though, we had an unexpected additional casting – from a guy called Stephen Vaughan Williams. He’s very unassuming, and actually looked a bit dishevelled as he appeared at the door to the set. Fortunately John (one of the Co-directors) knew him and suggested he would be very worth listening to. Boy was he right! I’m not a great fan of American crooning, but even the song he did of that genre was so powerful it make my hair stand on end. I may also have to review my opinion on poetry after listening to him too – I’ll now concede that some of it can be pretty amazing when performed well. A few songs and a couple of poems later and several of us on the crew reckoned that if Marinella doesn’t make sure he’s got a part written specially for him, she’s really missing a trick!

It’s nearly dark when I get home, but that was a couple of days that will stay with me for a while. Fingers crossed that my next task of recording actor rehearsals goes as well!