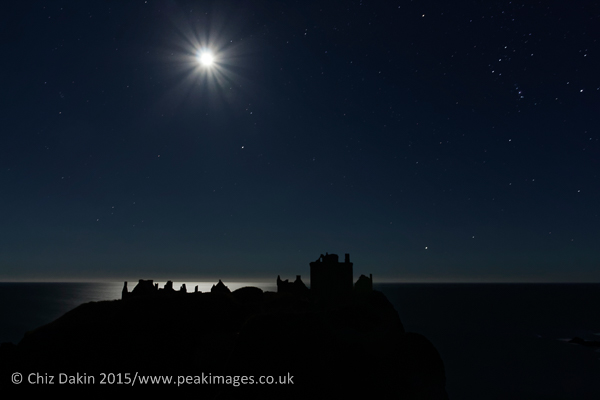 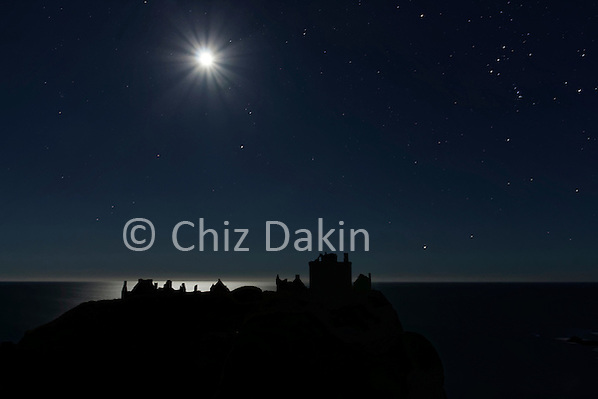 Standing on the edge of the cliffs overlooking the stark outline of Dunottar castle below, it seems so peaceful. That is, until I hear a sudden yell, and my heart suddenly starts racing violently as the two lads below run for their lives below me.

Of course, a castle like Dunottar, with its strategic location overlooking some of Scotland’s main shipping lanes, has seen its share of violence over the millenia. From Viking capture in AD900 to William Wallace’s alleged burning of captive English soliders in the recently consecrated church in 1297. A siege for the Scottish Crown Jewels and “Kings Papers” in the days of Charles II failed when the Scottish treasures were smuggled out through enemy lines, and the imprisonment of 167 “Covenanter” prisoners in 1685 lead to many deaths through disease and starvation. But I was rather hoping that tonight’s sole excitement would be the brightly coloured illumination of natural fireworks in the sky as the Aurora reached forecast storm conditions overnight.

The yells and sprinting of the lads, however, turn out to be the peak of a strange mix of excitement and fear on a rather unusual night. Earlier on, it had been the witching hour of midnight as I drove into the deserted car park of Dunottar castle. Well, I thought it was deserted, until I spotted a large white van in the opposite corner. Which was a little worrying as I’d hoped to wildcamp not too far from the castle in an effort to keep warm while I waited for the Northern Lights to appear..

It had taken much longer to get away from Edinburgh than expected, the Forth Road Bridge being temporarily closed and my initiation into the world of “satnav comes with the vehicle” having been frustrating enough with misdirections for me to switch it off and ignore it for the rest of the trip – proper maps work much better! So I’d plumped for a nearer location than originally intended.

But while the outdoors is by and large a lot safer than urban areas – particularly around typical pub closing times – car parks on the edge of urban areas at night are one of a few types of places I regard as significantly less safe than most. Especially when on my own. And I was 2 miles from Stonehaven, which is far from known for trouble, but my location was just far enough out from habitation to attract any troublemakers that happened to be around. 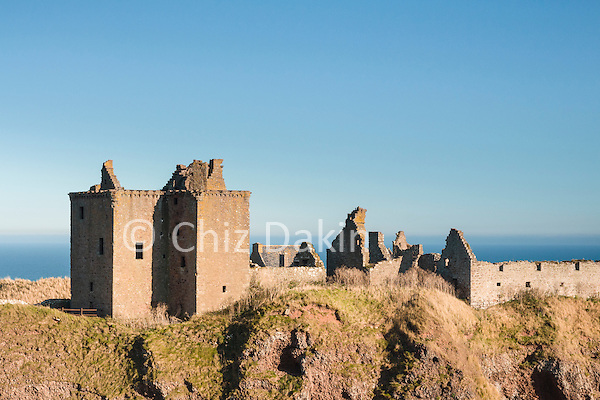 Dunottar Castle, near Stonehaven, in daylight (taken the next morning).

So it’s with some degree of trepidation that I sit in my vehicle and ponder the options. Who are the inhabitants of the other vehicle – are they going to be there long? More importantly, are they going to cause me any trouble! I immediately decide that my plan of wildcamping somewhere along the coast may not be such a clever idea – even with a reasonable walk away from the vehicle.

After about half a minute two guys emerge. Mmm, keys at the ready, this might be time for me to go. But they are clearly ignoring me and setting out for their own walk down to the castle. Ah, so I have competition for the northern lights then. It shouldn’t be too much of a surprise, the forecast is exceptional, and the skies are clear.

I gather my camera kit and some extra warm layers together, and set out. Oh, the lads are returning already? That’s a bit odd… But there’s no lights in the sky other than the very bright moonlight. Perhaps they’ve given up.

My headtorch clearly spooks them a bit as I switch it on – the moonlight means it isn’t needed for much of the path. But it seems courteous not to sneak up on them as they return. They are full of an odd mix of fear and excitement as we meet. “Are you hear for the same reason as us?” they ask. “Probably” I reply, “the Northern Lights I assume?”. They look at me blankly. Obviously not, then!

I had come here on the recommendation of a Scottish friend – who thought (rightly so) that the silhouette of the castle would make a great foreground to any Northern Lights. But my friend failed to tell me something which might have made me think twice about wildcamping nearby… the castle is reputed the most haunted castle in Scotland! 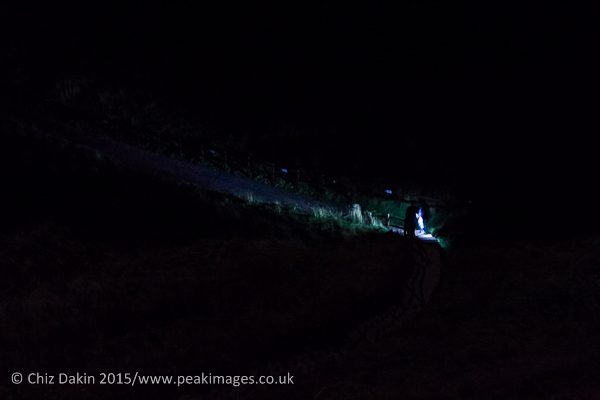 The lads are ghost-hunters and the reason for their excitement all mixed up with more than a bit of trepidation turns out to be that one of them reckons they saw “something” down by the castle entrance. “A ghostly stream of white mist that came out of nowhere”.

They spend the next couple of minutes trying to talk themselves into going back and seeing if they can see the ghostly apparition again. They’re clearly pulled by curiousity and held back by fear as to what the ghostly being might be and if it holds any danger for them.

Ten minutes later, the three of us are walking up to the castle door. I hadn’t intended to go all the way to the base of the castle – rising steeply up from a moat, the angle is all wrong for photos of the northern lights set against the silhouette of the castle. As a foreground subject it would dominate the whole image and block out any view of the sky. But I’m curious as to what (in my opinion) likely natural mist formation had caused their excitement.

There’s no mist to be seen at all as we cross the dry moat. We slowly sneak one by one up the steep steps to the front door. Bravado gets the better of fear and each of us knock on the door. No reply. Nothing out of the ordinary at all. Well, other than three random strangers knocking on the door of a deserted semi-ruined castle in the middle of the night! I get bored quite quickly, and set off in search of some images of the castle illuminated by moonlight – it doesn’t look as if the Aurora is going to co-operate either tonight. 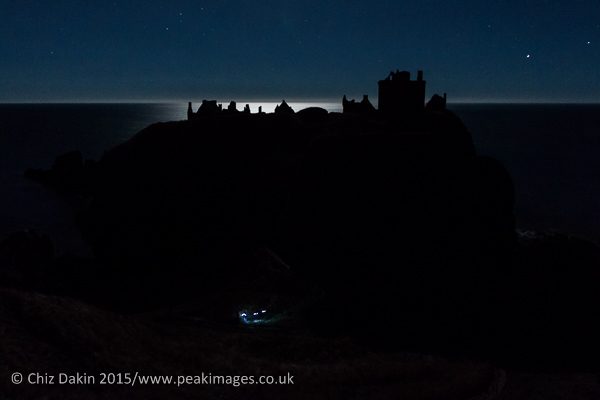 Heading back uphill, I wander around the cliffs overlooking the castle, trying to find the best silhouette. It seems very peaceful and far from threatening – whether from ghosts or humans. The lads are still searching intently below, their headtorches making an interesting glow at the base of the castle. I briefly wonder if I can persuade them to walk slowly along the walkway to give a light trail – but I’m too far for them to hear easily.

Just as I’m packing up my gear, they suddenly yell and run. A proper “run for your life” sort of sprint. The jolt of adrenaline that bursts through me is unexpected and briefly terrifying. What have they seen?

Catching up with them at the top of the cliffs, they say they saw a white guardsman appear out of nowhere. His head was really bright white. And wasn’t there as they passed one way, then “it was just suddenly there!”

They tried really hard to rationalise the experience, perhaps it was the moonlight, perhaps something reflected. But they couldn’t convince themselves of anything rational. And I suspect, if they’re really honest, perhaps didn’t really want to – after all, the point of ghost hunting is surely to find something, not to disprove it’s existance? 😉

This is Part 2 of a series of posts about a very impromptu trip to try and see the Northern Lights in Scotland – Part 1 covers the dilemmas of where to go and how to get there, and Part 3 seeks to find a rational explanation for the ghostly white head.