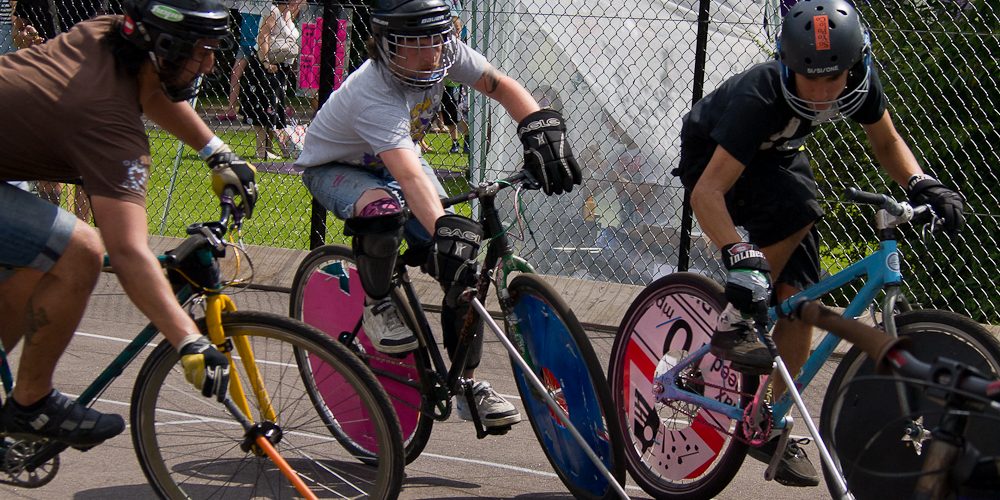 Home » Photography » VF2 electronic viewfinder for Olympus E-PL1 – UPDATE
This is an update to my previous thoughts on the VF2 viewfinder.

While I still hold the opinion that (specifically for activities where you are also participating in the activity – eg off-road cycle touring) the physical shape of the camera plus viewfinder combination makes rapid access to the camera+viewfinder too awkward for general use (especially with a camera bag that’s a reasonably comfortable fit in a bar bag), I have changed my opinion on the VF2 viewfinder for more static uses. 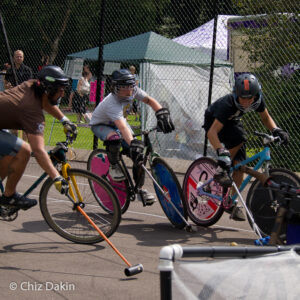 A free afternoon on Saturday gave me the chance to relent and take it to Cliffhanger for a few hours photography. My visit was unfortunately cut a bit short with a crowd-entertaining full-body-plant-on-tarmac when I discovered cycle-polo, and got a tad enthusiastic about an open goal…(!) But before that I managed to have a bit of a play with the VF2 at one of the mountain-biking displays and some of the cycle polo competition games.

The ability to hold the camera in the conventional eye-to-viewfinder position (with an extra point of contact to the camera on the face) does make a great difference to stability over the “preying mantis” position commonly associated with compact cameras. And using the VF2 in bright sunlight cuts out the difficulty of seeing the screen (although that actually isn’t bad for brightness, and settings within the menu system allow you to change this – perhaps for little more cost of relatively meagre battery life than the VF2 itself). Being able to compose the image through the viewfinder has an added bonus too – in forcing you to see where the framing edge (roughly) is, without the distractions of all around it, it helps you take more time in composing the shot, and making sure distractions at the edge are framed out.

It’s good and clear on relatively static shots, though movement of camera or subject can introduce an odd “jumpy” effect (if the view crosses points of dissimilar illumination). The ability to change the angle by 90degrees is also great for those shots where you need to back the camera into a wall or rock to get the widest possible angle – and then could otherwise not view the screen or viewfinder (not uncommon at all for landscape, architecture or macro shots!). And the un-indexed diopter dial should be of good use to those who normally wear glasses, without being so easily knocked off-setting (like the Canon one is prone to, particularly on the Canon 5mk1) that it becomes troublesome to those that don’t need it.

It proved to be good for both manual focus and for autofocus (although that’s a separate issue in itself!) and I can see why, for folks who dislike looking at the screen in bright sunlight, it rapidly becomes a “must-have” accessory. Having said that, the E-PL1’s screen is effectively bright even in UK summer light – far better than I recall my old G9 being – and has not proved troublesome in usage at this point, and in even moderately low light the VF2 can produce a noticeable  “grainy snowstorm” effect which may be undesirable to some.

So in conclusion, if rapid access to the camera isn’t essential to getting the shot (or not!), then the VF2 probably is a worthwhile addition to the Olympus E-PL1; although at £225, it’s nearly as expensive as the camera + 14-42mm lens itself! 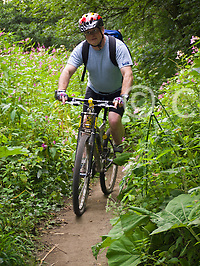 Update 8 August 2010 – having used it a bit more on more relaxed cycling day-trips recently, the VF2 is very useful – and am beginning to get some mountain-biking shots I’m happy with by using manual and pre-focussing techniques. But that grainy snowstorm effect is odd, even in bright light – I’ve accepted it as being usable, but I can’t say I like it! No doubt that’s something that will improve as the technology matures, but as some people find it impossible to live with, it’s definitely something worth testing for yourself in a shop/trade show before purchase.