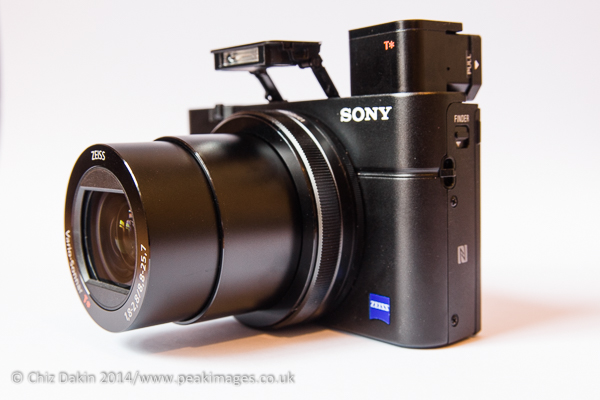 Home » Photography » Sony RX100 mk3. Initial thoughts and real world shooting
The Sony RX100 series has a great reputation. And in many ways very well deserved, it could be the closest that camera manufacturer’s have yet come to solving the “holy grail” of a lightweight, small yet powerful camera with all the image quality that you’d expect from a bulky and heavy DSLR. 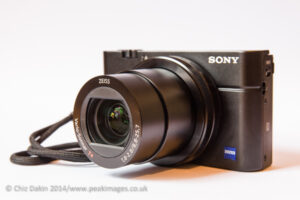 But does it live up to the hype? Is the image quality good enough? And is that electronic viewfinder really worth the extra weight and design compromises over just using the screen?

First of all though, just picking the camera up for the first time it feels so small and light. Now I’m off soon on a trip where every gram and cubic centimetre of bulk really counts, so that feels amazing. But if I’m honest, also slightly worrying. Sony can’t possibly have made something good enough image quality wise that small, can they? I live in hope. But the size of the battery is worryingly tiny too – and it’s rating is only for 320 shots, (230 if using EVF) which isn’t going to last long. How many will I need for 10 days shooting with no resupply? More than I want to carry I suspect. But there is an interesting feature that may reduce battery quantity needed – more on that later.

It’s quite late in the day when I pick it up from Harrison’s Cameras in Sheffield (now one of my nearest physical camera shops). The battery has some charge in it, so I have a quick play with it at a few locations on my way back towards Derby. 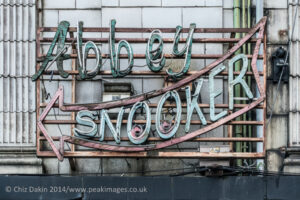 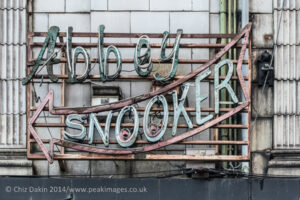 First stop – a random building with an interesting shaped, if no longer illuminated, rusty neon sign. I struggle initially with the controls, they’re very unfamiliar after using a DSLR. But soon figure out that most things are done through the quick menu. Might take some getting used to, but not impossible. But I don’t try anything too complicated here – just setting the date/time, setting up preferences on focussing and metering and removing auto-ISO.

On processing the images I’m surprised just how much “clarity” can be added. Image on the left has zero clarity added. On the right is probably pushing it to it’s limits at 90%, but is more akin to the sharp-contrast look that smartphone gives. On most images on other camera’s 90% would be far too much, although in some ways shows how much smartphone images use clarity and how much we’re getting used to that “sharp contrasty” look. And ofcourse, I’d also forgotten how much of the image is discarded by perspective correction (I rarely shoot this sort of image!), but that’s inevitable whatever camera you use if you choose to correct that in software rather than by tilt and shift lenses.

I then have a brief play with the viewfinder on the same composition. Hmm, very blurry. Oh, you have to pull it out a few mm once you’ve popped it up. How strange! I guess that’s one way of saving space and isn’t a problem when you figure it out. The eye proximity feature works well and there’s an interesting feature where opening/shutting the EVF also acts as an on/off switch. Very useful for those that only use the EVF, but could get annoying if you only use it occasionally. I don’t find it easy to use though. Perhaps I’ve just got too used to manual focussing with liveview and 10x magnification, but I personally find it too low res to focus accurately and sharpness of the overlaid info at the lower edge isn’t wonderful. 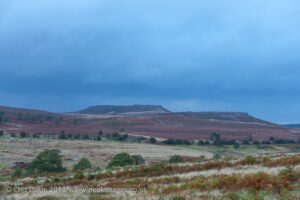 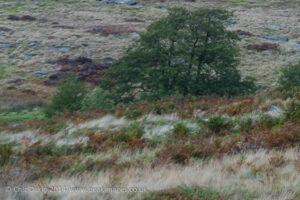 A brief stop at the top of Padley gorge tests a landscape in low (and not wonderful quality) light. It’s erm, adequate. But in fairness, that’s down to the light more than anything, it’s just not very inspiring whatever camera you put in front of it. The camera is very fast to auto-focus and grain is well controlled at ISO 100. The little Joby Gorillapod that I’ve recently acquired seemed to be a good stable match for it’s weight too.

But back at base, and I’m really disappointed. Corner softness is very poor. Is it just this image? Hard to tell immediately.

I try testing out it’s near-macro capabilities (f/1.8 lens can focus very close to subject) but the wind and bracken leaves just aren’t co-operating. Just too much movement of the subject (and quite possibly camera, as it was handheld).

Next up a test of it’s low-light capabilities – ISO Noise. Given that DXO only rate the sensor as ISO495, I wasn’t expecting too much of this. But actually was very pleasantly surprised. At small sizes, even ISO6400 will accept a good amount of noise reduction in lightroom.12800 obviously is not a setting you really want to be using, but even so I was pleased to see that most of its noise was luminence speckle (aka grain) rather than chroma noise (colour variations).

As that makes far too small an image to really see much difference (and at small sizes, its only really the ISO12800 shot that shows any difference), I’ve taken a small crop of ISO 100, 400, 1600, 6400 and 12800 shots – which shows the variation more clearly. Although note that shutter speed also decreases which affects the look of the flowing water. I have to say though, that I’m very impressed with its noise control even at very high ISOs based on this simple test in pretty low light.

It was after dark as I passed through Matlock, so I decided to take a few quick shots of the illuminations down the road. AF hunted a little on the first couple of shots, then locked on reasonably quickly.

At the time I thought the images of the illuminated dragonfly were so-so. But back in lightroom, I’m actually quite amazed how much processing they take (and to be honest require). And consequently how much detail can be pulled out of a seemingly murky and low contrast raw file. 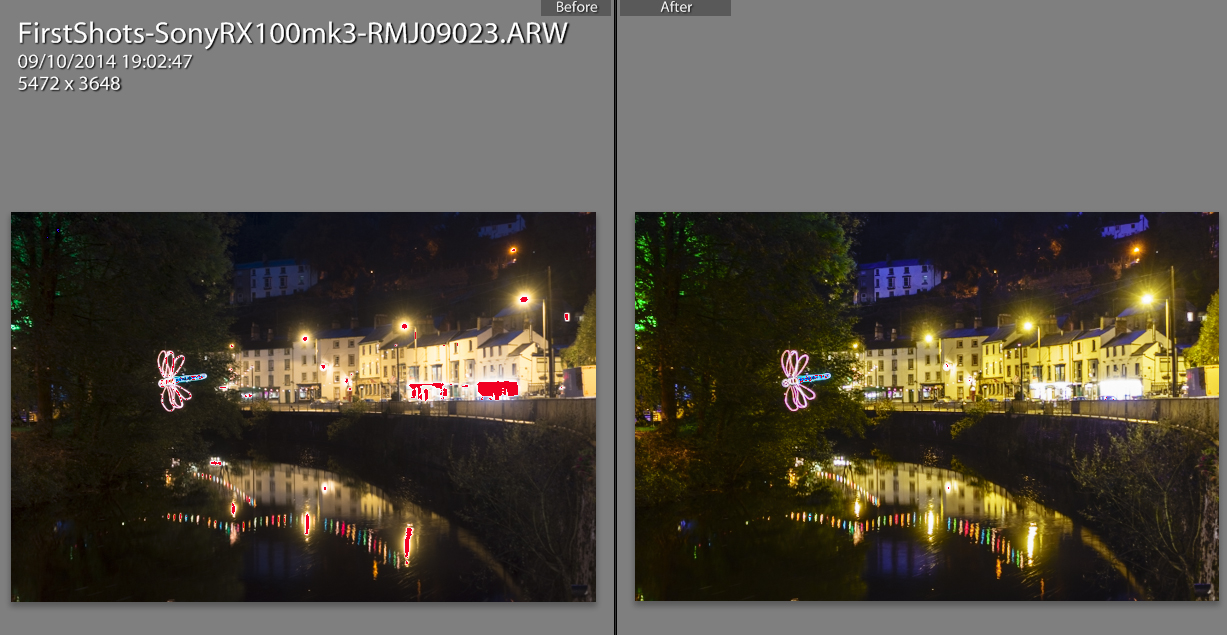 Is it as good as a shot my 650D could take? I’m actually not sure, the only way to tell is a true side by side test whic I couldn’t do on that occasion. It may be that it’s not – but it’s a lot closer than I thought at first.

However, change the subject to something with clean lines, and high contrast, and it shows it’s strengths. 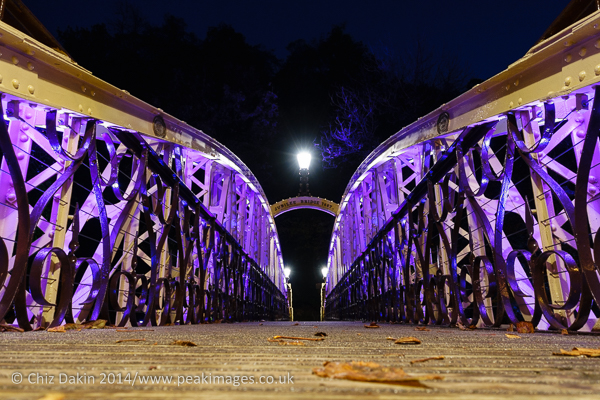 Shot at ISO 400, this one has not had any noise reduction. Camera profile “light” (still figuring out what these predefined ones actually do), small bit of highlight reduction, small amount vibrance and clarity (as I’d do with 650D images). And as all the rest of the images had sharpen for web on JPG export, I left that too. Am very impressed with it’s ability to record high contrast, well lit, night time shots. Which in fairness is probably more a typical “night time” shot than landscape shots, but also rather easier to get something pleasing from on any camera.

Still very early days to form an opinion, but initial verdict is that in the right conditions, the Sony RX100 mk3 has impressive image quality for such a small package.