It’s always a dilemma when you have things that really need to be done and things you really want to do. And when they’re diametrically opposed, then often the result it that neither ends up being done really well. Having finished with cycling instruction for the day, it was just too nice a day to go indoors… But needs must, greetings cards needed to be printed, rather doing as I wanted and heading straight into the Peak District with the camera. And back-to-frontly, the indoors job of printing took even longer than it should as I was staring out the window when I should have been watching the printer. 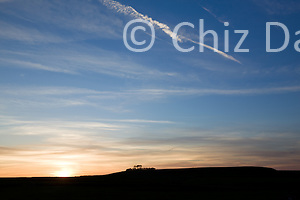 So it was getting a bit late by the time I gave in (also have some prints that need to be done, but they’ll have to wait til tomorrow!) and headed out with the camera. I needed somewhere close, and without a long walk in. I thought Harboro rocks might have been worth a look, the westerly facing aspect should have been good in late evening sun – but the parking was overflowing with climbers cars, and the light had got a bit low. But Minninglow was nearby – and the low sun enough in the sky now that I thought it had a good chance of making a nice silhouette.

The sun was just setting as I drove up. Although there was a bank of cloud on the horizon, it was thin enough to let weak golden light through. And above that was a great series of thin wispy clouds, oh and a contrail. It’s funny, some people like them, others loath them. I happen to like them when they go all wispy but still contrast well with a blue sky, and add some visual interest to the sky. And the trees on the skyline were the final touch to the image.

Only time to get one image tonight, but at last we have good photographic weather again – it seems like spring might perhaps be arriving at last after the recent cold, dull and grey weather we’ve had recently!