Home » Photography » Just back from recce trip for Spanish Outdoors Photography in Andalucia’s Alpujarras and Sierra Nevada
And it’s even better than I remembered!

The sunsets are awesome in the eastern end of the Alpuharras and Sierra Nevadas. I experienced a spectucular orange glow to the cloud formations from the Elorietta Hut last time I was out here, and this is apparently fairly common in the eastern end of the Sierra Nevada/Alpujarras. And Lanjaron is in a pretty good position to capture the best of these sunset – looking west over the coastal hils and without having to go too far from base to get the views! 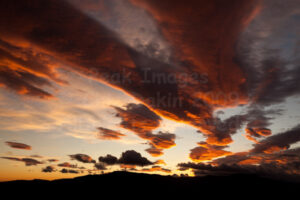 This picture was taken  above the “Ermita” overlooking Lanjaron. I’d actually intended to take images from the Ermita itself, which is likely to be a better location but in my haste to get there, I missed the path. With no time to spare, it was a dash for the highground, (or miss my shot, which was not an option!), so I ended up climbing at least twice as high as neccessary (and gained some awkward pylons for my sins).

Still less than 20mins out of town on foot, it’s a great sunset location, and one to be remembered for the workshops!