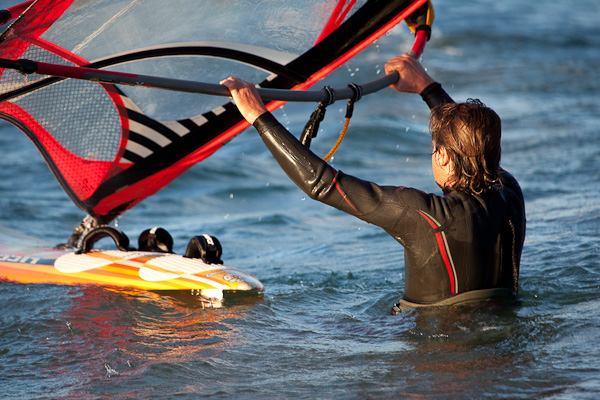 And after most of the day had already gone, it was time for the serious business – taking the windsurfing photos that were the reason for coming to Cuesta del Viento in the first place! Sarah seems quite keen on photography, so although she’s not feeling fantasticly well after 3 nights of bus travels, decides to come down to the lake with her camera too.

Arriving at the beach-side, I discover it really was only 800m from the hostel – barely worthwhile taking the car. And although the flags sound like they’re trying to rip themselves off the flagpoles, the lake is distinctly lacking in white-topped waves. Not a good sign, and probably because of that, not many windsurfers are on the water. 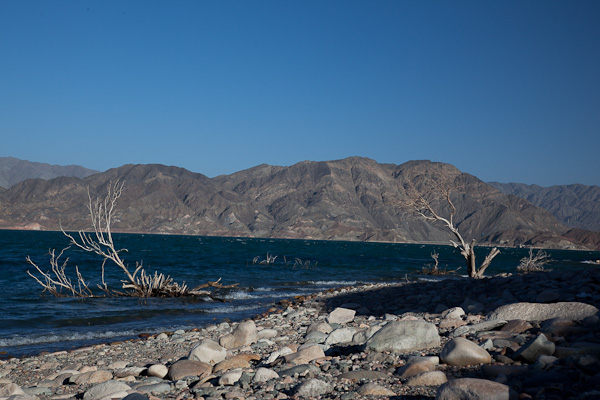 I start out by wandering up the coast a little – there’s some interesting drift-wood like trees by the shore, and they are catching the light quite well. They’re also good at being reasonably out the way of folks on the beach, so me and my kit is much less obvious (while there’s not a lot going on, the risk of as then random strangers knowing my kit is more than the average tourist fare doesn’t balance against the potential rewards of great photos).

As I get a bit further up, I see that there’s quite a few kite-surfers further up the lake, nearer the dam wall. Even with my long lens (that’s max 400mm) they’re quite small, but that’s quite good for capturing shots of them in context with the mountainous background behind. And as it’s now nearly the magic hour, the light ain’t bad either. There’s a couple of folks crossing paths near the far shore, and their kites are making interesting shapes as they cross each other.

Suddenly a couple of dogs that were on the beach (I later realise they are two of the four hostel dogs 🙁 ) come bounding up to me. GO AWAY! The last thing I need is a dog licking my lens while trying to take good windsurfing photos. And aside from that, its hard enough hand-holding the 400mm lens at the best of times without having to worry about what two random bouncy dogs are doing, and whether they’re about to jump up at me and my kit.

Fortunately the wind is beginning to pick up again now – and folks are coming back out on the water. I head back towards the beach – I’ll have to take the risk that folks will realise the camera’s a bit more than just OK – but hopefully the pix’ll be worth it.

And then the wind picks up a little. Folks begin to plane – and play with carve gybes and a few other trick manoeuvres that I’ve forgotten the name of – or possibly hadn’t even been invented last time I went windsurfing (was it really 10 years ago?!)

I get a few nice “frozen motion” shots, and a nice close-up of someone watersarting,  and then try for the harder, panned shot. That’s not going so well, by the time they’re close enough to make the shot, they’ve shot straight past me and are too close. Mebbe its a shorter lens shot?

Eventually I get a shot that I’m not expecting – a panned shot that’s very soft focus, and not at all my usual style, but actually I really like. It’s not one for the textbook, it’s one for me, but everyone should have a few of those every so often!

A couple of guys are quite obliging and having seen me, start doing their gybes as nearly in front of the camera as they can get, and that really helps make the shot. There were a few folks doing some awesome jumps further out on the lake in the windiest gusts – but they were too far away to get anything worthwhile pictures of them jumping – it really makes a difference being close enough – even with a long lens there’s only so far it can reach.

And although the wind had looked very unpromising at the start, it was allowing some good photographs of the windsurfers now. Apparently it had been more typical white-lipped waves all over the lake yesterday afternoon, and this was unusually light winds for the afternoon. Good thing I’ve planned for a second day here then – let’s hope for more wind tomorrow!