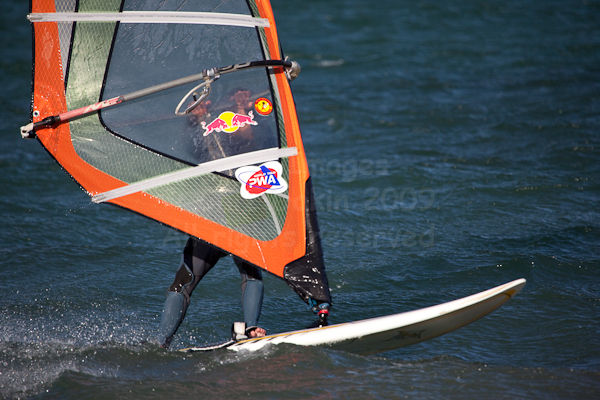 Home » Photography » Gale-force winds result in great windsurfing conditions and pictures at Cuesta del Viento!
This morning, the winds are light – as usual for the morning. I venture out early to get a few pictures of the lake being as calm as a millpond – and get ferociously bitten by the local insect life for my trouble.

Then it’s off to explore the area around Rodeo while waiting for the afternoon wind. I’m tempted to see the Paso de Agua Negra, but my plans for that are scuppered by Argentina ending 179 km before the Chilean border! It might be no-man’s land, but the hire co won’t let me take the car out of Argentina, so as Argentina ends well before the pass that’s not an option. Real shame, as the road up the Paso de Agua Negra has only just been opened for the summer, and so should still be in very good condition.

But the photos that I get within 10km of Rodeo are worthwhile enough not to mind too much. Heading eastwards out of Rodeo and towards the “pass” where the valley of the Rio Jachal gets very narrow, in particular is very scenic, and I spend quite a while jsut around the edges of the Cuesta del Viento and 0n the start of the Rio Jachal pass.

Then its time to head out to the water again. There’s more folks out on the water today – probably as conditions are approaching gale-force at times. Fantastic! But the wind direction has changed from yesterday – more cross-on than cross-shore, and it makes taking pictures much harder. Yesterday the angles were easy, today I’m bouncing either side of the Puerto de Palos centre trying to find the best spot – ie one where windsurfers can gybe in front of me, with their face catching the evening sun, and without their sail reflecting too much light. I’m also bouncing between two techniques – panning shots at 1/50s to freeze the windsurfer in action, but show the motion with background blur, and keeping the aperture wide-open to freeze all the motion with a shutter speed as high as possible, but blurring the background via the aperture setting.

A couple of guys see my camera and start aiming their gybes to be in a good position in front of me – very helpful! One of them turns out to be Adrian Diaz, a professional windsurfer – it seems Cuesta del Vienta is one of his favourite spots for windsurfing, as he spends 2-3 months of the year here.

All too soon the sun goes down, and the shows over for the day. A quick drink in the bar with some of the lads who’ve been kind enough to pose for me/talk to me afterwards, then it’s time to head back to the hostel. I get an offer to go to the Thermal Baths at Pismanta, which I’m very tempted by, but I’ve got pictures to download, and blogs to write! I am getting very tempted to stay an additional day and go out on the water myself though. 10 years it may be, but Cuesta del Vienta looks to be such an awesome spot that I think I’ll kick myself if I don’t at least try to windsurf while I’m here!