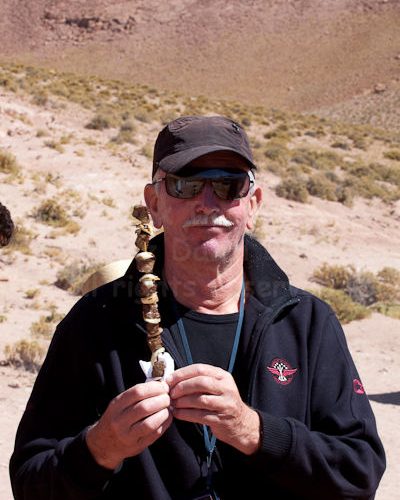 This morning’s a very early start – Williams collects us at 0400 for a two hour trip to the El Tatio Geysers, some 100km away down mostly very rough sand and rock roads. The geysers are amazing, well worth the hideously early start and rough bumpy track. But particularly on this trip, there isn’t really enough time on the tour for photographers – Williams seems more keen on getting everyone to the far side of the first geysers stop for breakfast – which I miss through taking my time with the photography! (Apparently it was no great loss!)

Tourist with towel posing as surreal figure in the geyser mist

Then it’s off for 20mins at the thermal pools on the eastern side of the valley. Again, I’m the last back to the bus – I found some stunning images. Also an unexpected image or two – I thought that one of the tourists had been for a dip in the pool, and having towelled off his hair, realised that some cool photographs could be got by his mate if he stood behind some geyser steam. They had no problem with me jumping in and taking some pictures too – until after I’d taken them. I’m still not entirely sure what the story was there, but the pictures were really cool.

Suri in the Atacama Desert, Chile

Then it was the long journey back down those rough roads again. Despite stopping off at Machuca village for a llama kebab (thanks Theo for sharing one! – and quite surprisingly it tasted more like beef than lamb), and several stops for wildlife photography in the Atacama Desert, (we saw vicunas, suris- an ostrict-like creature, geese and llamas)  it seemed much longer, as this time we were awake.

Then it was back to the Hotel Altiplanico and onwards to Santiago to meet up with Reuben.

Antarctica now beckons, and this blog may have to take an enforced break during that journey as I’m not aware of any communications facilities available to us on that part of the trip. If possible, I will get a message out by phone every so often to my friend Richard, who will update the blog with my latest location. But until New Zealand, adios for now!