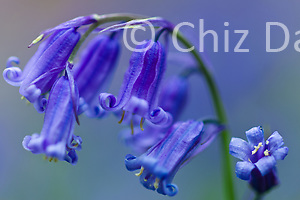 Derbyshire bluebells seem to be flowering really early this year (or was it just that they were really late last year?) My last bluebell photography trail was towards the end of May 2010, this year, I doubt any will still be around come then!

And having arrived awkwardly early (I’ve had almost more work from Cycle Derby recently than I can handle!) today was the first day I’ve really been able to get out properly and see what’s happening with them. And they’re already in full bloom in several locations. So 2011 seems to be early flowering for bluebells – perhaps the unseasonably warm weather we had last weekend was the cause, but they’re at their absolute prime right now.

On my way to check out some of my known locations today, I discovered a new location, near to Holloway. It’s such an unknown location that I had a quite unexpected and unpleasant experience with a set of dogs and their owner. Happily crouching down, eye glued to camera on tripod, lining up the exact bit of the bluebell flower I wanted in maximum focus, I was suddenly disturbed by barking 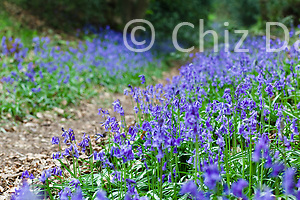 very close to my ear. A small terrier-type dog had run up to me unexpectedly, and to say I jumped a mile isn’t a huge exaggeration!

(I’m not keen on dogs at the best of times, and those that sneak up on me and bark aggressively in my ear are particularly disliked!) Then three more of it’s mates came up, all barking very aggresssively with fangs beared and circling around me. I was rather glad of the tripod at hand to give me some distance from the menacing fangs! Shortly after a teenager came jogging up to the dogs, and stopped rather dumbfounded when I asked her if she always allowed her dogs to behave so aggressively in a public space. A few seconds later her mother arrived, and started to ear-bash me for ticking her daughter off!

The mother did at least have the decency to apologise in the end and put the dogs on leads – but it never ceases to amaze me how many English (and yes, it does seem to be a particularly English thing!) dog-owners assume that everyone in the world would want their dog to come rushing up to them, and that if you don’t like it, then somehow you’re in the wrong for being there, rather than the owner being in the wrong for not training them better! But rant over, it seems the dogs were surprised to see me as “no-one ever comes here”, which is a rather good sign for a new bluebell photography location!

The main location is a long woodland path, lined with bluebells either side as it winds its way moderately uphill. As the gradient eases, the bluebells spread out over a wider area, but overall this gives a good amount of accessible space for several people to work with individual areas of bluebells without getting in each others way – an excellent location!

So if you’re keen to learn more about how to get better shots of bluebells, then please contact me very soon – I’m available for bookings on a couple of days this week (April 18-22) and a couple next week (April 25-29), although I’ve already got a number of commitments as part of the Peak District Walking Festival next week, including the launch of my cycling guidebook on Saturday at Buxton Pavilion, a couple of Peak District cycle tours (places still available) and a photo-walk at Padley Gorge (which my local camera club twisted my arm to lead – all places are already fully booked for that one, I’m afraid!).  After that, it depends on how long the bluebells continue to flower!

The bluebell photo trails are very affordable, just £25-35 for two hours, and I’ll even run them on a 1:1 basis if that’s the way it works on dates being such short notice.