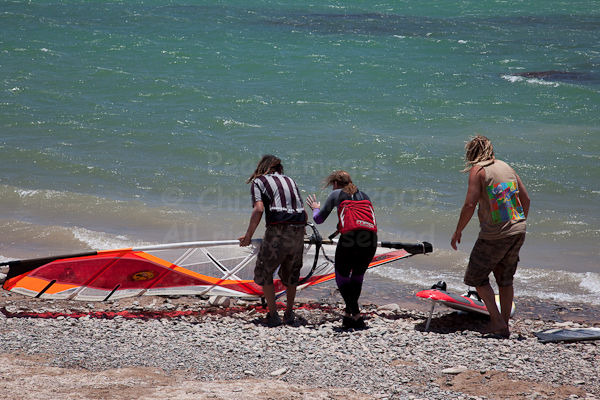 Home » Photography » 10 years ago I could windsurf – can I still remember today in the strong winds of Cuesta del Viento?!
I really shouldn’t stay another day here, and I’ll have to miss out a few places I intended to go to – but I really couldn’t leave here without having a go at windsurfing myself.  It’s 10 years since I was last on the water, and I’ve no idea how much (if any!) I’ll remember, but it has to be tried!

Cuesta del Viento (and the Hostel Rancho Lamaral) seem to be one of those places that get to you – the sort of place that you arrive at intending to spend only 1 night at, and then end up spending another, and another, and before you know it, you’ve had half a week or even a week here!

Cuesta del Viento - first thing in the morning it can be as flat as a millpond!

I head out early in the morning, it’s the first time I’ve woken up at a sensible time since arriving in Argentina, my body clock is heading east again, and getting nearer local time. I’m curious as to how the lake looks first thing in the morning, and if it’s really as flat and calm as a millpond, as the lack of wind now suggests! It is – totally unlike the afternoons. And a real surprise, given just how windy the afternoons are. Only one downside – hordes of biting midges – the wind’s really necessary to keep them at bay.

Anyhow, back to windsurfing…

And flip that sail round to the right position - again. (At least this one's a deep water beach start rather than a full-water start!)

“Sail – mast into wind, balance boom on back of board, shuffle back foot onto board keeping tons of mast-foot pressure, lift sail up into wind, and way-hey! Waterstarts r us :)”

And two seconds later the gust dies … and I fall straight back into the water!

Start again. Swim sail so the masts into the wind…

Waterstarting is a lot harder than I remembered, but it’s good that I’ve not totally forgotten the technique 🙂

"Beginners" kit for remebering how to windsurf after a 10 year absence!

I’m feeling a bit like a beginner again, and the floaty board I’m on doesn’t help dispel that feeling, but its probably a good  move. Franco (one of the owners of the Puerto de Palos windsurfing hire centre on Cuesta del Viento), seems to think it’s a good idea, although as the wind picks up even more (I’m now on a 3.7m sail!) I’m very unsure about the wisdom of so muchg volume and the evil daggerboard. Though I have to admit Franco has a point about it being useful if my waterstarting failures take me too far downwind!

One of the early blasts has me grinning from ear to ear – full on planing, feet in footstraps, even the strange new design of waist harness seems to work 🙂 I almost make it to the far side of the lake, then get tempted to try turning. That was a mistake – I’ve definitely forgotten how to do that. Eventually Franco sails out with a smaller sail – and I get myself back to shore.

Chiz discussing yet smaller sail sizes with Franco and Emil

Sail size decreases fairly rapidly over the next hour or so, until the wind is all too soon is at 30+knots. That’s roughly a Force 7 – about as strong a wind as I ever used to be able to sail in. Too much for me now, but awesome to have played with the wind at such a location as Cuesta Del Viento!

Somehow I think the windsurfing bug may have struck once again 🙂

(And many thanks to Petra for coping really well with having my camera dumped on her to grab a few shots of me while she was waiting for her kitesurfing lesson!)