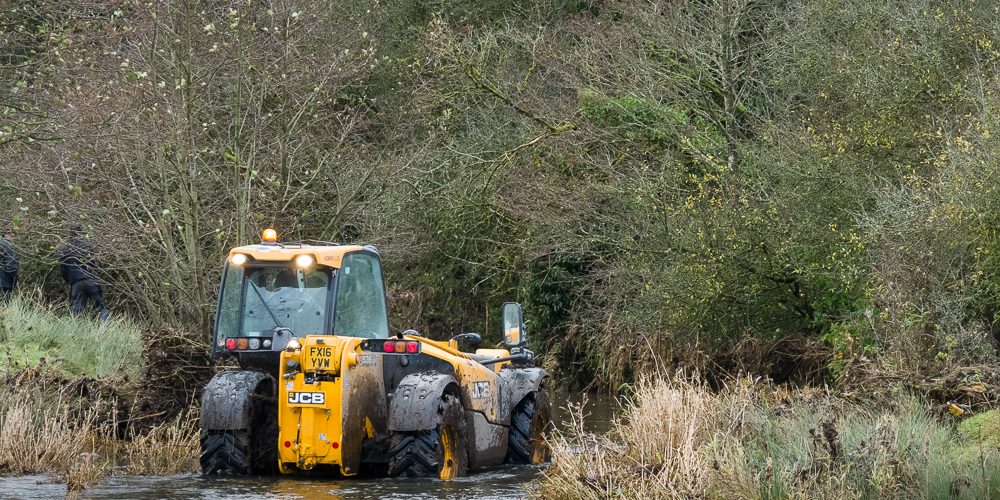 Home » Other » Winter storms – driving through fast-moving floodwater and fords can cause a swim
It’s rare that I blog about driving, but this one is travel and winter storm related. I was driving up into the Peak District in search of elusive sunshine for some photos for the update to my Peak District cycling guidebook, when I passed a van that had been trying to swim. 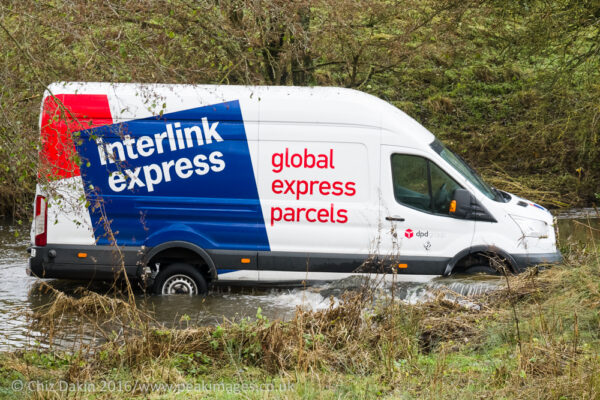 And that reminded me of a conversation I’d had the previous day with a friend who’d been driving back from the Peak District in the torrential rain of Monday (while Storm Angus was wreaking havoc further south in the country). She was complaining that the boot of her car was still wet after driving through surface flooding near Rowsley. She didn’t seem overly worried about having driven through the flood, just the inconvenience of the dampness still in the car. I rather suspect she still doesn’t appreciate just how little water, especially if fast-flowing, can knock the wheels of an average car off-course or float it downstream. 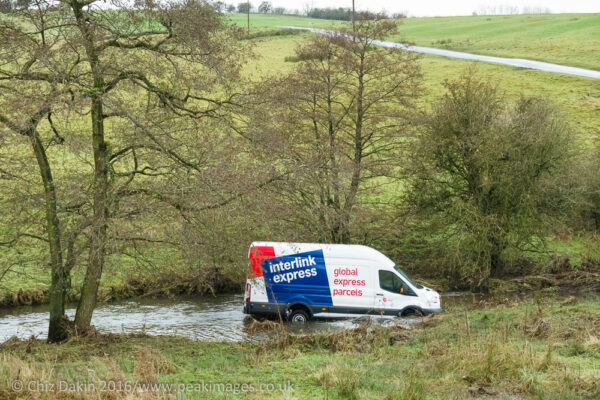 Wider angle view showing the van and the road it should have been on above! 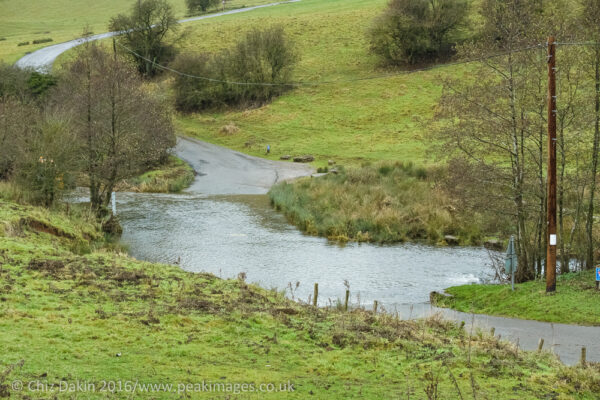 The water levels weren’t high, but the stream was flowing very quickly 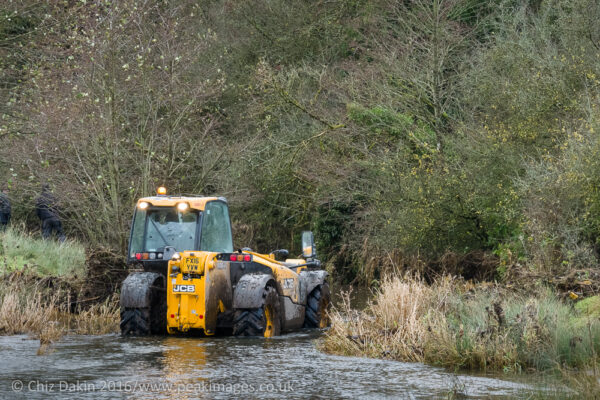 There were about eight people on the banks, including the driver of a large JCB which was finding it hard work driving downstream to rescue the panel van. Having attached a chain to the panel van, the JCB then had to haul the weight of the van against the weight of the fast-flowing water. It looked very difficult! 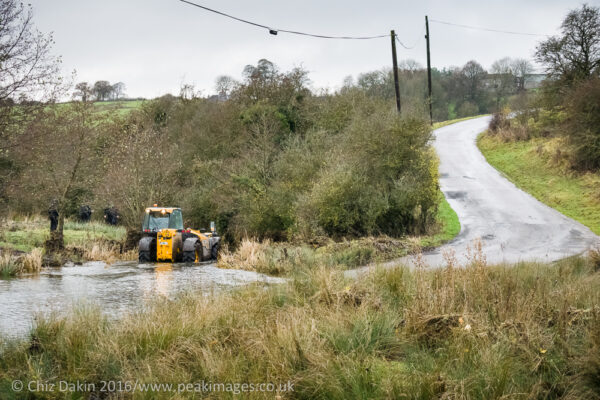 Wider angle view of JCB in the Bradbourne Brook 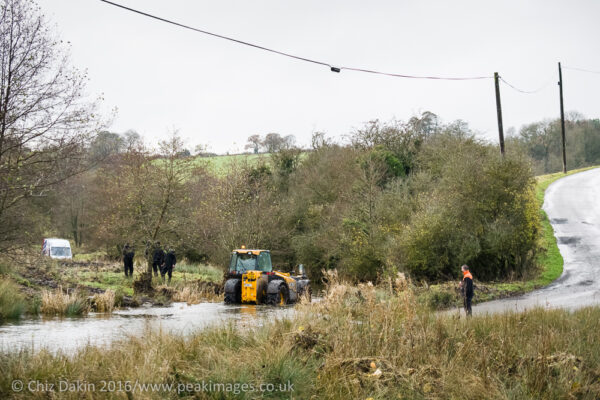 Having driven the Gibb River Road in Australia (with its inevitable creek crossings) and some glacial fords in Iceland – not to mention fording hundreds of minor streams on foot, I’d hope I’m a bit more aware than some of the power of fast moving water. And the damage it can do to the unwary – whether on foot or in a vehicle. 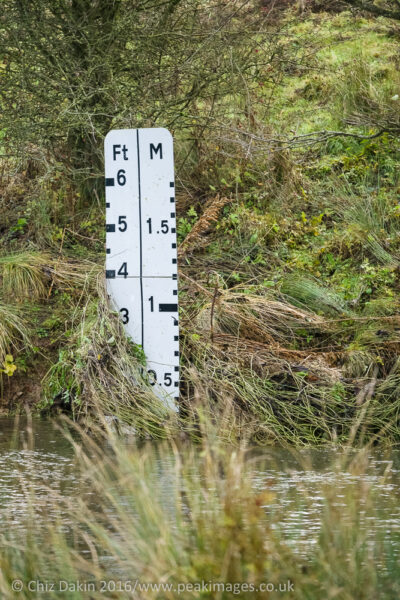 The depth board shows just under a foot of water!

I’m not sure exactly when the van took its unintentional swim, but by the look of it, it hadn’t been in the water long. And the depth board in the ford was showing just under one foot (less than 30cm) of water flowing.

And 30cm is all it takes to float your car according to the Environment Agency!

But streams and runoff flood-waters can rise and fall quickly, so it may have been at a higher level when it took its swim – the vegetation beside the depth board shows signs of having been disturbed by fast-moving water to a higher level. I don’t know about that, but it didn’t look as if the van had been in the water very long.

So what height of water is safe to drive through?

First off, for simplicity, lets assume the water is just a static floodpool, and not moving as it does over a ford or in some floods.

The lower clearance your vehicle has from the road, the quicker it will float.

Think of your vehicle as being a box on wheels. When the water level reaches the base of it, the water starts to support the weight of the vehicle. As the water rises further, the vehicle begins to float, due to the relative difference in weight of the air inside and the water supporting it. A bit like a ship really!

That said, it’s still a fairly narrow line between the force it takes to take the wheels out from under a light and small car compared to a larger, higher clearance heavier vehicle. In part a larger vehicle will have more ability to float, but that should be offset by much greater weight and higher clearance.

And if the water is moving?

In very simple terms, the faster flowing the water, the more power it has, and the more likely it is that it can sweep you or your vehicle off your feet (or wheels). Water weighs 1kg per litre – or 1 tonne per cubic metre. I’ll keep this simple – if your car is five metres long, and the water is 20cm high, if it was to move sideways through the water it would be pushing through a ton of weight. Or to put it another way, about the same weight as an average small to medium sized car.

As soon as that water begins to move, that ton pushes against the car with a force proportional to the square of speed. So doubling the speed quadruples the force!

Hopefully it’s now easy to see why such small amounts of water, if flowing fast, can sweep even a heavier vehicle off its wheels.

Another way of putting it is that according to the AA, it is impossible to stand upright in waist-deep water flowing at 4mph. And reading between the lines of AA and EA advice, all vehicles except specialist vehicles (such as Iceland’s very heavy duty extreme clearance 4×4 buses!) will already have floated. Probably well before that depth or speed is reached. And that’s before you worry about engines becoming hydraulic locked (water doesn’t compress, so if sucked into the engine can seriously damage it) or electric failure (more typically a petrol engine problem).

This is getting long – so I’ve moved 10 tips on driving through floods to a separate post.