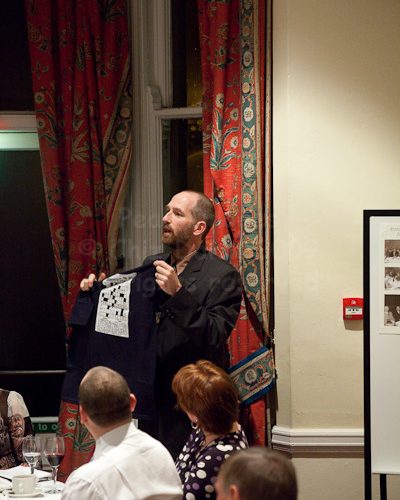 My local climbing club, the Oread, celebrated it’s 60th Annual Dinner last night. I very nearly didn’t go, despite the fact that it’s quite a historic occasion, as I simply have too much to do before I’m next away. But I relented in the end, and I’m glad I went. It was a good sociable occasion, great to see some of the older members that don’t make it out often, especially those that have moved  away.

It turned out I was sat on a table next to the first female member of the club – first member in her own right, that is. Apparently there were female members before her, but only “as wives of existing members”, and it caused great furore at committee meetings! The problem apparently was over who was going to explain to her parents what had happened, should any accident happen while she was climbing! (She was 17 when she joined, at a time when the age of majority was 21). Of course, this issue of “what to tell the parents” appeared not to be a problem with regards to the lads of a similar age in the club – how times change – and in this case, definitely for the better!

Not surprisingly I was also pounced on by our outgoing dinner organiser to take some photographs of the occasion. Very much NOT my style of photography, but a good test for the 5DMk2’s low light/high ISO capabilities.

It certainly tested the camera to its low-light limits  – even on ISO 6400 I was still hand-holding at 1/8s at times. Results were surprisingly good – although high levels of digital noise were present, this was far from unusably so, and where people were still (not easy with a group of 80!) results were surprisingly sharp. Chromatic aberration was far worse than I’ve noticed on landscape or action images (typically ISO 100-800 for those) but that’s easily correctable. The auto white balance let me down – giving the usual yellow tint to everything under tungsten lighting, but again that’s easily correctable (if you shoot raw).

So overall, quite pleasantly surprised with the results of this low-light experiment with the 5DMk2 – especially as some of the shots were taken after a glass or two of vino tinto!