Skip to content
Home » Cycling » Re-discovering views lost for 40 years – Monsal Tunnels reopen!
High up above a bend in the River Wye, a lovely viewpoint that’s been lost to everyone for the last forty-three years has become accessible to all once more. The viewpoint in question overlooks the limestone cliffs of Water-cum-Jolly, but being sandwiched between two abandoned railway tunnels, was closed off to all when Dr Beeching’s railway cuts closed the Bakewell to Buxton rail line. This, of course, is the railway line which opened in 1863 and prompted the infamous scathing comments of John Ruskin of “The valley is gone… and now, every fool in Buxton can be in Bakewell in half an hour and every fool at Bakewell in Buxton”. And how strange that Dr Beeching’s much-loathed cuts should end up providing a positive outcome (not that he can claim any credit for it!) in the newly extended Monsal Trail. 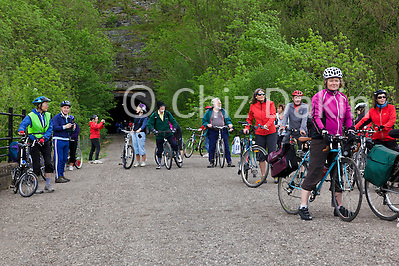 Although the official re-opening of the Monsal Tunnels is May 25th, when the Transport Minister will come to do some ministerial red tape cutting/speechery, the tunnels quietly and less officially opened early this morning (Fri 13th May). I was one of the fortunate few to know about this, and was ready with hastily “Heath-Robinson” engineered camera clamp on my bike to mount my trust Canon 5Dmk2 in the hope of acquiring some video footage of the newly extended Monsal Trail cycle route through the 4 reopened tunnels.

(Video is a new venture for me, and I’m still very much at the early experimentation stage!). But having had fun being part of the team making “ILikeFish” last year, I’m keen to have more of a play with it and see how it could fit into my professional toolbox.)

A £2.25 million Pedal Peak District project funded by the Department for Transport, the National Park Authority has had to arrange for four former railway tunnels – mothballed and out of commission since the former Midland Railway closed in 1968 – to be cleared out, repaired, lit and resurfaced. But as Jim Dixon (Chief Executive of the National Park Authority) states “Through this project we are opening up the important limestone landscape of the Wye Valley” and “By investing in the new route we increase opportunities to go cycling, walking and horse riding instead of using the car. Some local residents will use the new route for commuting or a social ride, while for tourists it offers a safe, traffic-free environment to enjoy what is so special about a national park.”

Arriving early was a good move – I managed to film a complete run through the Headstone tunnel, before meeting up with a group of cyclists at Hassop Station, including Carol Parsons (Recreational Development Officer for the Peak National Park), Jeremy from Peak Cycle Links (the development organisation that is project managing much of the Matlock to Buxton, Monsal and High Peak Trail Extensions project), Duncan from Hassop Station Cycle Hire, Gill from Visit Peak District and David from Pedal Ready. How did I get an invite? Well I’ve just written a guidebook to Cycling in the Peak District – that may have had something to do with it 😉

Cycling through the tunnels you can see the hard work that’s gone into clearing them from nearly half a century’s rubbish, creating a smooth tarmac surface down the central strip, and installing no less than 123 low-power, long-lasting LED lights. According to the Peak District National Park Authority, these are programmed by photocell sensors which shut off at night (to save power at times of very limited use). Although the tunnels will stay open overnight, users are advised not to enter the tunnels when they are dark (a three hour emergency battery provides power for daytime users to exit in safety should the power supply fail unexpectedly); however a strong torch/front cycle light would be sufficient to light the way if eg using the tunnels on a dark winter’s evening to save a cycle commute along busy roads.

Cycling through the Headstone Tunnel with the group, it took a surprising 50m into the tunnel before anyone chose to test it’s echoability. (Good with a high-pitched “whoooop”, as you’d expect from a 490m long tunnel, but not as good for an “ekkkkkoooo” as you might think.) I somehow doubt the tunnels will be quiet for a good while now though, as visiting kids (and adults) each discover for themselves the quality of the echos in the tunnels!

Although the Headstone Tunnel under Monsal Head is the longest tunnel at 490m, the rest are not far behind – Cressbrook (440m) and Litton (457m) being the two sandwiching the rediscovered viewpoint over Water-cum-Jolly and Chee Tor No 1 (368m) the fourth and final tunnel to be reopened and providing the final link on the new route between Great Longstone and Wyedale Car Park. The entire project has been underway since 2009, and is part of a larger vision by Peak Cycleways to connect together a traffic-free recreational route from Matlock Station to Buxton via Rowsley and Bakewell, and from Buxton back to Cromford (on the same Derby-Matlock railway line) via an extended High Peak Trail. This re-opening of the Monsal Tunnels represents the culmination of Phase 1 of this larger project, and rumours abound that planning permission and funding bids have been submitted by Derbyshire County Council for Phase 2.

As regards my route (#15 in the guidebook) – to exchange happy cyclists from Buxton to Bakewell and back 😉 this reopening of the tunnels provides a much needed link past a very awkward, bike-carrying section down an awkward step to the footbridge near Litton Mill and avoids a couple of large ascents up past Cressbrook and Monsal Head. And making that route nearer to a hard moderate level than well and truly in the “hard” category. And of course, the route is already listed in the guidebook – knowing of the work being undertaken while writing the guidebook, I was able to take account of it in the route description!