Skip to content
Home » Photography » Winter has finally arrived!
Yesterday I should have been processing some of the huge backlog of images I’ve gathered while away this summer/autumn, and getting on with several things in the in-tray. But something strange had happened to the sky – it had gone a very odd colour. We don’t seem to have seen this blue shade in the sky very much this year, so eventually I had to give in and take the camera for a walk. 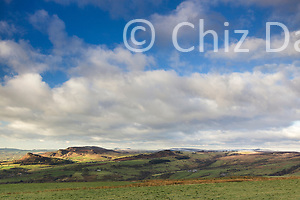 I set out with the intention of heading to the Roaches. As the days are short, I wanted to be up high rather than in a valley that would lose the sun all too quickly, and gritstone edges are always good for afternoon sun. But on my way there I stopped on Morridge – a long hill running just east of Leek. Its one of several favourite spots that I return to on a semi-infrequent basis, but this time I didn’t stop long. The car’s temperature gauge said it was only +0.5C outside, but the windchill was phenomenal. With one glove on, (thick gloves aren’t so good for operating cameras!) it was seriously biting cold and although I felt a wuss I had to give in and sit in the heated car after less than 5 minutes outside as my right hand was just hurting too much from the cold (the camera got the relatively chilled boot so it didn’t get too much condensation). But during my brief stop there I saw that higher ground had snow on it, and couldn’t resist heading up to the snowy reaches of Shining Tor (another semi-irregular favourite spot of mine).

Parking opposite the Cat & Fiddle pub, it’s only a short walk down the road to a track leading to Shining Tor. But it was seriously slippery – all full of glazed ice at the edge of the road. And the track itself was fairly glazed over with both black and white forms of slippery ice. Now I had been intending to get a bit of a walk in before stopping for photos, if for no other reason 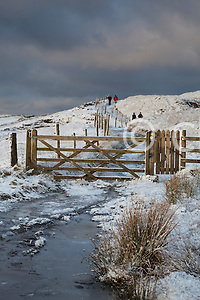 that to warm me up before stopping! But even at Morridge, the earlier clear-blue sky was disappearing fast as clouds gathered. I was really hoping that the light wouldn’t disappear completely, but the clouds would just add lots of interest as the light breaks through and gives that wonderful “storm light”.

My hope wasn’t in vain – I was only a short distance down the path, before I was seeing photos everywhere. The combination of frozen water and frosty tufts of grass in front of this gate with darkening clouds behind was an irresistable combination, especially when someone in red appeared on the horizon to add a spot of contrast to the image!

I felt a bit embarrassed that I couldn’t really stop and chat much with the walkers as they came past and started to tell me about other possible places that were (in their eyes) even better, but a chink in the clouds had appeared, and it looked like I had a very short window of fantastic light. Sorry, but in those circumstances the great photos I can see right now have to come first – the light may well go with no photos taken at all if I stop and chat for too long, even if that means I have to figure out the other spots myself, or miss the light on those! 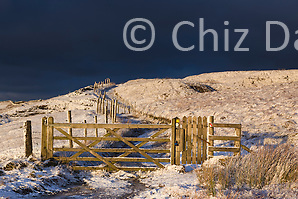 And with the magic ingredients of golden light falling from half-behind, dark and stormy looking clouds ahead, a reasonable foreground, snow on the ground and hoar-frost crystallised on every solid surface, I was in photographer heaven for 10 or so full minutes!

Now all I needed was a sunset and a short walk to complete the day. Sunset provided by turning round and looking behind me (ok and waiting for 20mins while I played with a less co-operative drystone wall!); short walk was to the summit and trig point of Shining Tor, and got back to the car just in time before it was completely dark.

But I still haven’t figured out an oddity of the weather – Cat & Fiddle and Shining Tor are a good 50-100m higher than Morridge. And the temperature was colder at -3.5C (when I got back), it wasn’t exactly lacking in wind either. But it wasn’t half as bitingly cold as Morridge was… Very odd.  Think I may need to revise my clothing list for the upcoming Bullstones event… (a mad but great fun traditional meet of my local mountaineering club, which involves sleeping out on a hillside after the pub shuts, followed by a long walk to basic accomodation for the second night. It’s always been an epic, hopefully this year it might be a snowy epic, rather than a drowned-rat-in-the-torrential-rain wet epic of some previous years!)

More images from the afternoon’s shoot in the slideshow below: