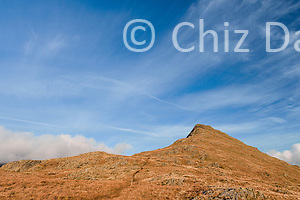 November and December 2013 will go down (in my memory at least) as being some of the wettest and windiest for a long while. Particularly frustrating when what I needed was calm, clear and cold (ie snowy!) conditions for wildcamping and night-time timelapse rather than a constant stream of near-hurricane strength gales and torrential rain coming in off the Atlantic.

So I was quite excited by Saturdays forecast – calm conditions, cold and clear skies. Even, could it really be true, some sunshine. Perhaps winter is finally coming!

Due to a late finish (and in the wrong part of the country!) by hubby Reu, we arrived at Lyn Ogwen late that night – although the forecast wasn’t living up to expectation – it was still raining slightly when we woke up, and somewhat grey as we had breakfast by the lake. But by the time the coffee was kicking in, a small shaft of sunlight was trying to break through on the Carnedddau. 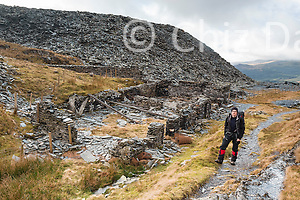 Onwards to our starting point of Rhyd-Ddu (pronounced Rhy-thee) on the western side of Snowdonia. This is the less popular side of Wales’s highest and most visited mountain and we were aiming for the southerly “forgotten peak” of Snowdon -Yr Aran. The north-south ridgeline of Snowdon arguably extends over a low col from the ridge of Allt Maenderyn to Yr Aran, before dropping either to Nant Gwynant or Beddgelert.

We made our way up the wide and easy going track towards the abandoned slate quarries, laughing about how long and tiresome it had seemed on a previous descent – in the dark and torrential rain. Such a difference with good weather and fresh feet!

The sun was now definitely trying to emerge from the clouds and it was feeling surprisingly warm. Perhaps we’ve skipped winter and springs arriving – you could be forgiven for thinking it was early April by the temperature! 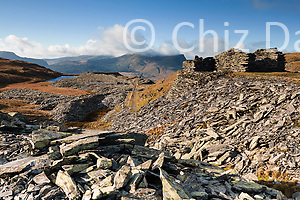 Arriving in the abandoned slate quarries below the col between Allt Maenderyn and Yr Aran, it occurred to me how strange it was I’d not been there in the past – being so close to the club hut, I should have come specifically for photos at some point in the past. But when heading out that way from the hut, we’d often short-cutted below the quarry and across the slope diagonally, in search of winter mountaineering routes around Llechog.

We stopped and made the most of the warm 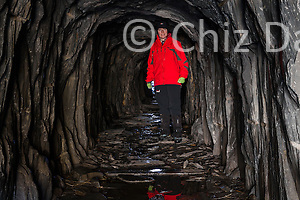 sunshine at the old quarry buildings – Reu exploring the wider area, me getting very snap happy. It seems a long while since the light had been good enough to tempt me into taking so many shots – sadly far more frequently it’s been a case of “how can I make this rotten light look half-way adequate enough”. So a real rare treat and one that had me grinning from ear to ear. Now if only I can get some of this light up in the Lakes this winter!

There was even an old quarry tunnel to explore, a narrow entrance lead to a dark passageway – just high enough to stand up in (well, perhaps not if you’re 6’6″ 😉 ) once you get past the initial crouching entrance. The quarry hole at the far end wasn’t overly exciting, but the passageway made for some interesting echoey sounds as I walked down it.

As I was playing with the camera a couple passed us – and we had a brief chat. I was dismayed to hear that they were also heading up Yr Aran. This is supposed to be a quiet, little known mountain – even on such a fine day we really ought to have it to ourselves! But by the time I’d finished playing with photos and they’d taken a bit of a short cut, we’d be ascending sufficiently far apart to feel we had the forgotten” peak to ourselves again. 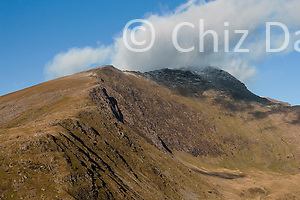 Rising onto the col was steep going over the slate tips and took a little bit of negotiating which way it went at the very end, but soon the view up to Snowdon and down into the valley below Y Lliwedd opened up from the col. The cloud was rising well now – and we could almost see the summit of Snowdon.

Turning right onto the ridgeline, we now had to descend slightly to the true col, crossing a very boggy section across the col itself. Once through a dry stone wall, the ascent began in earnest.

Steep this section was, with a couple of big steps up, but another drystone wall guides the way and the path is mostly reasonably clear (is this such a forgotten peak after all?). Where the wall turns a corner, the path turns too, and initially follows above it, to join the east ridge high up.

Trying to do a bit of research before setting out, I’d encountered a few hints that there might be a scrambling section on the north face of Yr Aran, and that the path would disappear into it, but there was no information as to it’s difficulty or enjoyment factor… But the way we went had no scrambling section at all – this clearly is optional and requires braching off the main path. Which didn’t look overly inviting – broken but steep ground, with no obvious clean line of ascent. 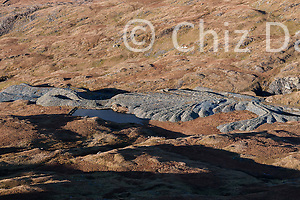 Our way along the E ridge was easy going, although the wind was beginning to pick up in earnest now, and had a real bite to it. We stopped several times on the summit ridge for photos – I was glad of the extra layers I’d brought – particularly some Bergans down mitts – which proved invaluable for thawing out the hands between bursts of photography. But the light was fantastic, and despite the cold and wispy clouds beginning to rising out of the valley and descend from Snowdon, it couldn’t dampen my spirits. This was what fell walking’s about – fantastic views, sunshine, a less-known but lovely peak and good company!

We descended into unknown territory off the summit, passing over some lovely ridgelines to Craig Wen. Things started to feel a bit more expeditionary then, over surprisingly undulating and boggy terrain – but mostly with a drystone wall for guidance (although in the dark or clag, it would have been far enough off the obvious “easier” going not to have helped much!). That still didn’t prevent a brief backtrack on encountering really rough ground near a rusty barbed wire fence (end of access land – we’d accidentally gone a tad far west).

As we neared the final descent above Beddgelert, the sheep tracks seemed to be heading a long way east, but this proved to be correct as we descended from access land to the bridleway by Perthi farm. (I’ve heard from locals that others have encountered issues ascending somewhere vaguely between Beddgelert and Craig Wen, but we had no such issues ourselves). Once past a few buildings, the track rapidly deteriorates from a clear vehicle track to a muddy and sometimes rocky and steep footpath. But it leads eventually to the road, just east of Beddgelert.

Now there was only one thing left to do… to round off the day with a well-earned pint at the Tanronnen Inn!