Skip to content
Home » Photography » Latest photography commission – TGO Magazine Autumn Edition – Edale Skyline
It’s amazing the pace of production these days. It seems only a couple of weeks passed between receiving a phone call from the editor of TGO Mag, to ask if I was free the day after next for a commission – photographing assistant editor Carey Davies as he walked the Edale Skyline – and the finished article being published and out on the shelves for all to see! (Autumn edition of TGO, p54) 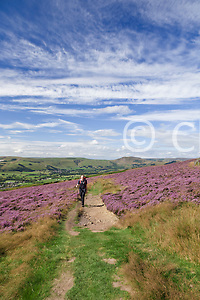 The weather forecast wasn’t too promising, although a great start was expected, thick cloud was due to come in from midday leading to heavy rain and even thunderstorms later on in the day. And given that Carey wasn’t able to leave his office in Glasgow before 6pm the night before, an early start wasn’t on the cards.

Reading through the finished article, it was quite amusing to read about Carey’s internal struggle to co-erce his legs into action. Little did he realise just how much my own legs were howling in protest at this sudden and unexpected return to hill-walking. (For a variety of reasons, (none of which mean I’ve given up walking at all!), I’ve been doing far more cycling than walking in the last year or two, which seems to get the muscles in rather different ways to walking!). But only a week before I’d seen the opportunity of an awesome ski-trip to South Georgia, so fitness hill-training had already begin in earnest. Time to extend it further!

And some careful studying of the map had seen a sneaky option for the photographer scared of being much less fit than the walker. A crafty head-start up the steep section of Win Hill through Twitchell’s Farm meant that I could take my time on the steepest section of the walk, without compromising the images required – and with 6kg of camera gear in addition to the normal walking clobber, that was much needed!

Knowing the forecast meant that later shots were less likely to have great light, I spent extra time on the early section of the walk, finding several locations to get different angles with the great light and awesome (if ominous, to those who know what they usually mean is coming!) cirrus clouds adding plenty of interest to the deep blue sky.

(For those that don’t know, cirrus clouds are the “mare’s tail” streaky clouds high in the sky. They’re formed by very fast high-level winds, which usually bring a change in the weather. As you can usually only see them in good weather, that change is inevitably for the worse, often indicating stormy weather not far away). 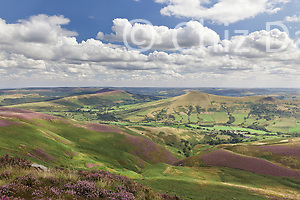 The views back from Crookstone Out Moor down Jaggers Clough were worth the climb!

The climb up Crookstone Hill is deceptive. It doesn’t look steep on the map (and isn’t really steep) but it goes on for a long way! And psychologically, you’ve done the steep  climb to get onto the skyline – so there shouldn’t be further climbing of this magnitude (howled the legs to me as I was trying to convince them to keep up with Carey), let alone having to face the steepest sections towards the top! But the view from above is worth it, with a fantastic vista down Jaggers Clough, and Win Hill now looking rather small and distant on the skyline.

We find plenty of rocks to play with on the edge here – taking advantage of both their scrambling and photographic opportunites, including the fantastically weathered rocks of Ringing Roger and Nether Tor. But it’s clear the weather is already closing in, and by the time we reach the northern indentation of the head of Grindsbrook clough, the light is not at all good photographically. I take a photo in case Carey really needs it for illustrative purposes, but can’t really see it being used, the light is just too flat for a part of the walk that’s much less scenic than most! 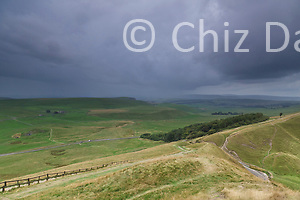 Incoming storm as I wait on Mam Tor

Reaching the junction of paths near Grindslow Knoll, my second sneaky tactic for keeping up with Carey comes into play. Banking on the weather having turned by this point, and knowing that only the Wool Packs stones will be another good photo opportunity for a while (and I have got a few images in store of them if really needed!), I’ve arranged that I sneak down Grindsbrook Knoll into Edale, where a mate with a car is waiting for me. I get a refill of water, and a hasty tea cake snack, before whizzing up to Mam Nick to await Carey’s arrival from Brown Knoll. (Aptly named, as it’s flat and squelchy peat-bog country). Forming no part of the typical Edale Horseshoe of Jacob’s Ladder to Grindsbrook, or Kinder Circuit, or the Castleton circular over Mam Tor and Hollins Cross and not having much in the way of interesting rocky outcrops or edges to offer the visitor, Brown Knoll is rarely walked other than as part of the Edale Skyline. (And imho doesn’t offer anything in the way of photographic interest!)

So as the predicted rainstorm settled in, it was time to hunker down on the side of Mam Tor, waterproof cover on my rucsac, camera in Stormproof Aquapac bag (a godsend in weather like this, as I can have it handy outside the rucsac in case of a break in the rain, with no fear of the camera getting wet!) and me all togged up in waterproofs, Paramo Aspira hood tightened up to the max to keep the driving rain off my head and Berghaus Extrem insulated jacket keeping me nice and snug underneath while I wait for Carey to appear out of the torrents now raining down on Rushup Edge. 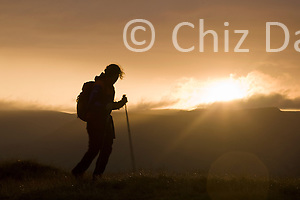 We grab a quick shot on the summit of Mam Tor – I choose not to wipe the raindrops off it, as in the conditions, it rather speaks volumes about what the weather was really doing –  before heading rapidly down to Hollins Cross. There the worst of the squall has passed, and hints of the treat on LoseHill appear in the form of rays of light sneaking under the clouds looking back towards Brown Knoll and Jacob’s Ladder.

We continue up past the mist-clad Back Tor, and onto Lose Hill. I still don’t believe we’re really going to get anything outstanding image-wise, but for the sake of illustrating the story I convince Carey we need a shot of the final summit. So out comes the flash and the tripod (the light is fading and the clouds are making it very dull) and I start to think that perhaps a view with our starting summit of Win Hill in the background makes the most sense. But while I’ve been faffing with gear, Carey notices the first hints of an awesome golden glow developing in the west, and we soon scrap the original plan and instead set up some fantastic summit silhouettes. Job done, we can then enjoy the last romp downhill to the Cheshire Cheese pub.