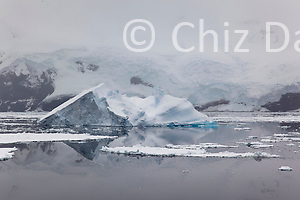 Another remote, peri-Antarctic island, this time Peter 1 off W Antarctica. Note the steep icy cliffs - S Georgia is likely to have a similar type of coastline! (Chiz Dakin)

Imagine Scotland in winter – one of those winters when it hovers around freezing, and the wind is howling. Now multiply that wind-strength by a factor unique to the roaring forties and fifties of the southern hemisphere. Add a crew of men who have survived their ship being trapped in the pincer-grip of the Weddel Sea’s Antarctic icepack for eight months, before living on an ice-floe for a further five months then drifting in a lifeboat from the edge of the ice to Elephant Island (where the majority of the ship’s crew remained, waiting for rescue). And having faced an 800mile journey across the stormy Southern Ocean to the nearest navigable inhabited land at S. Georgia in little more than an open lifeboat, storms then forced them to land on the wrong side of the land, leaving just three members fit enough to attempt an incredible 36hr, non-stop, traverse of the island’s interior mountain ranges to regain contact with the outside world, and begin a rescue attempt for those left behind on Elephant Island. This journey is “a trial for fit men, properly clad, but these men were neither” (Roland Huntford, “Shackleton”, 1985)

I’ve got a unique opportunity to be part of a team following in Shackleton’s footsteps across S Georgia. We’ll have a lot of advantages over his team – we’ll be starting afresh without the privations of such an extraordinary feat of survival over the preceding months (having travelled by a modern, comfortable ice-strengthened ship from the Falkland isles), we’ll have a good supply of food and fuel for stoves, we’ll have three days rather than 36hrs, and we’ll also have tents and sleeping bags for shelter. Perhaps as importantly, we’ll have skis, which were the one thing that British polar explorers of the early 20th century really hadn’t understood the benefits of.

But, we’ll not have the advantage of being able to wait for a weather window (Shackleton delayed his crossing for a few days until favourable (ie not windy) conditions arrived), and we’ll have the weight of gear that comes with a modern expedition – 35kg is what I’m told our pulks (sledges) are likely to weigh! We’ll also not have the drive behind us that if we fail, other’s lives are also doomed, which must have counted for some mental determination to make it to one of the whaling stations on the eastern shore. And I fear the other team members may be seriously fit too!

I am hoping to make a short (3min) documentary film based on this crossing, and at the very least will bring back a series of professional quality images from the expedition. I feel this is particularly important, as the original crossing wasn’t photographed, Frank Hurley (Shackleton’s expedition photographer) having been one of the many remaining on Elephant Island. It will be an epic trip for me in many ways, professionally it’s been a lifetime ambition to document an expedition in polar climates, and the historic connection on this one is some serious icing on that cake; physically it’s likely to be very demanding, especially if the wind is blowing at it’s usual near hurricane strength; emotionally, Shackleton can rightly be regarded as one of the heroes of the Polar age, simply for his strength, dedication and success in not losing a team member’s life in any of his expeditions – no matter what the conditions threw at them, and it will be an honour to follow in his footsteps over that final traverse of an icy glaciated, mountainous interior.

(For those of you wondering why he didn’t walk around the coastline – it’s a sheer cliff and impassable in far too many places – the mountains were quite rightly regarded as the faster and less dangerous option!)