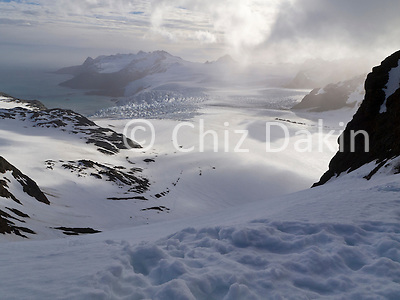 This shot was taken from the Trident Col during a break in the clouds shortly before we set off back down the Murray Snowfield to head for Possession Bay.

At 7:20am, it was fairly late in the morning (even without our early wake-up call from the wind, on a trip such as this you can expect to be up anywhere from 3-4am onwards – so 7am is several hours into the active day. And that’s hard for a night owl like me!)

We’d been woken up even earlier though – by a moderate breeze of force 7 (steady) to 11 (in gusts) at 2:30am. I say moderate breeze – that’s by South Georgian standards of course, as the wind can regularly reach 100+mph!

The photo shows the view looking eastwards over the Crean Glacier towards Antarctic Bay – and shows just how far below the Crean glacier seems to be from the Trident Col itself.

It’s actually about a 400m descent – from 600m on the Trident Col to about 200m on the Crean glacier but it really feels a lot higher when you’re standing on the col. No wonder Shackleton and Worsley over-estimated the height of the col at 1500m above sea level! And on a still image you don’t get any sense of the strength of the wind…

One thought on “Image from the Trident Col, South Georgia”