One of the many former railway lines now converted into a recreational traffic-free route for walkers, cyclists and horses, the Monsal Trail runs along the former Midland Railway line, linking Buxton to Bakewell and routes south. Created in 1863, one of the key features of this route is the Monsal Head viaduct – which John Ruskin, a famous social commentator of the 19th Century, so famously commented on when it was proposed. (He suggested that being able to exchange every fool in Bakewell for every fool in Buxton in half an hour was not worth the loss of such a pretty valley). This viaduct is now a listed building and attracts visitors from worldwide to view it – these days as part of the scenery! 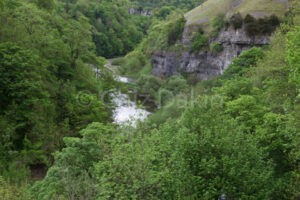 The rail line fell victim to Dr Beeching’s axe in 1963, and was purchased by the Peak District National Park Authority in 1981. At this point (perhaps earlier), the tunnels were closed for reasons of public safety (as they were falling into disrepair after so many years of disuse), removing the fantastic view over the limestone cliffs and sharp bend in the river at Water-cum-Jolly from any public access – it became “trapped” between the two closed tunnels of Cressbrook and Litton. No bridleway access was viable around these tunnels, so the diversions followed footpaths, some quite difficult in places.

In 2009, the Peak National Park gained funding from the Department of Transport through Cycling England (sadly now abolished in the ConDem budget cuts of 2011) to begin work on renovating and reopening the tunnels on the Monsal Trail. This is seen as part of a wider more regional plan to link Buxton to Bakewell and Matlock with further extensions to the Monsal and High Peak Trails. (Which, if completed, will create a traffic-free cycle route between railway stations from west to south-east across the Peak District, phase 2 to create the stretch from Matlock to Bakewell via Rowsley is now at planning and funding bid stage).

£2.25m was spent on Phase 1 of this grand across-Peak route, to reopen the tunnels, including £60k on clearing debris from/surveying the tunnels, £360k on tunnel repairs, £400k on resurfacing work, £650k on low-energy daylight-controlled water-resistant lighting. The tarmac surface in the central strip of the tunnels makes a welcome easy-to-ride surface in lower light conditions, but if you stray off it at speed, the “ballast-like” edge can be quite unnerving (as one less lucky soul discovered on Friday – it slowed her down very quickly, if not entirely in control – and no, it wasn’t me!).

The official opening of the tunnels is May 25 2011, but I was lucky enough to be at the press day prior to the official opening of the tunnels. Before meeting up with others, I made this short video of a quiet run through Headstone Tunnel just after it re-opened to the public. It’s a bit shaky (the home-made camera mount proved not to be as stable as I’d hoped, and Mk 2 of CycleCamMount needs to be developed urgently!) but it gives a flavour of the Headstone tunnel heading eastwards on a quiet day!

1st run through Headstone Tunnel on the Monsal Trail from PeakImages-Video on Vimeo.