From the partial information received, it appears that the world of robotics may be about to be turned on its head with the application of relatively low-tech technology to solve one of the world’s perennial problems. That of not enough time to do everything and in some remote communities the distances involved between communities and even to the nearest drinking water supply, shops, or even medical supplies being several hours to days walk away. 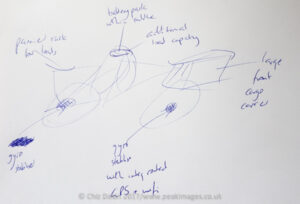 The invention appear to take the gyroscopic stabilisers from the world of drone technology, attach them to the hub of a specially designed bicycle to keep it upright without a rider, and then partner with a mapping and route planning application for users to control where the bike goes and when – and to keep tabs on where it is at any given time.

Rumours abound that the UK’s Viewranger – known for their mobile mapping application – and Raleigh – with a modern day equivalent of their classic 1970s Shopper bike –  may be involved. The drone technology gyroscope partner is as yet unknown. However no company was able to comment on the existence or otherwise of this research and development.

However, we were able to speak to Apelila Enganar of Global Bicycle Aid – an organisation involved in the distribution of low-tech sustainable solutions in developing countries who commented “This sounds a fantastic project and one which could give people in remote communities a great boost in being able to save time on daily chores such as collecting water, or taking products to market – or even collecting essential medical supplies. We understand that it’s still a way from reality – there’s a few issues with battery life – but we look forward to the day it comes to fruition! It could even become a practical off-road version of those futuristic driverless vehicles you hear about in the States!”

Editors Note: Please note the publication date! (You may also wish to check the Samoan and Galician translations of Mrs Enganar’s name… 🙂 )